Gavin Hood’s “Ender’s Game” is like a CliffsNotes version of a book that still reads well.

Asa Butterfield leads as Ender, a young boy who’s plucked from his family on earth and enrolled in Battle School in space. There, under the supervision of Colonel Graff (Harrison Ford), Ender is trained to become a leader within the International Fleet so the humans can squash an alien race called The Formics and eliminate the threat of future invasions once and for all.

Orson Scott Card’s book takes place over the course of five years. Ender is recruited when he’s just six-years-old and the narrative concludes when he’s 11. The concept of a six-year-old showing signs of militaristic prowess can be tough to digest, but Card then gives Ender such a thorough and thoughtful build throughout the book that by the time Ender reaches his final exam, you know he’s ready for it. Gavin Hood, however, does not have that luxury.

Age isn’t mentioned in the film, but because Butterfield himself is a teenager, it’s only natural to suspect Ender falls within that range and it works. But, the real beauty of “Ender’s Game” is that it isn’t just about making these characters look as though they’re mature, fit and bright enough to be tactical geniuses rather it comes down to the balance between those qualities, a youthful malleability and hint of childlike immaturity.

We first catch Ender in action while he’s in school on Earth. That sequence absolutely nails the representation of the gap between the parts of Ender that depict him as an average kid who’s just trying to fit in and those that make him a prodigy, and by finding so much success in that respect so early on, it gives everything that follows an exceptional amount of depth. “Ender’s Game” isn’t just some outer space boarding school adventure. There are very precise reasons for every single element of the Battle School curriculum and each and every one of them bears a significant amount of weight because of the range Butterfield achieves.

It’s hard to imagine any other young actor pulling off this role quite like Butterfield. One moment, Ender is stoic and thoughtful, carefully planning the most sensible move to make, whether it’s an attempt at maintaining a friendly conversation or a play to win a Battle Room game. His expression is so calm and knowing that he makes you feel as though everything is under control. He behaves as such 80% of the time, but the other 20% is something entirely different and it’s something that’s rarely seen. Ender can get violent, but those moments aren’t temper tantrums and you absolutely cannot call him a loose cannon. Ender is constantly assessing every situation he’s in and even though he may not want to hurt someone, if it’s the most logical and beneficial thing to do, he’ll do it, and that’s why he’s IF material.

When you’ve got someone as famous as Ford on the roster, you get the star-power boost, but you also run the risk of moviegoers failing to look past the famous face and just see the character. However, that’s far from the case with Ford. Similar to Butterfield and Ender, Ford is Colonel Graff. He’s such a natural fit for that role that that alone does a good deal of the work for him. But, what makes Graff an exceptional performance for Ford is his chemistry with Butterfield. The relationship between Ender and Graff is absolutely fascinating to follow because it’s deeply connected to every element of the story. Every single thing that happens in “Ender’s Game” tips the scale of their connection until one event pushes it so far over, that the relationship explodes in a particular scene that marks a major triumph for both actors.

Per usual, Ben Kingsley has no trouble slipping into his role as Ender’s Command School trainer, Mazer Rackham. He doesn’t get as much screen time as Ford, but in the little time he does have, Kingsley manages to make those face tattoos less of “a thing” and turn Rackham into a standout character with a unique drive and training style. Violas Davis makes a mark too as Major Anderson. She’s Graff’s #2 and the more compassionate of the two. You’d expect that her efforts to continuously remind Graff that the Battle School students are just children would serve as a source of comfort, but Major Anderson’s actions wind up infusing the film with an intense amount of unease because they put the scenario into perspective.

Of the young cast members, Hailee Steinfeld is the standout as Petra Arkanian. Aramis Knight, Suraj Partha, Khylin Rhambo and Conor Carroll all have their moments and it’s a thrill to see the gang come together, but Bean, Alai, Dink and Bernard merely get moments whereas Petra gets layers. Abigail Breslin does a fine job as Ender’s sister, Valentine, but without the perspective of what she’s up to on Earth while Ender is at Battle School, that character doesn’t carry even a fraction of the weight she does in the book.

On the visual front, Hood makes some bold choices. Some work and some don’t, but the only missteps that actually impair the experience are the wide shots in the Battle Room. You do need establishing shots, especially for an unknown game space like the Battle Room, but beyond the first few looks at the arena, the rest of the wide shots are meaningless because it’s tough to make out the colors on the suits designating the player’s army and it’s absolutely impossible to catch a glimpse of someone’s face at that distance. However, when Hood brings the camera in and the Battle Room action focuses on very particular tactical efforts, the sequences really do get you on the edge of your seat.

Hood also establishes an unexpected, but wildly successful tone for the film. There are loads of sequences that’ll have you rooting for Battle Room armies or indulging in the boarding school bonding, but “Ender’s Game” also adopts this horror-like tenor. Because there’s such a big twist at the end of the film, folks who have read the book and those who haven’t are bound to have an entirely different experience. Based on some very vocal reactions during the screening, that twist will hit hard for those who are unfamiliar with the source material. And for those who do know what’s coming, that foreboding sensation that comes with that unique tone makes the reveal just as affecting, but in a different way.

With a running time of just under two hours, it was absolutely impossible for Hood to recreate the experience of reading the book. Watching Ender grow up at Battle School, build his skills and slowly become the brilliant leader the International Fleet hoped he would be is sorely missed, but the film version still functions as a highly entertaining and effective abridged version. 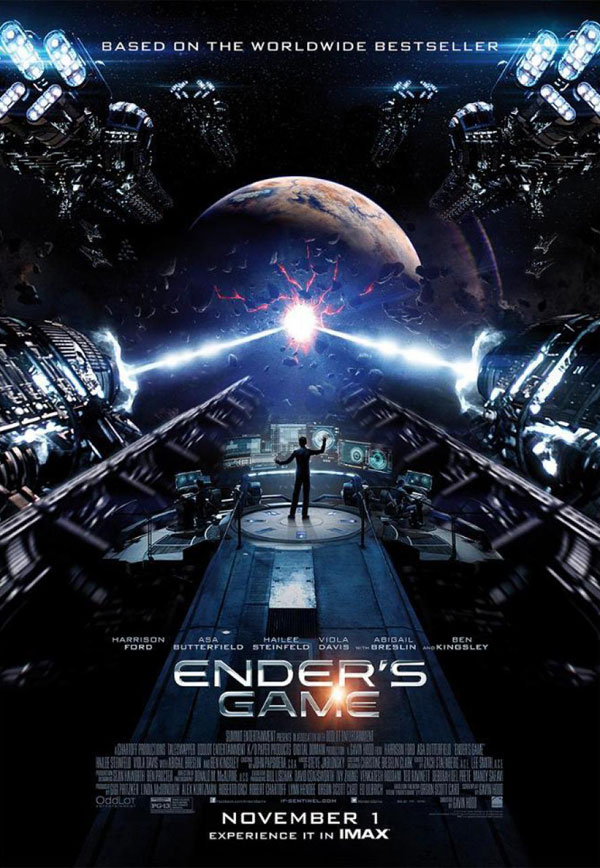 Cancel reply
Watch Fun Little Movies for Free on FilmOn
Ryse: Son of Rome Takes to the Path of Vengeance
To Top