An adaptation of American literary icon Jack Kerouac’s 1962 autobiographical novel of the same name, “Big Sur” is amongst the latest big screen stabs at capturing some of the lilting, freewheeling qualities that defined the groundbreaking Beat Generation. Written and directed by Michael Polish, however, this frustrating, somnambulant, dramatically stillborn slog instead serves as an arty vehicle for little more than a rolling delivery service of smugness, hedonism, pretentiousness and self-destruction.

A premiere at this year’s Sundance Film Festival, “Big Sur” takes place after the huge commercial success of its central figure, an author, when he’s driven mad by the resultant fame and psychological clutter it brings. Unlike the novel, which uses pseudonyms for all its characters, Polish’s take directly embraces Kerouac’s identity (and all else upon whom characters are based, save one), giving the film, in theory at least, some measure of post-“On the Road” heft.

Gratefully taking up fellow Beat poet Lawrence Ferlinghetti (Anthony Edwards) on his offer to use his Bixby Canyon cabin as a place of respite, an emotionally fraught Kerouac (Jean-Marc Barr) at first uses the opportunity to reconnect with nearby old pal Neal Cassady (Josh Lucas) and his wife Carolyn (Radha Mitchell), among others. Crippled by alcoholism and put off by America’s narcotic slide into suburbanism, Kerouac slips into a relationship with Neal’s mistress, Billie (Kate Bosworth), but in short order finds himself unable to provide for her and her son, in any substantive shape or form.

Polish (“Jackpot,” “The Astronaut Farmer”) and cinematographer David Mullen capture the natural beauty of their on-location surroundings, and with music overseen by KCRW tastemaker Chris Douridas and a score contributed by indie band The National, “Big Sur,” in brief snatches, fitfully evokes both pockets of woozy melancholy and more broadly an era gone by. But rather than actually dramatize events in the lives of its characters, Polish and editors Robert Frazen and Geraud Brisson more frequently opt for little snatched ribbons of scenes. The tack is clearly meant to give the movie the slipstream feeling of a stream-of-consciousness connection, but it only drives a wedge between viewers and the material.

Naturally, since this is a Beat work, eloquently expressed moroseness looms large. And oh, a torrent of words tumble forth, but when not offering up tense-mangling summations of things that could more artfully be expressed in a silent glance or two (“I could see in Neal’s eyes that he can see in my own eyes the regret we both feel that recently we haven’t had chances to talk like we used to do, driving across America”), Polish’s over-reliance on the stomach-churning unhappiness and inner turmoil of Kerouac’s text just as often comes across as generally intrusive.

The gnawing ambivalence and self-destructive swan dives of hard-drinking creative types need not automatically require a telling that seems to have its head up its own ass (Bent Hamer’s entertaining “Factotum,” studded with dark delights, comes to mind). But with first the tedious “On the Road” and now “Big Sur” — which offers up faux-deep ruminations about the character of a man based on how he chops wood, and knee-jerk melancholy triggered by a dead otter and mouse — Kerouac seems to be Kryptonite for filmmakers laboriously searching for a little profundity. 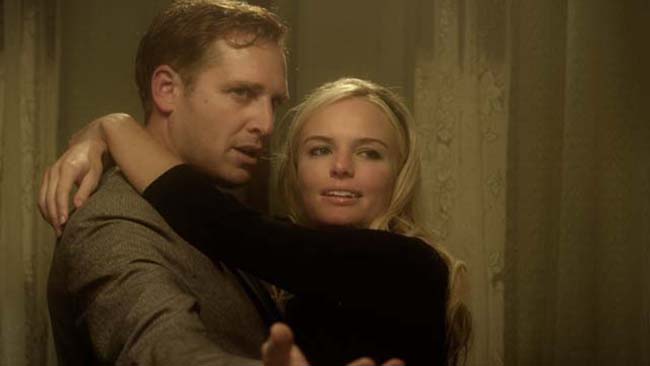