When I was a kid during World War 2, I would note that everyone on the subway would be reading a newspaper, usually the Daily News, the Daily Mirror, or the NY Post. Take a look nowadays and you’ll likely find nobody with a paper in hand but many, instead, with a gadget that appears glued to every young woman’s left hand from which she presses buttons. That’s the extent of reading and writing enjoyed especially by today’s under-35 generation. These folks would find it incredible that at one time, an eleven year old girl, illiterate to boot, would learn to read and fall in love with books to such an extent that she would even risk censure by the authorities when she dared to save a volume from the fires of the Nazi book burners.

The time of this girl’s coming of age is 1938. The book that tells us all about her is by Mark Zusak, a best-seller which has now been adapted by Brian Percival into a quiet, serious, leisurely paced movie, script by Michael Petroni, a film that pays homage to some people’s humanity when that important trait is being squashed by the Nazi onslaught. There are just a few melodramatic touches: an air raid with devastating effects when shattering homes and killing sleeping civilians of a small German town; the beaten-up of a man while a crowd watches; the breaking of glass in Jewish-owned stores on Kristallnacht; the fervent singing of “Deutschland über alles.”

In adapting the book to celluloid, Percival and Petronia needed to drop some subplots, but we all get the zeitgeist, the spirit of the times, from this solid movie which could find an audience of all ages. (Its PG-13 rating should encourage parents to take their little ones to the movie, particularly since it’s told from the standpoint of an eleven-year-old.)

As narrated by Death (Roger Allam) whose presence bookmarks the story and who warns us that “nobody lives forever,” we are introduced to the one living person in whom the Grim Reaper is interested during her time on earth. That person is 11-year-old Liesel Meminger (Sophie Nélisse—a French Canadian actress), who travels by train with her mother and her younger brother, the sibling dying during the ride. The mother is presumably arrested by the Nazis for being a communist, and Liesel is brought up by the termagant Rosa (Emily Watson) and her husband Hans Hubermann (Geoffrey Rush). Because Hans does not join the Nazi Party, he is essentially unemployed but is a mensch, the sort who would have no truck with extremist political views and who gently and patiently teaches his adopted daughter to read and to love books. In fact Liesel’s romance with the printed page motivates her to steal—or “borrow”—books from the home of the burgomeister’s wife, Frau Hermann (Barbara Auer) whenever Liesel arrives with the laundry that Rosa prepares to get by.

Much goes on in Liesel’s life to make 1938 and the seasons following the years of her coming of age: her friendship with next-door neighbor, young Rudy (Nico Liersch) who, despite his golden-blonde locks and clipped hair style has no love for the National Socialists and whose major goal at age eleven is to kiss Liesel; the lessons she receives from Jewish Max Vandenburg (Ben Schnetzer), who is being hidden by Hans and Rosa because his father saved Hans’s life during World War I. The cryptic message she gets from Max is that Jews are despised because they remind people of their humanity.

The film is slow-moving, respectful of an audience that does not require many explosions or melodramatic flourishes during the war, photographed by Florian Ballhaus to evoke the temper of a small town, swastikas on every street corner. In other words, don’t expect the vivid action of “Inglourious Basterds” (a plan to assassinate Nazi leaders) or of “Blackbook” (Dutch resistance in action). No SS or German soldiers shot or stabbed from behind, no trains derailed by the Resistance, not even news coming across of German actions to take Moscow. Though you may chafe at the use of English with only a few German words like “nein” and “ja,” the English subtitles for extended sentences are clear.

In other words, though the war is the obvious background, we’re treated to a young person’s love of books, an affection that could have been acquired anywhere. Nor does it hinder the story that it’s anchored by Sophie Nélisse’s authentic performance as a kid who like others of her time are forced to grow up too fast. 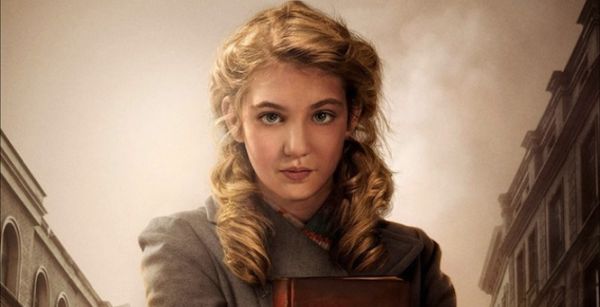