Familial dysfunction on the big screen is nothing new, of course, but it seems like a whole bumper crop of starry-eyed American indies — from “Smart People” to “Jesus Henry Christ,” and many more — have rushed to throw a light on fractured home life and assorted seriocomic neuroses in the wake of the Oscar-winning success of “Little Miss Sunshine.” Into the breach enter yet another entry in that canon: “Cold Turkey,” written and directed by Will Slocombe. Previously titled “Pasadena” (for its upper-crust setting), this Thanksgiving-set ensemble black comedy about mixed siblings jockeying for attention and material bail-out from their dad, will try to scare up some business rooted in knowing laughs before the real-life holiday, but its wound-up bickering is all show, devoid of any attachment to real characters, feelings or problems.

“Cold Turkey” centers around patriarch Poppy Turner (Peter Bogdanovich), an erstwhile Stanford professor who fumbled away a bunch of his credibility vouching for the peaceful transition to democracy after America’s invasion of Iraq. Poppy has two daughters from his first marriage and a son who is in law school, Jacob (Ashton Holmes), by his second wife, Deborah (Cheryl Hines). In addition to Jacob and his girlfriend Missy (Amy Ferguson), Thanksgiving brings home oldest daughter Lindsay (Sonya Walger) and her husband TJ (Ross Partridge), plus their kids. For the first time in 15 years, meanwhile, youngest daughter Nina (Alicia Witt) also deigns to break bread with her hated stepmother, blowing into town late with her truck-driving boyfriend Hank (Wilson Bethel) in tow.

Immediately, and predictably, the wheels on this gathering come off. Free spirit Nina, with her pink hair, is a bundle of passive-aggressive fury excused away under the sobriquet of “straight talk.” This rankles Jacob and Lindsay, but neither seems able to directly or effectively call shenanigans on their sibling. One by one, then, Poppy’s children come to him seeking money. Jacob’s debt, at over $22o,000, is the most serious, but each kid has what they feel is an urgent and compelling reason for favor. Unbeknownst to them, however, their father may not be in a position to financially support them any longer.

Small bits of Slocombe’s dialogue here and there have a pinch of engaging snap (“I’m the one that gets to be on the receiving end of all your shitty, failed trying, so I get to use whatever analogy I want,” rages Nina to her dad at one point), but it comes in the service of characterizations that across the board feel flat and colorless. Mostly, though, “Cold Turkey” just spins its wheels, uncertain of where to focus. A good start would be the jettisoning of all of the “significant other” characters, freeing up time and space to more believably root down into the fragile dynamics between the children and Deborah — whom the movie posits as some sort of lightning rod without ever really showing a convincing reason that is true.

The reasons the Turner kids need money are kind of ridiculous, but only one in a manner that says something meaningful about the character. There’s also some nonsense involving an outed affair with a neighbor, obliging Victoria Tennant to pop in for the movie’s anticipated, dinner-gone-wrong centerpiece scene. The layered arguments in this sequence (wherein magically one character knows the business of all of the others, presumably from eavesdropping) are numbingly stupid, as if Slocombe thinks overlapping dialogue in and of itself indicates dramatic tension. But the film really jumps the shark or nukes the fridge or swallows the lead pill of stupidity — however you want to say it — with a scene-capping act of mock-outrageous violence that serves as a cathartic response to… a years-old act of disrespect never seen, or previously mentioned.

It’s at that point that “Cold Turkey” stops being just shrug-inducingly “meh,” and in fact outright irritating. In an effort to underscore the movie’s “Suburban Tension” while still keeping things kind of light, Slocombe uses twinkly, ironic music that in reality serves to only further call attention to his film’s dramatic inadequacies. Flexing her musical chops over the end credits in a tune with Ben Folds entitled “You Can Go Home Again,” Witt delivers an airy song that the previous 83 minutes have served to contradict.

NOTE: In addition to its theatrical engagements, “Cold Turkey” is also available across VOD platforms. For more information on the film, visit www.ColdTurkeyMovie.com. 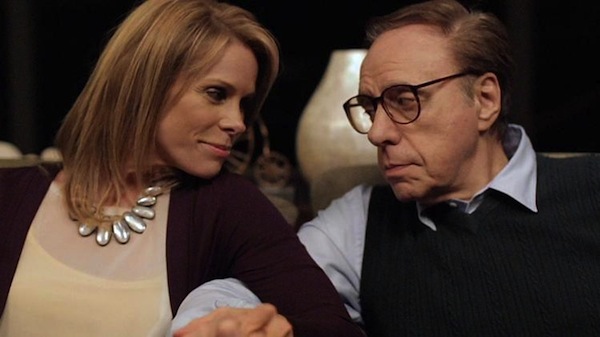