If American animation has, in aggregate, been a bit underwhelming this year, a stirring reminder of the medium’s possibilities arrives in the striking “Rio 2096: A Story of Love and Fury,” a love story spanning six centuries. Directed by Luiz Bolognesi, the film — not unlike “Cloud Atlas” or “The Fountain,” to name but a couple recent high-profile films which touch upon themes of loss and reincarnation — marries a moody and evocative rumination on human frailty with animation possessing an uncommon lyricism and beauty.

Winner of the Best Feature prize at the 2013 Annecy International Animated Film Festival, “Rio 2096” opens in 1560 in the Brazilian jungle, and revolves around the love between a noble Indian warrior, Abeguar (voiced by Selton Mello), and Janaina (voiced by Camila Pitanga). When the former is felled, he takes the form of a bird, and scours the country for hundreds of years, searching for his lover. In 1830, against the brutal backdrop of slavery, they reunite, and do so two more times as well — always struggling against oppression.

Passing through colonization, indentured servitude, military fascism and decades into the future (in which a war for water in an era of competing private militias is well imagined), the movie’s narrative offers up no shortage of nasty, brutish stuff — there’s murder, of course, as well as cannibalism and the nasty implied rape of one of Abeguar and Janaina’s daughters. Bolognesi uses a variety of animation techniques, though, including deep-focus and cross-fades, to render this potentially dark-hearted view of humanity with an engaging beauty that belies a permanent embrace of pessimism. It helps that the film’s love story, in Portuguese with English subtitles, is sketched so wonderfully, and economically. But “Rio 2096” is also plainly gorgeous, and could play and emotionally connect based on its visuals alone. 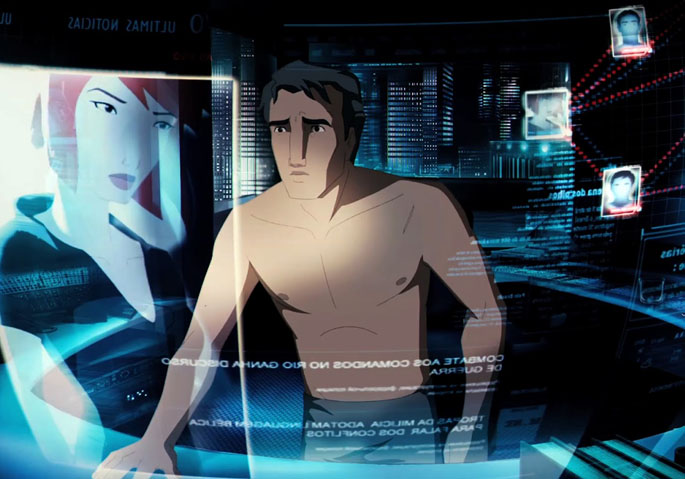