Title: Sarah Silverman: We Are Miracles

Sarah Silverman has embraced edginess and shock throughout her career — from joking about hoping investigators find semen in her dead grandmother’s vagina (a comment about dying from natural causes) to courting controversy with a Conan O’Brien appearance satirizing the racist thought process and, last year, offering to scissor “through to completion” casino magnate and Mitt Romney financial backer Sheldon Adelson if he instead donated money to Barack Obama. The inimitable stamp of her dark, tart personality is again on rich display in her latest stand-up comedy offering, and somehow her first HBO special, “Sarah Silverman: We Are Miracles.”

Directed by frequent collaborator Liam Lynch, the show was taped in front of an intimate audience of just over three dozen at Los Angeles music and comedy club Largo, and it includes a framing device wherein Silverman — poking about outside before going on — is mocked by a group of pot-smoking Hispanics for the show’s “intimate” nature. Truth be told, it feels odd to begin with, too; the nature of a good bit of Silverman’s humor, while not nakedly constructed to provoke, is inevitably designed to elicit groans as well as laughs, and there’s something special about the way she can seek out and exploit seams of unease within a larger crowd.

Silverman touches a bit on growing up nominally Jewish in 1970s Maine, but the show is hardly a trip down memory line any more than her normal material — despite the comedienne’s musings on her 19-year-old dog and a happy recollection of showering with her mother as child, and water “piking off her ’70s Jew bush,” creating the adolescent Silverman’s own special spigot. Mostly, “We Are Miracles” is a random (not in a bad way) grab-bag of ruminations, unburdened by constricted theme. Silverman pontificates on Scientology, but concludes it’s weird mostly just because it’s new. She notes that people who say “threw me under the bus” say it a lot. She pines for the fact that music is not attached to traumatic events in real life, and announces that she’s taking “What a country!” as her new catchphrase, noting that she knows Yakov Smirnoff used it in the 1980s, but that she’s “re-purposing it with a malaise.”

When Silverman turns to rape jokes (“No woman asks to be raped — I actually do think some women are asking to be motorboated”), she offers up a bit of a deconstruction, noting that comics like them because they make them seem edgy. As with a later sex joke, she here indulges in a bit of analysis to audience reaction to her jokes (“Who’s gonna complain? Rape victims? I would say traditionally they’re not complainers”), but it’s never in the water-treading manner that many lesser comics engage in. When she observes a gender-split effects to a twist in one of her jokes, it adds an additional wry layer of commentary to the material. Silverman is plenty smart, and has an enjoyably warped perspective that includes shrewdly observed, amusingly idiosyncratic takes on a wide variety of topics. That her comedy connects or overlaps with a lot men shouldn’t for some reason be held against her.

NOTE: “We Are Miracles” premieres tonight on HBO, and plays throughout the next several weeks. 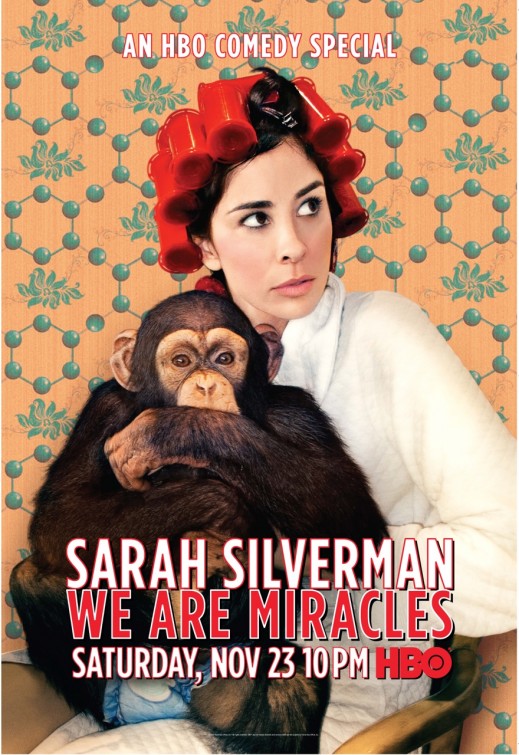