In the Spike Lee film, Brolin stars as Joe Doucett, a deplorable advertising executive who has all the time in the world to drown himself in alcohol, but none to spend with his daughter. During one particularly drunken night, Joe is snatched off the street and wakes up trapped in a small room. After 20 years of solitary confinement and dumplings, Joe is suddenly released and challenged to figure out who ordered his lengthy prison sentence and why.

Again, the concept is highly intriguing. Joe is an absolute jerk. Brolin doesn’t just play the guy as a misguided man who needs to learn a lesson. Not only is his behavior at the office totally inappropriate, but a short while later, we’ve got to watch him rolling around in his own vomit only to get up and continue drinking. However, even though the thought of having to spend one more second with Joe might make you cringe, when someone – anyone – is suddenly kidnapped and imprisoned, you can’t help but to wonder why.

Whereas Joe is utterly revolting prior to commencing his lengthy sentence, while in this hotel-like prison, Brolin delivers a masterful display that’ll warp your perception of the character. It’s a relief that Joe is off the street and getting what he deserves, but, at the same time, you can’t help but to relate to the madness of being locked away, all alone and not knowing why. Then, Brolin amplifies that need to know further by showing Joe change. The transformation involves some rather outrageous incidents and ultimately churns out a completely different person, but even though Joe emerges anew, Brolin maintains a semblance of Joe’s earlier self throughout, making his experience in the prison believable and engaging and, therefore, far more effective than the rest of the film.

After spending a good portion of “Oldboy” dying to know why Joe is locked away, his post-prison exploits should be particularly thrilling, but instead, it’s quite the opposite because the answers to all the questions are so disappointing.

The first most glaring issue is that Joe comes out of the prison with superhuman strength and combat skills. Sure, he passed some of the time by getting in shape, but you don’t see too many people walking away from prison sentences with the ability to crush a band of football players without breaking a sweat. Then there’s Elizabeth Olsen’s Marie Sebastian who strikes a totally unsupported connection with Joe, compelling her to completely overlook the fact that she doesn’t know him and he behaves like a violent lunatic. Joe’s revenge mission does have some downright gorgeous fight sequences – namely a three and a half minute one-shot during which Joe takes out dozens of thugs – but not even the most brutal, sexy or thrilling scenes bear much weight because without the context of a powerful mystery, they feel more like fleeting visual treats and not essential components of a captivating story. After plowing through a narrative filled with elements that don’t coalesce to create a build, you know there’s no way to pull off that colossal twist and sure enough, “Oldboy’s” big finish falls totally flat.

But the film’s grand finale also begs the question, would someone who hasn’t seen Park’s original have the same reaction? Lee’s film isn’t a cut and paste, but the outcome is similar enough and knowing where Lee’s rendition is going totally colors the experience. A similar issue cropped up with the recent release, “Ender’s Game.” That book also rocks a big twist, but knowing what’s coming there doesn’t deflate the shock-value, rather it creates a highly effective sense of dread. Here, however, the chain of events don’t support what’s on the way, so there’s this constant reminder that something isn’t quite right and then the reaction, or lack thereof, to the big twist proves it.

Lee creates a winning visual flare and Brolin clearly gives the role everything he’s got, but when you’ve got a film so heavily reliant on layers and wow-worthy plot points, even the most gorgeous shot selection and moving performance can’t trump a tonally unsound, lame narrative. An “Oldboy” reboot had a chance, the incarceration portion of the new film proves it, but without justifying the captivity in a fresh, exhilarating and shocking manner, you deflate the entire concept and also leave the viewer without the best takeaways from the original film – a pit in your stomach and a dizzying obsession with the details and horror of the scenario. 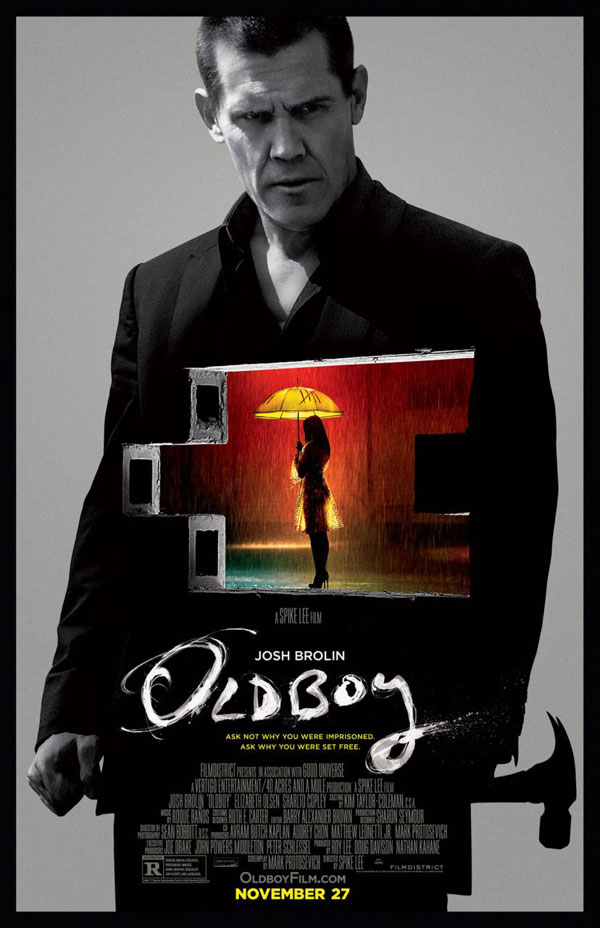 Cancel reply
Exclusive: Miranda Otto Talks Reaching for the Moon
Interview with the Cast of Delivery Man
To Top