Title: Out of the Furnace

A revenge mission doesn’t play well when you don’t care about who’s avenging what and why.

Christian Bale and Casey Affleck lead as the Baze brothers. Bale’s Russell is the older of the two and does his best to sustain a standup lifestyle, dedicated to his job at the local steel mill, his girlfriend Lena (Zoe Saldana), and his family. Affleck’s Rodney, on the other hand, opts to enlist in the army in hopes of finding something to live for outside of Braddock, Pennsylvania. However, after four tours in Iraq and only mental and physical scars to show for it, Rodney winds up back home competing as a bare-knuckle boxer to payoff his debts. When Rodney doesn’t return from a fight in Harlan DeGroat’s (Woody Harrelson) territory, Russell takes it upon himself to head up into the notorious Ramapo Mountains and bring his brother home.

Rather than kick things off by strolling through everyday life in Braddock, “Out of the Furnace” runs with a bleaker introduction, showing off the wrath of its antagonist. The choice to screen “Midnight Meat Train” is a little distracting, but the drive-in movie location is a novel and dynamic setting, that adds an extra layer to Harlan’s tantrum via bystanders’ reactions. Harlan’s behavior is vicious to the point of being disconcerting, but it does function as a highly effective opening hook.

Trouble is, the moment the film switches gears and relocates to Braddock, the pace slows to an excruciating crawl. The Rust Belt makes for a striking backdrop, but beyond that, there’s nothing particularly noteworthy about the town and that’s largely due to the fact that the main characters don’t do anything to give the setting or the narrative much life.

Sure, Russell seems like a well-intentioned guy, but that doesn’t make him interesting, relatable or admirable. There’s a very affectionate scene of Russell cuddling up with Lena, one during which Russell tries to stop Rodney from losing the little money he has and then another where the brothers visit their ailing father, but it’s all superficial. Bale does manage to lose himself in the role, but Cooper and Brad Ingelsby’s script doesn’t give him the chance to do anything while in that headspace. In all of “Out of the Furnace” we never get to experience Russell making a decision; it always feels as though he’s just going through the motions.

Rodney’s got the same problem. Right off the bat, Cooper defines him as a hotheaded kid who doesn’t look before he leaps. It’s mentioned that war changes him, but minus a little extra scruff on his face and/or a new haircut, you don’t feel it and that marks a devastating flaw of the core of the plot. Without believing Rodney’s motivation, it’s impossible to understand why he ignores John Petty’s (Willem Dafoe) severe warnings and goes to fight in Harlan’s ring at all. And from there, the logic issues switches back over to Russell. First off, Rodney somewhat deserves what he gets and secondly, there’s no vibrancy to Russell’s efforts to get him back. It’s exactly what you see in the trailer; Rodney’s disappearance enrages Russell and he stalks off to take out Harlan. How are we supposed to root for that?

“Out of the Furnace” is also without a single viable secondary character. It seems as though Saldana’s character’s intended purpose is to earn Russell some sympathy, but all it winds up doing is turning him into a creepy stalker. Thanks to the fact that Forest Whitaker looks more like Saldana’s father, his character’s relationship with Lena doesn’t even give him a chance to turn Chief Wesley Barnes into an effective player. On top of that awkward and distracting 17-year age difference, Whitaker also uses some wannabe-gritty tough guy voice that makes it feel like a performance and also makes Barnes tough to understand – but not as tough to understand as Harrelson and Bale who lose every other word in their respective regional drawls.

But even then, Harrelson gets away with it because Harlan is the only character that’s interesting to watch. He’s a one-dimensional villain, bad through and through, but he’s such an outrageous and vicious breed of bad that he’s tough to track and that’s one of the only elements that gives “Out of the Furnace” the slightest degree of suspense.

Despite stunning visuals, a satisfying score, and three all-in lead performances, “Out of the Furnace” is still bleak, boring and lifeless. The story’s got no layers, the protagonists aren’t engaging, there are very few interesting or exciting elements in the 116-minute stretch and the grand finale isn’t satisfying in the least. You walk out totally empty. 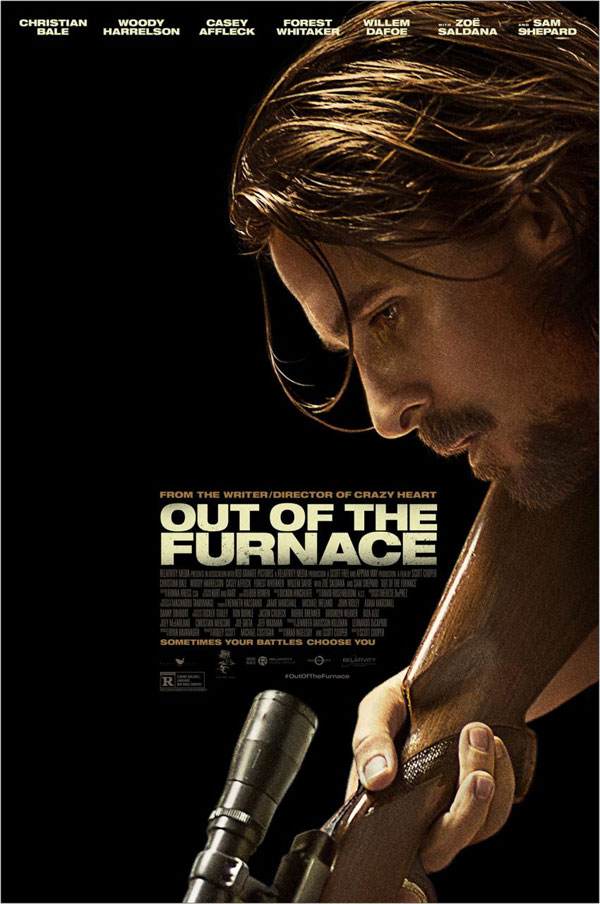