As a musician, songwriter and producer, T Bone Burnett has left his mark on the recording industry in indelible fashion. Yet over the past decade in particular, he’s also burnished his reputation and widened his circle of admirers through much work in film — continuing a collaborative relationship over several movies with Joel and Ethan Coen, serving as the music producer on “Walk the Line” and “Across the Universe,” and winning an Academy Award as part of his work as a producer, songwriter and composer on Scott Cooper’s “Crazy Heart.” His latest big screen endeavor is one of his most challenging. For the Coen brothers’ “Inside Llewyn Davis,” set against the backdrop of the Greenwich Village folk music scene of the 1960s, Burnett worked with the filmmakers and star Oscar Isaac in capturing the live performances of a talented but seemingly luckless folk singer whose Sisyphusian professional struggles and wrecked personal life combine to elicit a toxic mixture of quiet rage and resignation. For ShockYa, Brent Simon recently had a chance to speak to Burnett at the film’s Los Angeles press day — about the difficulty of capturing the movie’s music live, how he typically works with the Coens, and how (and why) he keeps much of modern-day popular culture at arm’s length. The conversation is excerpted below:

Question: You’ve worked with the Coens a number of times, but how did this particular collaboration come about?

T Bone Burnett: They called, and they always have a very clear, very simple view (of what kind of film they want to make). What they said with this one was, “We want to do a movie about the Greenwich Village folk music scene in 1961, just before (Bob) Dylan got there. We want to do it with real songs and made-up people, and we want to do it with all live performances.” And that was it, that’s their foundation for the whole movie, that’s their pitch. They didn’t go in and give me the history of the Civil War or anything. I gave them that later. (laughs)

Question: What is your relationship with this particular era in music?

TBB: Well, it probably was to me much like the “O Brother (Art Thou)” era of music was to kids in their 20s and late teens today, because it was about the same time — I was hearing the music but it wasn’t the soundtrack of my life or anything like that. At that time, this music would get on the radio because there was a scene developing. There was no scene and then some troubadours went around and blazed some paths and invented a scene that eventually became Elvis Presley on one end of it and Bob Dylan on the other. There was Woody Guthrie and other people, and Bob Dylan came through that line. Elvis was in another line that didn’t have access to Woody Guthrie somehow. …But it’s all people with untrained voices, and music that grows right out of the ground, reinvented for hundreds of years. For centuries and centuries, music was used to teach everything — mathematics, language, history, the news. Everything traveled by song. It was used to teach ethics and create conscience, probably more than anything. Probably the deepest use of music and art is to create conscience. {suddenly, the hotel room lights flicker} Whoa, did you see that? (laughs) I have to be careful, saying stuff like that.

Question: Do you have as huge a breadth of knowledge, music-wise, as it seems?

TBB: No, I don’t. But I get to hear the good stuff. I don’t hear any of the popular stuff unless it’s good, because I pay no attention to popular culture at all. I don’t have time, because there’s too much of it that has to do with people of no consequence whatsoever — stuff that they run in front of you just to try to grab your attention. Like, why would you ever care what somebody …. well, that stuff when you see “The Insider” or whatever. I don’t pay attention to that. I live in my own little world, I have to say.

Question: What earns your attention, then, because so much of the music of the 1960s was able to be dismissed in the same way, as disposable?

TBB: That’s true, but I’m not dismissing it. I’m saying a lot of it comes through that is good. There was an incredible amount of junk music — of junk everything, you know, junk culture — from that time. Marshall McLuhan said that a medium surrounds a previous medium and turns that medium into an art form. So film was once a peep-show culture, you know? And then television surrounded it and turned it into an art form, so that by the 1970s you had film as a full-blown art form with auteurs, and even in the ’60s, right? And now the Internet has surrounded television and turned it into an art form, where you have “The Sopranos” and “The Wire” and “Breaking Bad.” So all of these things rise up out of it. But I see “Storage Wars: Baltimore” or something, and there’s a lot more of that (type of TV) than “Breaking Bad.” I live in a community of smart, brilliant people, and they tell me [what] is worth checking out.

Question: One of the songs in “Inside Llewyn Davis,” “Please Mr. Kennedy,” reflects a certain junk culture mindset or sensibility, but then you have a pop star as big as they come in Justin Timberlake performing it. What was that process like?

TBB: I love Justin Timberlake and think that he’s just about our best bet to be somebody like Bing Crosby — someone to go all through his life and do great work. He’s going to be more in favor at certain times and less in favor at others, but you can’t take away from him how good he is — he’s just flat-out good. And he’s that other thing — he’s generous, he will come in and doesn’t have to be a superstar. He’s just from Memphis, doesn’t mind making fun of himself. So it’s all about collaboration — the hallmark of a (true) artist is generosity, so when you’re in a collaborative medium like this, to the degree everyone puts everything on the table, that’s how good the thing is. As soon as someone comes in and wants to grab this or that part, then everything starts falling apart. So when we’re in the studio, we don’t have parts for piano or guitar or drums that say Billy or Johnny or anything — we always just label it the guitar part, because it’s ours. You can’t get attached to a part you came up with because what if someone comes up with a better part? You always have to be willing to know when the other guy is right. And the long answer is that Justin came in like that, and put everything on the table.

Question: How did you go about choosing songs (for Oscar Isaac’s title character), where [you’re trying to] strike the right balance of music that evidences his talent but also maybe shows why he’s not achieving success?

TBB: That was the tightrope walk, and I have to say that only people with the incredible skill and luck of the Coens could pull it off. I never dreamed we’d do something like this. I saw the movie once, and it wasn’t a great-looking movie because it was done with such a low-budget and I saw it on a big screen up close — it was a tough experience, but the music completely wiped everything away, because it was real, it was live, it was two people that were really good playing and singing a song emotionally, with no auto-tuning, no lip-synching or tricks. They were just doing it, for everything they had. Since then, I’ve always held that as the standard. That and “Treme” I think is the standard for a television show — the way they handled music in that was amazing. But I never thought of doing that myself because, first of all I never thought anyone would want to do that, because the stakes are usually too high. When you’re doing it once you’re doing it for low bucks, so you can afford to screw it up. And you’re also dealing with people who are professional musicians. So here the tightrope walk was that we had to find an actor who had to play a difficult part — a part that’s not going to make you love him, but you still have to stay with him the whole movie — and it’s about a musician, so you have to whole performances of songs so you really got into his life, and learn the most about the character, I think. And then we have to do all that live. I thought it probably couldn’t happen — that we’d have to find someone and start lip-synching and do it the normal way, which would have been a completely different movie and taken all the fun out of it, really. … Risk is what separates the artist from the artisan, so here we are. This is like walking a tightrope without a net but also without a rope — it’s like levitating across the (divide). But Oscar did it, and the Coens did it. And I was sitting there with a stopwatch, making sure he wasn’t speeding up or slowing down. I had the most pedestrian job. (laughs) 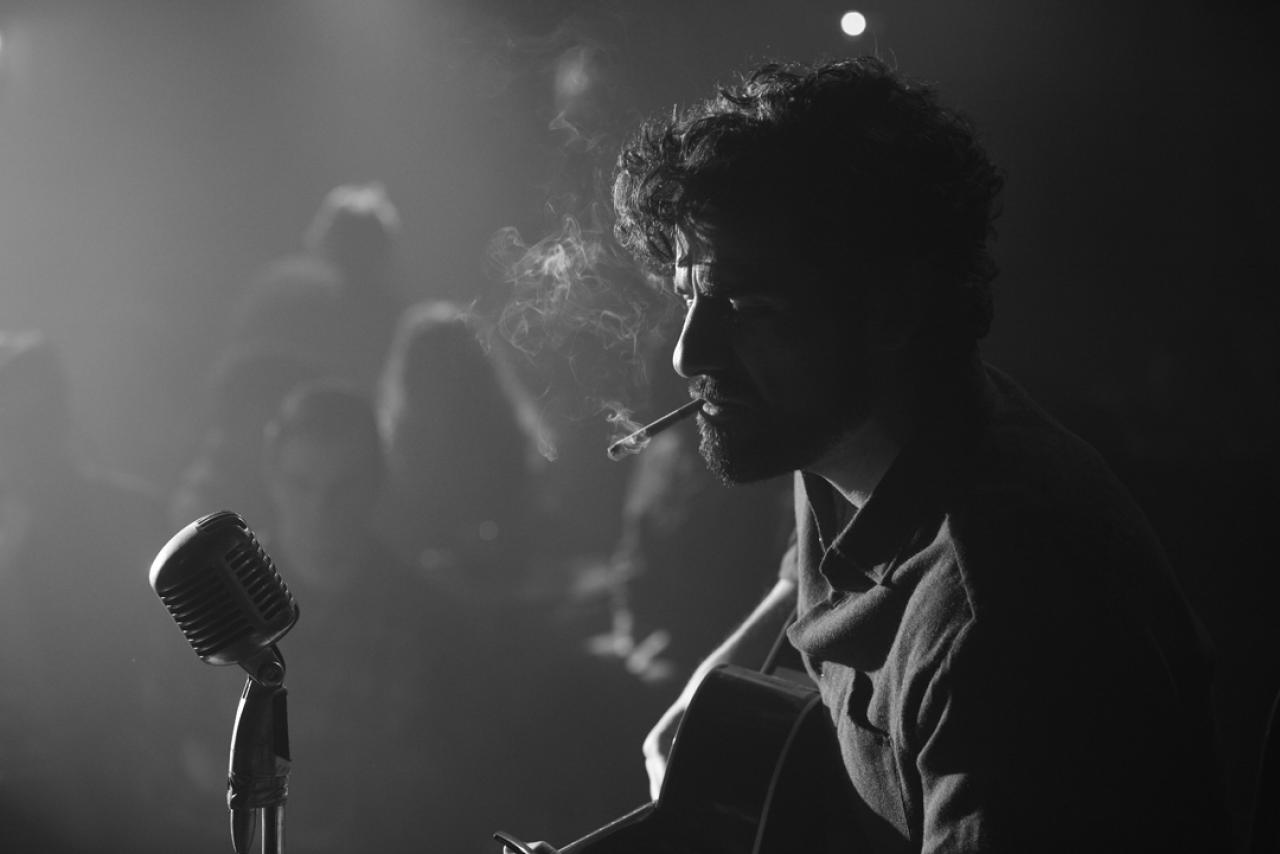