Actors, even quite successful working ones with deep filmographies littered with big-budget fare, can labor in relative obscurity for years, before just the right role gives them the chance to “pop.” Such is the case with Oscar Isaac’s superb, anchoring performance as the title character in Joel and Ethan Coen’s sardonically funny “Inside Llewyn Davis,” about a week in the life of a struggling folk singer in 1960s New York City, and the slow fade of his despair into outright resignation. For ShockYa, Brent Simon recently had a chance to talk to Oscar Isaac at the film’s Los Angeles press day, about his breakout role, preparing for the movie’s live musical sequences and working with the Coens. The conversation is excerpted below:

Question: Llewyn retains a certain standoffish quality throughout — he’s not always the most sympathetic figure. How did you set about preparing for the role?

Oscar Isaac: It was an interesting challenge, because the writing is such that you have the clue that people in his circle are clearly not too happy with Llewyn. He’s someone who’s disconnected and isolated from others. He’s a man unto himself, an island unto himself, and early on, when I started, I thought that I wanted to still convey warmth but not use any of the traditional means of doing that — by charming someone or ingratiating yourself to someone or even smiling, any of those kinds of things that most people do. Like, if you tell a joke and then laugh to let others know that you were joking — he doesn’t do any of those things. But at the same time it wasn’t about being cool and detached, because his temperature still runs very hot. I thought about the comedy of resilience, and why it is that we laugh at all these hardships that (he’s suffering). Is it because we’re sadistic, is it because it’s relief that it’s not us or is it something else? And I thought of a performer who (captured) that a lot: Buster Keaton. All these near-death experiences are constantly happening to him and yet he presses on, and his face is always in this kind of melancholic impasse, and what happens when you see that is a great suggestion of a rich inner life that’s happening. For me that was really important, because the only time he does connect with people, and really open up, is when he plays his songs. That’s the only time when he really shows a window into where he’s at. Otherwise, it’s just all happening inside his head.

Question: What was your collaboration like with T Bone Burnett (the film’s executive music producer)?

OI: He completely changed the way that not only I listen to music, but the way that I play music. The first thing we did was go out to Norm’s Rare Guitars in Tarzana (California), and we found Llewyn’s guitar, which is this little L-1 from 1924, which is what rock ‘n’ roll was basically invented on — Robert Johnson’s “At the Crossroads” guitar. (laughs) And we joked that I made a very special deal with T Bone. Then he took me back to his home studio, and the first thing that he did was put on Tom Waits’ new record for an hour, and he was like the musical Mr. Miyagi — an invisible hand guiding me but never telling me what to sound like, just stripping away any artifice.

Question: What was your musical experience prior to working on this movie, and how did it change the way you played music?

OI: I’ve been playing guitar for a very long time, but I never played this particular style of picking, called travis picking, which is very much like stride piano or ragtime, where the bass is constantly going, with the thumb, and the right hand is doing all kinds of crazy stuff, in syncopated melodies. That took a real re-wiring of the brain to figure out. But I just obsessed over it and figured it out.

Question: Did you have a lot of interest in folk music prior to the movie?

OI: Well, I grew up listening to (Bob) Dylan, though this was obviously the time just before him. I’d heard some Woody Guthrie and Pete Seeger, but this particular time I wasn’t aware of. As soon as I dove into it, I’ve become obsessed with it ever since. For instance, Karen Dalton I wasn’t aware of, and now I’m just such a huge fan of her music, even though she has such a tragic story. Dave Van Ronk’s repertoire was really my lifeline for this movie. I just clung to that very early on. It wasn’t dictated that I was supposed to sound like him or anything — obviously I’m not playing Dave Van Ronk (even though the Coens took inspiration from him for the character), but his music just spoke to me in a very particular way and so I learned a large amount of his music.

Question: What do you think is the main appeal of the Coen brothers?

OI: They’re my favorite filmmakers and they have been since I first saw “Raising Arizona.” I remember seeing that movie as a little kid and it blew my mind — it was so funny, but also made me feel so sad and weird. They do things, I believe — one, they do theater about the common man. In “Barton Fink” I think John Turturro’s character says, “I want to make theater of the common man,” and that’s what they’ve always done. And not only that, but it’s the common man dangling in existence — it’s an investigation of existence, and existence is both desperate and completely absurd, and dark and joyful and painful as well. Those things are constantly happening (in movies by the Coens), and sometimes right on top of each other. It’s very much like (Anton) Chekhov, I think, which I hadn’t read a lot until I studied him in drama school. Coen brothers’ movies may not always be what life looks like, but they’re definitely what life feels like.

Question: What sort of work went into figuring out Llewyn’s voice, which is different than yours?

OI: That was challenging, because what I decided to do for the audition, where I had to sing “Hang Me,” was to sing Dave Van Ronk’s arrangement, but just sing it like me. From there, I assumed there was going to be a panel of experts headed up by T Bone getting me to sound just how they needed me to sound. But that never happened. In fact, it was a much slower, organic process. And as I investigated the character more and let his circumstances influence and inform who he is, there was a mixing of what my voice is and Llewyn’s voice, and the pressure and compression that he’s feeling. It was kind of that brackish water that I decided to live in, but it was tricky because it’s not like a musical where the song is an expression of the character and plot and what’s happening. The songs have zero to do with the plot, really — they’re more of a revelation and window in. And the Coens never shoot with long lenses, the cameras are always [in very] close, so it has to be internal. That was a tricky thing.

Question: Llewyn alienates a lot of people around him, but as a performer you can’t judge him. How do you think he sees the way that people act around him — does he understand when and why they give him static and pushback?

OI: I think he thinks they’re assholes. (laughs) He’s just trying to survive, and do his thing while also trying to do the right thing too. He decides… to walk around with this (runaway) cat because he feels it’s doing right by these people who let him crash on their couch — even though they kind of exploit him every now and then, and can be condescending. It’s a non-win situation. But he’s never going to try to ingratiate himself just so people like him more.

Question: You’re from Guatemala, but have had the chance to play roles of many different heritage, haven’t you?

OI: Yes. I’m happy to be from Guatemala, but as an actor you want that to be invisible, because the most fun thing is to play vastly different people — or at least for me, to play someone in completely different circumstances. So the fact that I’ve been able to (play a lot of different ethnicities), from playing Llewyn, who’s Welsh, to King John, that’s been really exciting and I hope that I can keep doing that kind of thing.

Question: The film juggles different tonalities — was it difficult to strike a balance in those?

OI: The rhythm of a film is obviously very important, but a lot of that is written in there if you just pay attention. But truthfully, whenever I felt in the absolute most pain, the most horrible or darkest, is when Joel and Ethan would laugh the loudest, so that was my barometer.

Question: What was your biggest takeaway from the movie, or something you learned?

OI: Not to look for compliments from the Coens, because they don’t give many. So that first week I was like, “They’re not saying if it’s good or not — I hope it’s going okay.” But after that first week you don’t look for it anymore, and then it’s a big relief because it’s not about that, it’s not about a constant judgment — it’s just about the work and figuring this thing out. And it’s a really nice way to work, actually. There’s a reason why actors are dying to work with the Coens, and it’s because they just set the stage for you to do your best work. 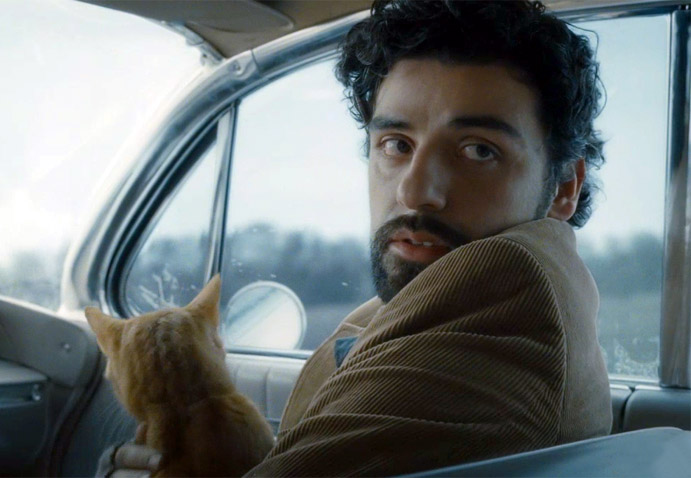