THE WOLF OF WALL STREET

Does money buy happiness? Philosophers and ordinary people have debated this question since the ancient Greeks. The latest from the folks who write self-help books is that when you’re poor, money counts. You can added increments of happiness up to $75,000 annually. What you earn after that brings a few additional happiness credits but to an ever-decreasing extent. In fact, once you pass, maybe, the million mark, you actually become less happy, which could be because you’ve seen it and done it all. When nothing’s new under the sun, what’s the point? Martin Scorsese deals with that last point in “The Wolf of Wall Street,” based on the title character’s own book confessing all.

As directed by Martin Scorsese, “The Wolf of Wall Street” is why American movies are loved all over the world, prime viewing by even the last leader of North Korea, Kim Jong-Il. Whether this latest Scorsese will be a hit with the critics, it’s sure to having soaring box office figures by the sheer chutzpah of the project, the joyful lack of discipline, a tour de force performance from Leonardo Di Caprio, and, oops, I almost forgot: the naked women. What’s more the film enjoys Rodrigo Prieto’s splendid wide-screen photography, some sharp editing by Thelma Schoonmaker that takes us to back to the early work days of the book’s author, and Bob Shaw’s crackerjack production values including at least one brokerage house the size of a football field.

The subject of the movie is Jordan Belfort, who comes up from poverty with the drive and ambition to make as much money as he can, even though ironically he literally throws some Benjamins around adding a $40,000 watch which he chuck to his cheering audience of brokers. The self-book authors say “Do what you like and the money will come,” and by gum, they’re right on target.

Belfort (Leonardo Di Caprio), who was banned form the securities business for life and was sentenced to three years at a country club prison after taking a plea, began with a small outfit selling penny stocks, the brokers earning the unheard commission of fifty percent. “Who buys these junk offerings?” he wants to know, getting the obvious answer from a colleague, “schmucks.” He used the commissions earned from an obscure company into acquiring large amounts of stock, minimal disclosure, pumping up the price and then selling. Some of the profits are laundered into legitimate businesses (like the dry cleaning firms owned by Irving Rosenfeld in David O. Russell’s movie “American Hustle”), while others are cleansed through banks in Geneva, one of which is managed by a corrupt Swiss manager Jean-Jacques Saurel (Jean Dujardin).

You don’t have to be excited about Economics or finance to love this movie, but it helps to have a broad mind (no pun intended) which will allow you to revel in the scantily clad women who compete in pleasuring men with boatloads of drugs like Quaaludes that are taken by Belfort and his second-in-command, Donnie Azoff (Jonah Hill).

Sex, drugs, and rock ‘n’ roll are thematic and put across by DiCaprio, probably the best actor for the job of being Belfort. When he bellows into a microphone, his fellow brokers cheer wildly, and they’re doing so not just to suck up to the boss but because they’re being well treated indeed by the maestro of money. Never mind that his stock manipulations involve investor losses of two hundred million dollars, and that money launderings brings him and his company, Stratton Oakmont, to the attention of FBI agent Patrick Denham (Kyle Chandler) on Belfort’s trail like Javert chasing Jean Valjean.

A good deal of film is taken up with some of the most lavish and sexually uninhibited parties, Belfort admitting that without the drugs, the booze and the sex, his life would not be worth living. If you thought the parties in Bob Gosse’s 2003 movie “I Hope They Serve Beer in Hell” and the stock scams in Ben Younger’s 2000 pic “Boiler Room” were far out, be prepared to take both activities up several notches. Marvel at Belfort’s many monologues delivered at fever pitch as though the speaker is on speed, at a fascinating pep talk in a lavish restaurant by Belfort’s first mentor Mark Hanna (Matthew McConaughey), and at terrific supporting performances from Jonah Hill as Donnie and Margot Robbie as Belfort’s voluptuous wife Naomi.

This is the year’s best movie. 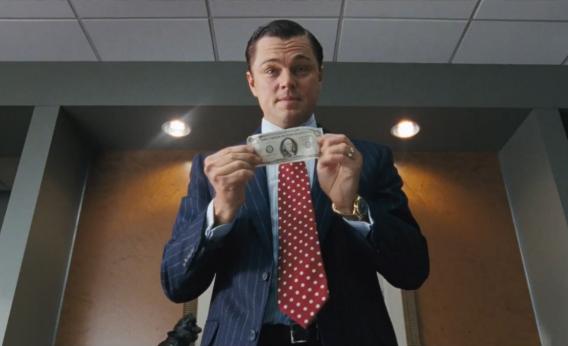