Dec 26, 2013 IN SICKNESS AND IN HEALTH, ONE VILLAGE ENTERTAINMENT, ROGER MELVIN, TO LOVE AND TO CHERISH

Director Roger Melvin’s family movies, ‘In Sickness and In Health’ and ‘To Love and To Cherish,’ are set to be released as a double feature on DVD. One Village Entertainment is set to release the two television family films, which both debuted last year, on home entertainment on January 7, 2014. The double feature, which stars Chico Benymon, Denise Boutte, Golden Brooks, Jennifer Freeman, Mel Jackson and Tommy Ford, will be available for $14.98.

One Village Entertainment has released the following synopses for Melvin’s two films:

‘In Sickness and In Health’ tells the story of the young and gorgeous Faith who seems to have it all, including a fiancé who adores her. But with just days before her wedding, she’s hiding a serious secret about her health, one she’s terrified to share with her perfect guy, Norman. Will the truth keep her man by her side, or will it send him running? Can their love stay strong when tested by one of marriage’s most challenging vows?

‘To Love and To Cherish’ narrates the story of Aliyah would like nothing better than some private time “to love and to cherish” her sexy husband, Jay. But somebody is always interrupting…kids, ex-spouses, relatives. Pulled from every direction, Aliyah doesn’t think she can take much more and is about to reach her breaking point. How’s a modern woman supposed to keep her marriage alive in all the chaos? 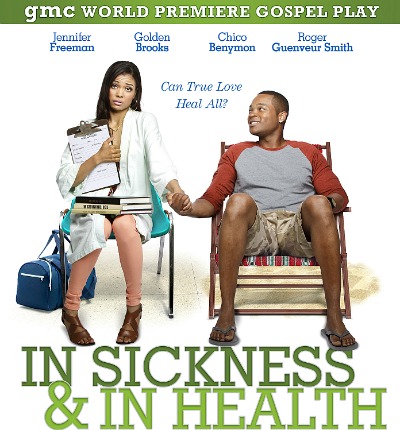