I wouldn’t mind living in Spike Jonez’s version of the future, but for now I’m happy to just keep watching “Her” over and over again.

“Her” takes place in a future version of Los Angeles and hones in on Joaquin Phoenix’s Theodore Twombly, a soon-to-be divorced man who writes other peoples’ love letters for a living. One day, Theodore opts to purchase the hottest new piece of technology on the market, OS 1, the first artificially intelligent operating system. Soon thereafter, he creates Samantha (Scarlett Johansson), a digital secretary of sorts who’ll clean out his inbox, organize his writing and also be his friend.

If we’re heading towards Jonze’s version of the future, we might be better off. There are no hulking robots, deep space transports or overabundance of ultramodern technology, but rather mildly modified elements of the present that have clearly been changed to facilitate a more serene lifestyle. Computers are voice activated, clothing trends are practical, the streets are clean and not a single person raises his or her voice. “Her” features some heated discussions, but they’re genuine discussions, not thoughtless outbursts.

But that’s not to say “Her” isn’t loaded with emotion. In fact, it’s more moving than most because the characters’ wants and needs aren’t clouded by melodramatic behavior. The issues are simply laid out as they arise and that gives the viewer more time to assess and understand rather than be jerked around by meaningless tantrum-driven fluff.

It’s easy (and accurate) to say that “Her” is about a guy who falls in love with a computer, but Phoenix and Johansson make it so much more than that. Within minutes, Phoenix establishes Theodore as someone with some odd quirks, but also as a thoughtful, caring man who just wants to be happy. He’s got vices, but also the best intentions, so it’s easy to get behind his pursuit of love and companionship, and that leaves the viewer wide open to accept Samantha.

It’s tough to comprehend an actress delivering such an outstanding voice performance that she could rival live action work at the Academy Awards because it’s never been done before. However, now it has and Johansson deserves acknowledgement for the achievement. Jonez’s impeccable narrative and Phoenix’s heartfelt and honest representation of Theodore do facilitate the success of Samantha, but then Johansson brings it to another level. Had “Her” been a marketing tool for a real-life intuitive operating system, there’s no doubt that Samantha’s appeal would make the product a sellout.

It’s one thing to see a strong voice performance match up with animation, but letting voice work live and breathe on its own offers an entirely different sensation. Just like for Theodore, part of Samantha is left to the imagination for the viewer. At the start especially, we all hear the same voice, but there’s this malleability that lets you envision her however best suits you. But, the more she learns, the more she becomes her own person and that conjures quite the conflict. On one hand, you want her to become as close to a living, breathing person as possible because that’s what she wants, but then again, the closer she comes to achieving that, the closer she comes to outgrowing you. “Her” may begin with the peculiarity of a human being dating a computer, but by the end, it’s much more about two equal entities challenged to work out their differences. Those differences do stem from the fact that Theodore is tangible and Samantha is digital, but on an emotional level, it’s about two beings that love each other.

Every performance in “Her” consists of quality work, but the supporting actress that deserves extra recognition is Amy Adams. She steps in as his Theodore’s friend, Amy, and the character is absolutely vital to that ease of adjusting to this world. Even though Amy doesn’t get a fraction of the amount of screen time as Theodore, she gets quite the arc of her own and that arc is perfectly parallel to the viewer’s take on Theodore and Samantha’s relationship. Amy encourages an open mind while also keeping the scenario grounded.

Jonez and cinematographer Hoyte Van Hoytema also deserve a great deal of credit for essentially creating a brand new cinematic language. They didn’t have the luxury of being able to sell a one-on-one relationship using two shots and singles; they had to turn that tiny digital wallet Theodore clutches so dearly into a palpable being, and they do. Save for the few moments when we view this world from Samantha’s perspective, almost every single visual is of Theodore and often of Theodore alone yet Jonez and Hoytema manage to keep every single shot telling, interesting and staggeringly natural.

“Her” is an incredible achievement in every respect. It’s astounding that someone can come up with such an innovative, appealing idea and then even more so that two actors can bring it to life in a way that makes you believe to such an extent. Even though it’s a relationship between a man and an intangible technology, Theodore and Samantha’s connection will make you feel so much more than the large majority of traditional on-screen relationships. 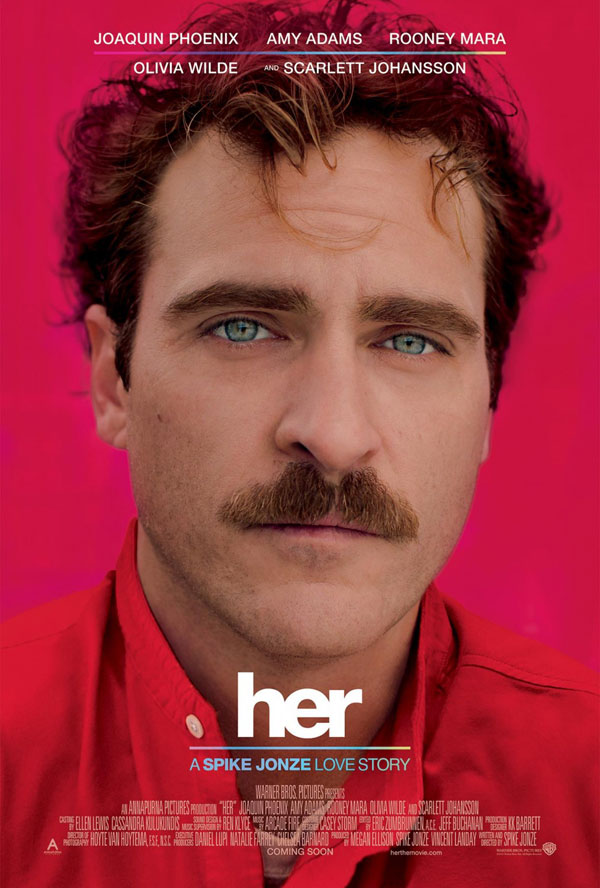