In “Burying the Ex,” Evelyn (Ashley Greene) is not quite ready to let go of her ex-boyfriend Max (Anton Yelchin), and accept his new relationship. This is frustrating for Max. Oh, and matters are additionally complicated by the fact that she’s a newly minted zombie — which of course makes her a formidable romantic foil for Max’s new girlfriend Olivia (Alexandra Daddario). For ShockYa, Brent Simon recently had a chance to visit the Los Angeles set of director Joe Dante’s film, as it was winding down principal photography just before Christmas. There, Simon had a chance to observe shooting and chat with the cast and crew. His conversation with screenwriter Alan Trezza is excerpted below:

ShockYa: Zombies are a hot property now, but of course I realize everything in Hollywood travels its own winding path to production, and so projects that seem market-dictated have often been in the works for years. This was based on a short film you did a number of years ago, but have you always been drawn to the zombies or the horror genre?

Alan Trezza: I did love horror films growing up. …But I always found that the most effective zombie films were the ones that used the zombies as a metaphor for something greater or bigger rather than just a menacing, lumbering threat. If you look at “Night of the Living Dead,” it’s really not about a zombie threat, it’s about the people who have to shack up — they’re from all these different backgrounds and races, and it’s about them trying to overcome these differences to survive this night. With “Dawn of the Dead,” which takes place mainly in a shopping mall, it’s mainly about consumerism — mindless hoards of people storming this mall, consuming everything in sight. And then “28 Days Later” did it with disease, and the fear of a disease spreading through blood and saliva, and a lot of people say about was about AIDS. And I just sort of realized that no one had ever used the zombie as a metaphor for a failed relationship, and what an apt one that was, because we all know what it’s like to be in a relationship that you want to get out of but just can’t — you can’t move on, that person always seems to be on Facebook or around the corner. It just all sort of clicked. The genesis was five years ago, when I did a short film (with John Francis Daley and Danielle Harris) that was 15 minutes and played at a few festivals. There was just too much there to confine it to a short, and I felt compelled to expand it to a feature film, which I had a lot of fun doing.

ShockYa: The film is set present day, right? So five years ago, when you were working on the short, the Internet and social media were certainly universal elements, but did you want to interweave all those technological enablers of the inability to escape a significant other’s shadow — Facebook and Twitter and the like — or is the movie more set apart from that type of stuff?

AT: It’s set apart only in that the threat is constantly looming, she’s just always there in person. She’s at the apartment, or just outside — he simply can’t escape her. It’s even a worse thing than that, and even though he does meet the girl of his dreams he has to juggle this scenario of trying to get rid of his ex even though she can’t die. That’s the journey he has to take, which reflects the journey everyone has to take in order to leave a relationship that might be toxic, and start anew.

ShockYa: Does Evelyn reach any sort of place of acceptance regarding her relationship with Max ending? And how does she accept or react to becoming a zombie?

AT: Well, Evelyn — hopefully like all great antagonists — is the protagonist of her own story. Evelyn views her resurrection as a gift — “we’ve been given a second chance, our love is greater than death so we have to seize this.” That’s her whole thing, and there’s really no way to argue (with her and) with that notion. So Evelyn has her own agenda and goal, and it’s something that I think is justifiable with some sort of strange, supernatural reasoning.

ShockYa: Does she represent a singular zombie, or are there many other zombies out there within the movie’s world?

AT: I thought since this is really a relationship movie and not a plague film like “World War Z” it was important to really narrow it down to one person. It’s a relationship film, a love story, a tragedy in some ways, but it’s not a big global epidemic.

ShockYa: Or even something like “Warm Bodies,” which I’m assuming you probably saw, which is a relationship story but also framed within a larger epidemic.

AT: Yeah, and our zombie, unlike the zombies in “Warm Bodies,” talks — she talks a whole lot. (laughs) Almost too much for Max to bear. Evelyn can talk, she can run, she’s extremely powerful — everything that she was, good or bad, has been magnified exponentially.

ShockYa: When Zack Snyder’s “Dawn of the Dead” remake came out, there was pushback or controversy regarding zombies that could run, and as you know, different films and projects have taken different bits of zombie lore here and there. How did you decide what elements of zombiedom to use, if that makes sense?

AT: The fact was that Evelyn had to be bigger than she was. When we first meet her, Evelyn is very fit, she does yoga all the time. She’s very driven. She has things that she feels very passionate about — one of the main ones being her boyfriend. So the only way to make that something greater was to expand upon that, not to lessen it or decrease it — not to make her slower or mindless, but rather to make her more formidable. So in her yoga, as you’ll see, now she can hit all these poses that are completely grotesque and disgusting. She is very verbal, and loves to chat Max’s ear off. All the things that she felt passionate about now she’s completely over the moon and overzealous about. It’s that thing about where you break up with somebody you tend to re-write the history, and have certain things get magnified in your brain. That was another metaphor that I wanted to weave in. That also played a [part] into deciding what abilities she had as a zombie.

ShockYa: What’s it been like working with Joe (Dante)? He loves to have writers on set, so I imagine that’s been gratifying.

AT: The short film was something I wrote and directed, and then when I expanded it for a moment I thought I would direct the feature (version) as well. But when day one of shooting occurred I could not have been happier that Joe was directing and I’d taken a backseat to producing and sticking with the script, because it’s been the most incredible film school a person could ever ask for. He is so focused, so sharp, so creative, and can juggle so many things — the main thing being our limited budget and limited schedule. He’s making what is a low-budget film seem like what is a very, very big-budget studio film. It’s something I don’t know if I could have ever done, given my limited experience, but watching Joe — who started off with Roger Corman, doing films on micro budgets and finding a way to stretch the dollar and make the schedule and try to make it look 100 times better than the money given to produce it — has been an incredible thing to behold. When I completed (the feature script) five years ago and it made the rounds, this was before zombies was a solidified genre that were considered commercial. So a lot of people really loved the writing, and I got some great meetings out of it, but ultimately studios and the mini-majors agreed that zombies were simply not a commercial enough genre to put some money into, no matter how low the budget. And little by little, the more zombie films and TV shows that came about, people would sort of say, “Oh yeah, I remember ‘Burying the Ex,’ that was kind of a different sort of zombie movie.” But it wasn’t until “World War Z” came out, which is now Brad Pitt’s highest-grossing film of his career, that the phone started to ring off the hook and the money finally came through.

ShockYa: So it was literally a week or two after that?

AT: It was that fast, yeah. (laughs) But what’s good is that the heart remained, and that’s one of the biggest elements of this film — there’s a lot of heart and emotion to it. The actors have to go through moments of intense heartbreak and heartache to moments of comedy to moments of sheer terror. And they’re doing a phenomenal job. Sometimes they hit all those emotions pitch-perfectly in the span of five hours, and it’s amazing to see. And I think it’ll show that this isn’t a film that isn’t trying to chase a trend, but rather do something new (with zombies). When the script made its round it made its way into the hands of some actors and directors who found it interesting and different and unique and one of those people was Joe Dante. When we sat down, within five minutes I just knew that the project was in great hands because he knew what the theme was, he knew what I was going for — he knew that this really is a movie about two people and a relationship gone wrong, and someone trying to find a way out and not being able to. He spoke more to the characters and theme than the genre elements, and I thought that was the most important thing. And we’ve worked together in an incredible way, honing it and bringing out those themes even more, getting to the essence of the script. It’s been the most amazing collaboration that a first-time-produced screenwriter can ask for. I’m hoping we can work together again as soon as this is edited and distributed.

NOTE: More on “Burying the Ex” will follow in the coming days. For a previously published Q&A with Daddario, meanwhile, click here: http://www.shockya.com/news/2013/12/30/exclusive-alexandra-daddario-talks-burying-the-ex/ 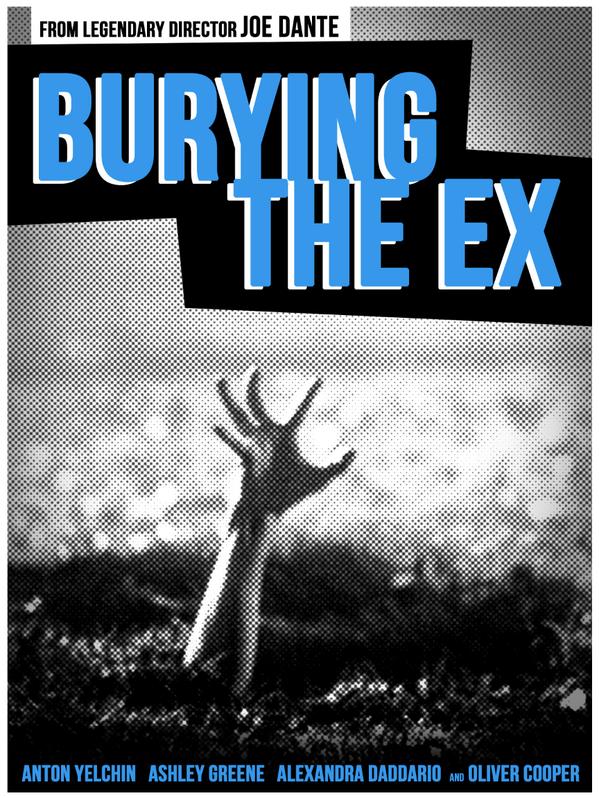