Welcome to your first Movie News Cheat Sheet of 2014! We’re hitting the ground running with loads of promising industry news.

Dwayne Johnson confirmed that he’s going to take on a DC Comics character, we got our first official look at our Guardians of the Galaxy, and there’s a rumor floating around that Boba Fett could get the first “Star Wars” spin-off film. On top of that, we also got a nice laugh at Shia LaBeouf’s expense because as Lena Dunham so eloquently put it, “I’ve always felt, utterly and unchangeably, that only sociopaths hire skywriters.”

Catch the details on all of those stories as well as some must-see trailers and the box office standings in your weekly Movie News Cheat Sheet.

1. “Fast & Furious 7” to Retire Paul Walker’s Character: The final decision is in. As reported by THR, “Fast & Furious 7” will retire Paul Walker’s character, Brian O’Conner. Since Walker’s passing, there’s been talk about killing Brian off in the seventh installment, but director James Wan, writer Chris Morgan and Universal have decided to “tweak the script,” which would allow them to use the material already shot, including Walker’s scenes, but while writing the character out so that the franchise can continue on without him. The changes will require the team to write and shoot additional scenes, but since the film was pushed back to April 10, 2015, time shouldn’t be an issue.

2. Writers Guild & Producers Guild Nominations: Academy Award nominations are less than two weeks away and the Writers and Producers Guild nominations have come to head them off, giving us a sense of what we can expect come announcement day on January 16th. “American Hustle,” “Blue Jasmine,” “Dallas Buyers Club,” “Her,” and “Nebraska” all scored nods for Best Original Screenplay while “August: Osage County,” “Before Midnight,” “Captain Phillips,” “Lone Survivor,” and “The Wolf of Wall Street” filled in the Best Adapted Screenplay slots. Over at the PGA, the following features are up for the Darryl F. Zanuck Award for Outstanding Producer of Theatrical Motion Pictures – “American Hustle,” “Blue Jasmine,” “Captain Phillips,” “Dallas Buyers Club,” “Gravity,” “Her,” “Nebraska,” “Saving Mr. Banks,” “12 Years a Slave,” and “Wolf of Wall Street.” In the animated department, the nominations went to “The Croods,” “Despicable Me 2,” “Epic,” “Frozen,” and “Monsters University.” The PGA will announce its winners on January 19th and the WGA will dole out its awards on February 1st.

3. First “Guardians of the Galaxy” Image: Say hello to the Guardians of the Galaxy. Marvel unveiled the very first look at the gang including Chris Pratt as Star-Lord, Zoe Saldana as Gamora, Dave Bautista as Drax, Rocket Raccoon (voiced by Bradley Cooper) and Groot (voiced by Vin Diesel). On top of that, the studio also shared the official synopsis for the James Gunn-directed film: “… brash adventurer Peter Quill finds himself the object of an unrelenting bounty hunt after stealing a mysterious orb coveted by Ronan, a powerful villain with ambitions that threaten the entire universe. To evade the ever-persistent Ronan, Quill is forced into an uneasy truce with a quartet of disparate misfits … But when Quill discovers the true power of the orb and the menace it poses to the cosmos, he must do his best to rally his ragtag rivals for a last, desperate stand–with the galaxy’s fate in the balance.” “Guardians of the Galaxy” is on its way to an August 1, 2014 release, so we should get our first look at the gang in action soon enough. (via Marvel)

4. Dwayne Johnson Confirms DC Project: Dwayne Johnson is as close to a real-life superhero as you get; isn’t it fitting that he’d play one on the big screen? There’s been talk of Johnson joining the DC line-up for quite some time, but The Rock’s latest tweet is monumentally more definitive than anything he’s mentioned before: “We just had a big meeting w/ Warner Bros CEO re: @DCComics 2014 we will partner up and create the cool bad assery. #RockTalk @ActionTilson.” Clearly something is happening, but now the question is, what? There’s been talk of Johnson joining the “Batman vs. Superman” roster tied to the rumor that Doomsday could pop up in that film, but then Peter Georgiou of ThinkMcFlyThink said he heard it’s for the role of Green Lantern, John Stewart. But of course, nothing is the real deal until it’s confirmed and at the moment, the only thing that is confirmed is that Johnson is collaborating with DC so for now, all we can do is revel in the potential.

5. The Shia LaBeouf Plagiarism Saga Continues: After getting caught plagiarizing, you’d think Shia LaBeouf would want the whole scandal to just go away – but no. Even after publically apologizing for copying and pasting plot points and lines of dialogue from Daniel Clowes’ novella, “Justin M. Damiano,” into his own short film, “HowardCantour.com,” LaBeouf chose to turn it into an even bigger deal by apologizing in the most ostentatious way imaginable. Stealing someone’s work and passing it off as your own is the ultimate no-no, but in LaBeouf’s case in particular, it’s just downright baffling that he, A, didn’t think to credit Clowes for the material and, B, thought he wouldn’t get caught. Of course he was and in an effort to make amends, LaBeouf took to Twitter to apologize, but when folks didn’t buy his sincerity in that medium, he opted to go bigger, bolder and exponentially more ridiculous. LaBeouf tried to make amends via skywriting. Yes, skywriting. Don’t believe me? Check out the image LaBeouf posted on his Twitter feed right here.

6. The Most Pirated Movies of 2013: The title of top grossing movie at the box office is far more desirable, but “The Hobbit: An Unexpected Journey” should be pleased it had enough staying power to make it the most pirated film of 2013. According to Torrent Freak, “An Unexpected Journey” topped the chart with 8.4 million downloads, followed by “Django Unchained” with 8.1 million and then “Fast and Furious 6” with 7.9 million. One thing most of the movies that made the top ten have in common? They made a killing at the box office – minus “Gangster Squad.” Even though that one took just $46 million at the domestic box office and $105.2 million worldwide, it still managed to come in at #7 here with 7.2 million downloads on BitTorrent.

7. Boba Fett Origin Film in the Works?: Even though all eyes are on J.J. Abrams as he creeps closer to the “Star Wars: Episode VII” start date, the plan is to release a new “Star Wars” film each year starting in 2015, so that means plans for the “Episode VII” follow-up will have to come together soon, too. After “Episode VII” while we wait for “Episode VIII,” we’ll get a spin-off movie and then after “Episode VIII” while we wait for “Episode IX,” we’ll get another. There’s been loads of talk about the likelihood of those movies belonging to a young Han Solo and Boba Fett, but until the folks at Disney and Lucasfilm confirm that information, it absolutely isn’t a sure thing. However, the Boba Fett rumor did just take a baby step closer to becoming the real deal because producer-director-editor Jon Schnepp is claiming that that spin-off is a lock. He told AMC Movie Talk, “One of them is Boba Fett. It is. I know. I know for a fact. I will never reveal my source, but it is the one written by Lawrence Kasdan.” Schnepp doesn’t have anything to do with the “Star Wars” movies directly – as far as we know – but it also seems highly unlikely that’d he go as far to say “I know for a fact” if he didn’t, in fact, know for a fact. Either way, considering spin-off film #1 is due in 2016, the official word on its content will likely come soon.

8. Leonardo DiCaprio Defends “The Wolf of Wall Street:” Even though “The Wolf of Wall Street” snagged over $60 million at the domestic box office thus far, has a 75% on Rotten Tomatoes and a number of awards season nods, it’s still taking some serious flak from those claiming the feature glorifies Jordan Belfort’s behavior. While talking to HitFix, Leonardo DiCaprio had this to say about that reaction: “It’s exciting to be a part of a film, in a way, that is kind of bold and is taking a chance like that, and I think that anyone that thinks this is a celebration of Wall Street and this sort of hedonism — yes, the unique thing about Marty [Scorsese] is that he doesn’t judge his characters. And that was something that you don’t quite understand while you’re making the movie, but he allows the freedom of this almost hypnotic, drug-infused, wild ride that these characters go on. And he allows you, as an audience — guilty or not — to enjoy in that ride without judging who these people are.” He continued, “In fact we’re saying that this is something that is in our very culture and it needs to be looked at and it needs to be talked about. Because, to me, this attitude of what these characters represent in this film are ultimately everything that’s wrong with the world we live in.” Whether you’re on board with that assessment or not, DiCaprio could still be on his way to his fourth Academy Award nomination for his work in the film.

9. Trailers: “Veronica Mars,” “Dead Snow: Red vs. Dead,” “Draft Day:” As a non-Marshmallow the first trailer for the “Veronica Mars” movie doesn’t quite do it for me, but fans of the TV series dig it – or so I hear. Considering the film was funded by fans, it’s understandable that promo #1 would be out to prove the film’s worth to them, but hopefully the marketing campaign will offer up a point of access for us newcomers prior to the film’s March 14th release, otherwise I’ve got a lot of TV-watching to do. The Sundance teaser trailer for “Dead Snow: Red vs. Dead,” on the other hand, rocks big time appeal for fans of the original and newcomers alike. In fact, not only will the throwback portions of this piece get returnees pumped, but it could also entice “Dead Snow” newbies to seek out the original in anticipation for round two. The first trailer for the Kevin Costner-starrer “Draft Day” has a “Jerry Maguire”-esque appeal, just without the heart. Clearly Costner’s Sonny is the underdog making risky moves, but it isn’t quite clear why the pressure is on now more so than ever and why we should care. Hopefully that’ll change prior to the film’s April 11th debut because this could be a fun, fresh perspective on the sport.

10. Box Office: Even though “Paranormal Activity: The Marked Ones” was supposed to enjoy a competition-free debut, “Frozen” snuck in there to steal the top spot – in its seventh weekend out nonetheless! “Frozen” actually managed to hold on to over 70% of its holiday profits for a whopping $20.7 million total this far into its run, bringing its domestic grand total ever so close to the $300 million mark. “The Marked Ones” took second place with $18.2 million, the lowest opening total in the horror franchise’s history. The #3 spot went to “The Hobbit: the Desolation of Smaug,” which held on relatively well considering there’s normally a hefty drop-off for box office veterans during the first weekend of the New Year. It dipped 44% for a $16.3 million weekend four total. Both “The Wolf of Wall Street” and “American Hustle” held exceptionally well, too. In fact, they held far stronger than “The Hobbit,” closing the gap significantly and suggesting that they both could surpass it next weekend. “Wolf” dropped 27% and took another $13.4 million to the bank while “American Hustle” took a 29.5% hit and came in at #5 with $13.2 million for its third weekend as a wide release. (via Box Office Mojo) 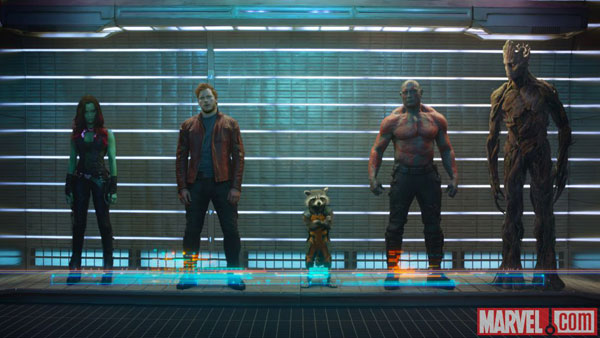