Back in the Day Movie Review

Title: Back in the Day

Seeking guidance from your childhood friends who know you the best as you struggle with making the right professional and personal life plans can be a life affirming process. That theme is prevalent in the new comedy ‘Back in the Day,’ which is being released on VOD tomorrow, with an exclusive theatrical engagement to begin on Friday in Indiana, and a national rollout to follow on January 17. Not only does the main character in the independent movie, Jim Owens, reflect on the meaning of where his career has taken him as he travels back to his hometown to reunite with his school friends, so does first-time filmmaker Michael Rosenbaum. The former ‘Smallville’ star, who made his feature film writing and directorial debuts with the movie, shot the project in his hometown in Indiana with the support of his old community. With the help of his friends and neighbors, the emerging filmmaker smartly infused his own experiences to create a genuine exploration of the processes people go through in order to find what truly makes them happy.

‘Back in the Day’ follows Jim (Rosenbaum), a somewhat successful Hollywood actor who’s dealing with the grind of everyday life that L.A. offers, and he’s bordering on a midlife crisis. But in an effort to help him move forward with his life, he listens to his friends and returns home to Indiana to attend his 20th high school reunion.

Not only does Jim have to contend with his high school friends, including Ron Freeman (Nick Swardson), Skunk (Harland Williams), Len (Kristoffer Polaha) and T (Isaiah Mustafa), he also must deal with his old rivalries as he relieves his glory days. But he begins to ponder if going back was the right decision, as the over-the-top weekend of beer-fueled barbeques and hitting the strip leads to taking revenge on an old high school principal (Mike Hagerty). Jim also revisits and old romance with Lori (Morena Baccarin), and possibly complicates her approaching wedding, which gets him into trouble with his friends and especially their wives.

Rosenbaum, who first gained directing experience by helming the 2007 ‘Smallville’ episode ‘Freak,’ as well as the 2012 short horror mystery film ‘Fade Into You,’ offered an authentic, relatable glimpse into many people’s everyday lives with ‘Back in the Day.’ Courageously reflecting on his own friendships and experiences growing up in Indiana before moving to Los Angeles to start acting, the filmmaker showcased the common misconceptions people form about their old friends and classmates once they enter adulthood. Jim reflects many people’s drive to prove they’re happier than everyone else, particularly those who feel the need to exaggerate and enhance their achievements. Rosenbaum both realistically wrote and played the struggling protagonist as thinking he needed to prove to his old friends and principal that he has grown and accepted his successes. But it isn’t until he sees everyone truly content with their jobs and relationships that he begins to understand that he’s living the life he truly wants to in California, even though he doesn’t have as much to show for it as he had originally hoped.

The actors cast in ‘Back in the Day’ all brought a sentimental insight to their characters’ humor, which helped them all connect on the set. Rosenbaum hired actors he’s friends with and has previously worked with, including Williams and Jay Ferguson, who plays Lori’s fiancé, Mark, as well as actors he instantly clicked with, including Baccain, Swardson and Mustafa, which helped forge a genuine connections in ‘Back in the Day.’ Whether Jim is leading his friends to play jokes on each other and the neighborhood, such as vandalizing their former principal’s house for continuing to look down on them, or discussing his lingering romantic feelings for Lori with Len, Skunk and T, the cast naturally exhibited genuine chemistry with each other throughout the comedy.

Not only did the authentic bonds between Rosenbaum and his co-stars create a humorous exploration of the insecurities and competitiveness people feel around those who expect success from them, the film also features genuine locations that reflect how everyone has settled into their lives. Production designer Emily Bloom created sincere middle-class homes throughout Jim’s hometown of Newburgh, Indiana. Despite being comfortable to the flashier neighborhoods he’s become accustomed to in Los Angeles, Jim longs for and cherishes the comfort he immediately feels when he walks back into the homes of Len, Skunk and the rest of his childhood friends. The director smartly and bravely chose to shoot ‘Back in the Day’ in his hometown in Indiana, instead of in the luxuries of Los Angeles, which allowed Bloom to truly capture the look of the Midwest. From the country-inspired homes and bars Jim’s friends lived in and frequented, to the humble church and high school they attended, Bloom helped contribute to the small-town feeling Rosenbaum was aiming to capture.

‘Back in the Day’ is a comedic, heartfelt effort from first-time feature film writer-director Rosenbaum, who genuinely reflected on his own experiences to make a relatable movie about how people glorify the past, as well as their friends and colleagues, without ever knowing the full truth. While Jim is living the American dream in Hollywood, working as a moderately successful actor, he begins to envy his friends who have seemingly normal relationships and jobs. It isn’t until he witnesses the amount of effort his childhood friends have to put into their marriages and relationships that he realizes it isn’t where you live or who you’re with that completely makes you happy; everyone has to first be happy within themselves, and take control of their lives, that they’ll finally be content. 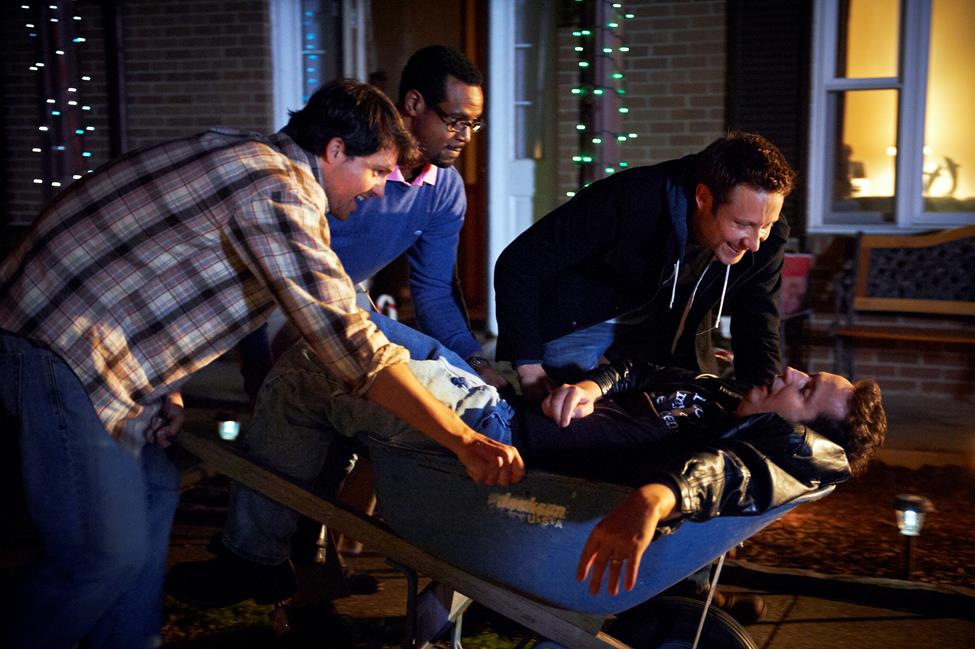