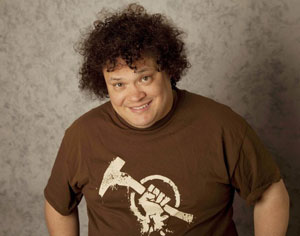 You know who Adrian Martinez is, right? Well, maybe you say you don’t, but odds are, you do. The guy may not be a headliner (yet), but it’s highly likely that you can recall his memorable performances in movies and TV shows like “Sex and the City,” “It’s Kind of a Funny Story,” “Extremely Loud & Incredibly Close,” “A Gifted Man,” “Casa de mi Padre” and loads more.

Martinez’s most recent credit comes from Ben Stiller’s “The Secret Life of Walter Mitty” in which he plays Walter Mitty’s #2, the guy just under the negative assets manager at Life magazine. When Walter heads out on his first ever adventure to track down Sean O’Connell’s coveted negative #25, it’s up to Martinez’s Hernando to support the mission from home base while the establishment is dismantled around him.

With “Walter Mitty” plowing through its theatrical run and into awards season, Martinez took the time to sit down and tell us about working on that project as well as his experience on a number of other film sets. Check out what Martinez had to say about working with Ben Stiller, hugging it out with Sandra Bullock, unleashing some vulgar humor on Margot Robbie, what it was like finding out that his work on “America Hustle” was left on the cutting room floor and loads more.

This is a lengthy one, but Martinez is brimming with experience, insight into the industry and loads of ambition, so we’re bringing you the conversation in full. If you’d like to skip around, scroll down to the time breakdown just below the video.