Hope you’re ready for some serious awards season hype because the final Movie News Cheat Sheet before the Academy Award nominees are announced is 40% nominee and winner news.

In addition to People’s Choice and Golden Globe recaps, we’ve got the BAFTA nominations and the five DGA ones, too. In non-awards territory you’ll find the latest “Star Wars: Episode VII” casting rumors as well as the official start dates for hot properties including “The Fantastic Four” and “Jurassic World.”

Ready for all of that, some recently announced SXSW selections, the box office results and more? It’s all right here in your Movie News Cheat Sheet.

1. Golden Globe Winners: “12 Years A Slave” was thought to be a frontrunner, but the Golden Globes might have just proved otherwise. Even though it did manage to make off with the Best Drama honor, it missed out on six others. Best Actor in a Drama went to Matthew McConaughey for “Dallas Buyers Club” over Chiwetel Ejiofor, Michael Fassbender lost the Supporting Actor award to Jared Leto, Jennifer Lawrence took the Best Supporting Actress win instead of Lupita Nyong’o, Steve McQueen lost Best Director to “Gravity’s” Alfonso Cuaron, Spike Jonez took Best Screenplay for “Her” over John Ridley and Alex Ebert beat out Hans Zimmer for his work on “All Is Lost.” “American Hustle,” on the other hand, came out on top. Not only did Lawrence win in her category, but the film also won Best Musical or Comedy and the Best Actress in a Musical or Comedy honor for Amy Adams’ performance, suggesting its got a solid chance at doing the same at the Academy Awards. Click here for the full list of film and TV winners.

2. People’s Choice Winners: It’s highly unlikely Adam Sandler or movies like “Carrie” and “Now You See Me” will score Academy Awards anytime soon, but that doesn’t mean the people aren’t behind them. Sandler snagged the Favorite Comedic Movie Actor honor at the 2014 People’s Choice Awards while “Carrie” took home Favorite Horror Movie over “The Conjuring,” “Hansel & Gretel: Witch Hunters,” “Insidious Chapter 2” and “Mama,” all of which were more deserving in my opinion. “Now You See Me” was named Favorite Thriller Movie and “The Heat” made off with the Favorite Comedic Movie honor, but when it came to Favorite Dramatic Movie, the people could be right in line with the Academy because “Gravity” definitely has a shot at taking top honors come March 2nd. “Gravity” star, Sandra Bullock, was absolutely the biggest winner of the night because not only did “Gravity” claim a top prize, but Bullock herself won Favorite Movie Duo with George Clooney, Favorite Comedic Movie Actress, Favorite Dramatic Movie Actress and Favorite Actress overall, too. Click here for the full list of winners.

3. Directors Guild Nominees: The Directors Guild of America’s nominees have arrived, so now we’re left to wonder, will Alfonso Cuaron, Paul Greengrass, Steve McQueen, David O. Russell and Martin Scorsese be the men in the running for the Best Director Oscar at the Academy Awards, too? Just last year the DGA named Ben Affleck their big winner, but then he wasn’t even nominated for the Academy Award. And there was also Kathryn Bigelow and Tom Hooper. DGA nods, but nothing at the Oscars. You’d think all of those guild members would vote the same way for both events, but clearly it’s not a guarantee and if anyone does manage to bump a DGA nominee out, my money is on Spike Jonze stealing Scorsese’s spot. And there’s also a chance Alexander Payne could sneak his way in there via “Nebraska.”

4. BAFTA Nominees: The British Academy of Film and Television Arts have also unveiled their nominees. In the Best Film category, it’ll be “12 Years A Slave” up against “American Hustle,” “Captain Phillips,” “Gravity,” and “Philomena.” The Best Director honor could go to Steve McQueen, David O. Russell, Paul Greengrass, Alfonso Cuaron or Martin Scorsese – the same options listed over at the DGA. The Leading Actor category pits “Nebraska’s” Bruce Dern against Chiwetel Ejiofor, Christian Bale, Leonardo DiCaprio and Tom Hanks while the Leading Actress nods went to Amy Adams, Cate Blanchett, Emma Thompson, Judi Dench and Sandra Bullock. The British public will also name an EE Rising Star Award winner. The talent in contention is Dane DeHaan, George MacKay, Lupita Nyong’o, Will Poulter and Léa Seydoux. Click here for the full list of nominees and find out who wins during the ceremony on Sunday, February 10th.m

5. Jesse Plemons Up for Lead Role in “Star Wars: Episode VII:” If you aren’t familiar with Jesse Plemons from “Friday Night Lights” and/or “Breaking Bad,” just wait for it because according to The Wrap, J.J. Abrams has his eye on him for a lead role in “Star Wars: Episode VII.” No offer has been made, but apparently the casting team liked Plemons’ taped audition and now he’s got plans to meet with Abrams in person next week. The Wrap claims to have three sources confirming that Plemons is a top contender, but things were looking good for Benedict Cumberbatch, Chiwetel Ejiofor and Sullivan Stapleton, too, and nothing panned out there. Hopefully that won’t be the case now because, first of all, it’s about time we get some confirmed details, but perhaps more importantly, Plemons is a fresher face with a unique charm and style and he could churn out a standout “Star Wars” character. Meanwhile, THR has some “Star Wars” contenders of its own to put in the mix. The outlet is reporting that Abrams is also considering Michael Fassbender, Adam Driver and Hugo Weaving for roles. THR also notes that some major changes have been made since Michael Arndt left the project in the fall and passed along his writing duties to Abrams and Lawrence Kasdan. Apparently Arndt wanted to focus on Luke Skywalker, Han Solo and Princess Leia’s children and put Luke, Han and Leia themselves in supporting roles. Abrams, on the other hand, insisted that the original trio return to the spotlight so they could have one more go-around before their children made the move from supporting to main players in “Episode VIII” and “IX.”

6. Jon Favreau’s “Chef” Set to Open SXSW 2014: Jon Favreau’s “Chef” will open the SXSW Film Festival on March 7, 2014. Favreau also stars in the film as Chef Carl Casper, a chef who ditches his high-profile job when his boss demands that he sacrifice his creative integrity. Carl winds up in Miami where he joins forces with his ex-wife (Sofia Vergara), his friend (John Leguizamo) and his son (Emjay Anthony) to open a food truck. On top of that, the SXSW press department also confirmed that the Jeremy Sisto-starrer “Break Point” and the “Veronica Mars” movie will be featured as well. The majority of the 2014 line-up will be announced on Thursday, January 30th, but the Midnighters and the short film selections will be held until Wednesday, February 5th.

7. “Gone Girl” Gets an EW Cover: There are loads of 2014 features worth keeping an eye on, but Entertainment Weekly opted to give their 2014 Preview cover to just one – David Fincher’s “Gone Girl.” In fact, the publication also recruited Fincher himself to do the photo shoot. The film is based on the Gillian Flynn novel in which a woman (Rosamund Pike) disappears during her fifth wedding anniversary, branding her husband (Ben Affleck) the prime suspect. Even if you’ve read the book, the movie should manage to catch you off guard because when citing lessons learned while making “The Girl with the Dragon Tattoo,” Fincher admitted, “We may have been too beholden to the source material.” Flynn, who wrote the script herself, also noted, “There was something thrilling about taking this piece of work that I’d spent about two years painstakingly putting together with all its eight million LEGO pieces and take a hammer to it and bash it apart and reassemble it into a movie.” You can read more about “Gone Girl” as well as 98 other highly anticipated 2014 movies, TV shows, albums and books in the latest issue of Entertainment Weekly.

8. “Jurassic World,” “Terminator” & “Fantastic Four” Shoot Soon: Three wicked rumor mills have to stop churning soon because according to Production Weekly, “Jurassic World,” “Terminator” and “The Fantastic Four” will all be in production by the summer. Josh Trank will get behind the lens for “Fantastic Four” first with the film heading towards a March 31st start in Baton Rouge. Alan Taylor will roll on “Terminator” next, kicking things off in New Orleans on April 21st. Chris Pratt, Bryce Dallas Howard, Ty Simpkins, Jake Johnson, Nick Robinson and Irrfan Khan will be in Louisiana for “Jurassic World’s” June 2nd start, but the publication didn’t divulge a home city for the production. (via ComingSoon)

9. Trailers: “The Railway Man,” “Endless Love,” “Clown:” The first trailer for “The Railway Man” featured top talent and an intriguing narrative, but this new iteration is exponentially more powerful thanks to masterful intercutting between two time periods that allows one to enhance the other. “Endless Love” may be an ideal Valentine’s Day release, but as someone who hasn’t been charmed by Alex Pettyfer, the material we’ve been given thus far feels hollow and this final trailer is no different. Finishing this trailer section off on a high note, we bring you the first promo for what looks to be an especially twisted nightmare called “Clown.” This piece establishes a brilliant beat, one that’s highly unique and quite disconcerting in and of itself, but it’s the main character’s physical and behavioral transformation that really confirm that this could be a deeply disturbing winner.

10. Box Office: “Lone Survivor” didn’t just edge out its competition. It demolished it. The film managed to post $13,395 per theater in its 2,875 locations, giving it $38.5 million in total. Even though “Frozen” came in at a distant second, $15 million in your eighth weekend out is still highly impressive. “The Wolf of Wall Street” maintained nearly 70% of its weekend two profits, letting it take in another $9 million, bumping newcomer “The Legend of Hercules” down to #4. That one only managed to take $4,087 per theater and with only 2,104 locations in total, that amounted to $8.6 million for its first weekend out, a major disappointment considering the film’s $70 million price tag. “American Hustle” rounds out the top five with $8.6 million of its own after a 30.7% weekend four to five drop. (via Box Office Mojo). 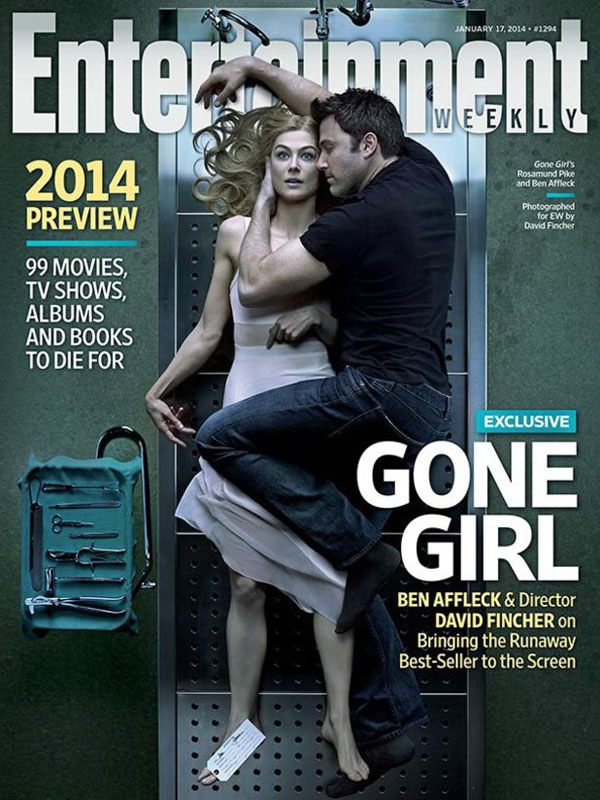