Go on a fantastic journey with the DVD release of the family fantasy film, ‘The Adventurer: The Curse of the Midas Box.’ RLJ/Image Entertainment will release the film on home entertainment on February 11.

The movie stars Michael Sheen, Lena Headey, Sam Neill, Ioan Gruffudd and Aneurin Barnard. ‘The Adventurer: The Curse of the Midas Box’ was written by Christian Taylor and Matthew Huffman, and is based on the novel, ‘Mariah Mundi,’ by G.P. Taylor. The film was directed by Jonathan Newman.

Ancient mysteries. Powerful evil. And a fearless hero’s quest through a fantastical realm of steam-powered wonders and sinister magic…In ‘The Adventurer: The Curse of the Midas Box,’ seventeen-year-old Mariah Mundi’s life is turned upside down when his parents vanish and his younger brother is kidnapped. Following a trail of clues to the darkly majestic Prince Regent Hotel, Mariah discovers a hidden realm of child-stealing monsters, deadly secrets and a long-lost artifact that grants limitless wealth – but also devastating supernatural power. With the fate of his world, and his family at stake, Mariah will risk everything to unravel the Curse of the Midas Box!

Watch the official trailer for ‘The Adventurer: The Curse of the Midas Box’ below. 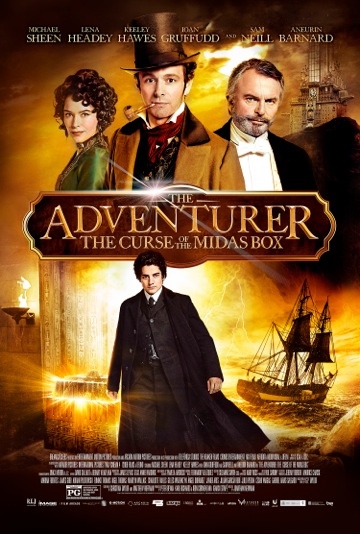