Breaking out of your comfort zone to explore new possibilities can be an exhilarating experience for people trying to infuse their lives with new purpose and meaning. But when the serenity of a seemingly picturesque and ideal town soon reveals that life for its citizens isn’t as perfect as it appears to be, the true meaning of happiness tends to become skewed. That’s certainly the case in the new British historical romance drama, ‘Summer in February,’ which is now available On Demand and begins its limited American theatrical run tomorrow. Based on a true story, as well as the novel of the same name by Jonathan Smith, the Christopher Menaul-helmed film delves into the possibilities of what happens when someone realizes what they initially thought would make them happy isn’t exactly as it seems.

‘Summer in February’ follows a sweeping romance between two best friends and a promising new artist in Cornwall, a bohemian artist colony on the scenic coasts of pre-World War I England. Being born into a working-class family, painter Sir AJ Munnings (Dominic Cooper) rises to become one of the premiere British artists of his time. While balancing his rising career and the need to find an inspiring muse, he meets aristocratic socialite, Florence Carter-Wood (Emily Browning), who hastily moves to the village to move in with her brother, Joey (Max Deacon). Searching for peace and solace after fleeing from the suitor her father intended her to marry, she and AJ form a bond and understanding over their mutual love of painting.

But when AJ begins to show his callous personality, Florence begins to also fall for his best friend, Gilbert Evans (Dan Stevens), an off-duty military officer. While the two try to stop their growing attraction to each other, out of respect for AJ, Florence and Gilbert formed a true love and connection that their loyalty to the prized painter can’t even break.

The stunning locations featured in ‘Summer in February,’ from the jagged rocks and cliffs on the beaches of Porthcurno and Holywell, to the lush meadows of Chiltern Hills in Oxfordshire, where AJ’s iconic painting of Florence on horseback was painted, to the historic splendor of St. Paul’s Church in London, helped infuse the story with an at-times harrowing romanticism. While the picturesque, vibrant settings throughout the artist colony were mainly isolated, which helped many of the painters find inspiration for their work, they also served as a telling backdrop for Florence’s relationship with AJ and Gilbert.

While she was initially drawn to both AJ’s intense and possessive personality, both towards his work and her, as well as the alluring beauty of the town, Florence soon discovered upon closer inspection how both could be deceiving. AJ couldn’t fathom her interest in his best friend, even after he began painting her, and would lash out towards her in jealousy. The sprawling cliffs across the beach and the overpowering trees of Chiltern Hills, where the two would often work together, which were meant to offer serenity, began to represent the loss of Florence’s freedom in Cornwall. She would often visit the tough terrain to contemplate the path her life had taken.

Not only do the captivating locations featured in ‘Summer in February’ powerfully represent the difficulties and obstacles AJ and Gilbert were forced to contend with as their respective relationships with Florence began to form, so does the gripping performance given by Cooper. While Browning easily connected with Florence’s sensitive, loving nature and Stevens effortlessly embraced Gilbert’s nurturing personality, Cooper truly transformed into the at-times conniving AJ. While the artist was able to charm the townspeople of Cornwall with his paintings, Cooper fully unleashed the artist’s controlling temperament as he truly came to uncover the romantic emotions growing between Florence and Gilbert.

‘Summer in February’ is a visually stunning rendering of the harrowing experiences that ultimately culminated between AJ, Florence and Gilbert in 1912-1913 in Cornwall. The enthralling locations Menaul used in the English countryside not only visually emphasized the at-times artificial serenity of Cornwall, but also reflected the dangers the artist colony presented if someone like Florence challenged the status quo. Coupled with Cooper’s intense portrayal of an increasingly possessive AJ, the romantic drama is an intense portrait of the not-so-surprising difficulties that arise from the natural competitiveness of what’s supposed to be a welcoming community. 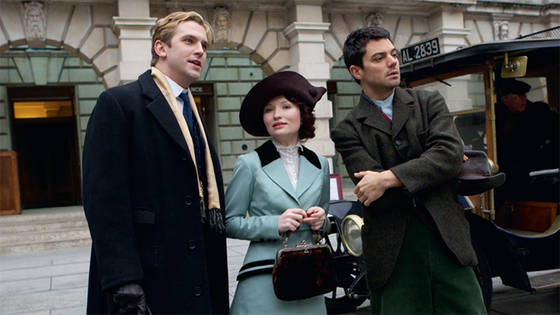