The unfortunately common nature of school shootings today makes it ever more likely that films will choose to tackle them. The story of a child’s life lost becomes the story of his or family’s life transformed, destined never to be the same because of the permanent and irreversible nature of that person’s absence. Rudderless, the feature film directorial debut of actor William H. Macy, charts the life of Sam (Billy Crudup), who lives a solitary life after the death of his son in a shooting at a college library and whose son’s recorded original music provides Sam with an unexpected way to connect with him.

Sam’s descent into loneliness and self-destructive behavior begins shortly after his son’s death, and after a drunken trip to his office, the film skips ahead two years. Sam is living on a boat, doing just about everything he can to get those around him to despise him, most notably urinating into the lake on multiple occasions. His ex-wife Emily (Felicity Huffman) comes by to drop off Josh’s old things because she is moving, and a visit to a bar with live performances inspires Sam to give one of his son’s unpublished songs a try. The enthusiasm of the eccentric Quentin (Anton Yelchin) leads to something even more impactful: the formation of a band whose signature songs are those written by Josh.

Rudderless is driven equally by its plot and its music. Watching the power of Josh’s songs to enliven Sam and bring him back from the edge is incredible, and Quentin’s excitement about getting to have his own band is particularly memorable as well. Inevitably, the truth about the origin of the songs cannot go unrevealed forever, and the film packs an additionally devastating twist that makes everything all the more searing and meaningful. The performances of the songs by Sam alone and then by the band constitute some of the film’s definitive high points.

One of the initial defining film roles that Crudup had was a musician in Cameron Crowe’s Almost Famous. After a string of less showy roles, Crudup is back with what could well be the performance of his career. His portrayal of Sam before his son’s death is a slick, successful operator, and his curmudgeonly hermit is a far cry from that. Watching Sam’s transformation back into a living, breathing person is what’s truly magnificent, and Crudup is also quite skilled in his musical scenes. Yelchin is typically awkward and great as Quentin, and the standout of the supporting cast is Laurence Fishburne as the owner of a music store.

Rudderless treats its subject matter with a certain respect, yet the film becomes something else altogether due to its focus on the music and the way in which it completely reinvigorates all its characters. Macy’s first time behind the camera is a resounding success, and it’s very easy to get caught up in the film’s many musical scenes that showcase its characters’ passion for the music and the art of performance. Macy wisely casts himself in a small role as the bar owner, happy to take in the product of his work without needing to be its center, a strong sign of a successful project. 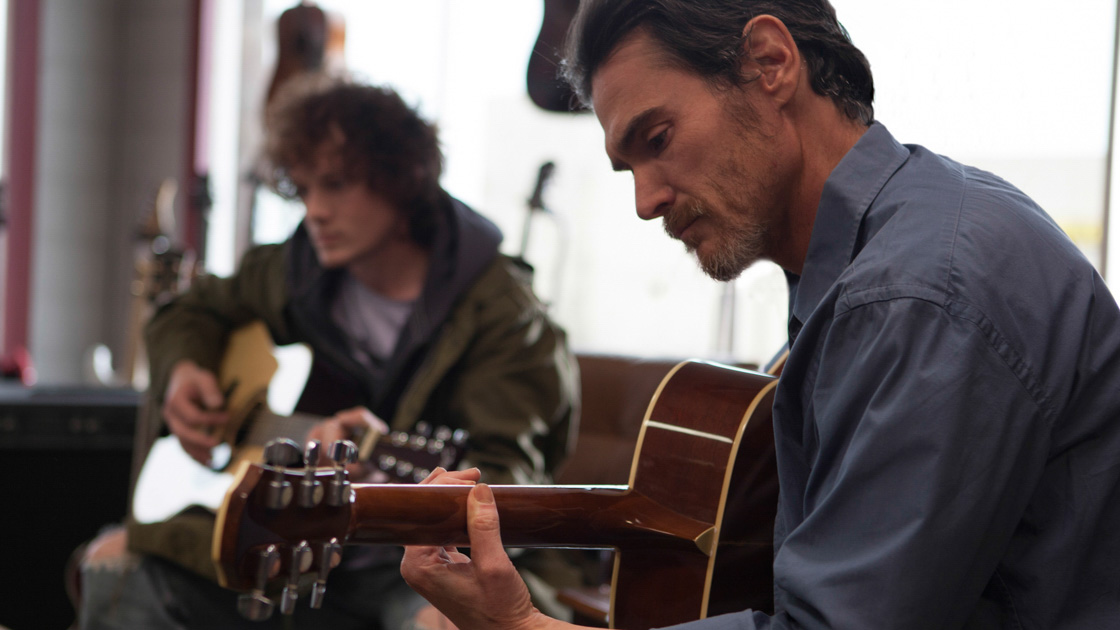