Title: If You Build It

An engaging documentary about the transformative power of the sort of teacher who is able to connect with and inspire teenagers, “If You Build It” illustrates the benefits of the practical application of alternative education, and the ripple effects that it can often create for a community — if and when that community is ready to embrace it. Telling the story of a pair of architectural designer-activists who alight upon a rural burgh with dwindling economic opportunity, the film is a bittersweet exploration of outreach and advocacy.

Directed by Patrick Creadon, “If You Build It” unfolds in the small town of Windsor, North Carolina, in poor Bertie County. Idealistic partners in both business and life, college-educated architects Emily Pilloton and Matt Miller arrive with a different sort of curriculum. Their two-semester, off-site high school class is called Studio H — so named for “humanity, habitats, happiness and health.” (Though how this misses the chance for a 4-H Club reference, I’ll never know.) It involves the creative planning, refinement and construction of a number of projects for a small group of students, about 10 in number. First they’ll make “cornhole” (also known as beanbag toss) boards, then chicken coops. Their third project — with $150,000 in grants covering equipment and supplies — is a yet-to-be-determined structure for the city of Windsor, which ends up being a farmer’s market pavilion.

In its passionate subjects, “If You Build It” would have enough to easily appeal to sympathetic viewers who fall hard for inspirational tales, and especially those involving adolescents. But Creadon, the director of “Wordplay” and “I.O.U.S.A.,” is a gifted filmmaker with an intuitive understanding of how to complement and bolster his main narrative arc with compelling details, as he does here with an interwoven revelation about lessons learned by Miller from his post-graduate thesis work in Detroit.

Perhaps surprisingly, while interviews with the students at various points over the course of more than a year greatly inform the movie, “If You Build It” doesn’t delve into the home lives of its subjects in the way that recent “Medora” did, for instance. That film, about a hapless small town Indiana high school basketball team trying to secure their first victory in more than a year, was much more a metaphorical exploration of the wheezing death rattle of trickle-down economics. “If You Build It,” which could easily chart a similar course, largely eschews this tack. It’s a choice, but it works fine for this film.

“If You Build It” is funneled a bit more through the perspective of Miller and Pilloton. The film paints a picture of a school board that is change-resistant or possibly worse. We see an abandoned elementary school, renovated two years prior to being closed down; and when the county superintendent, a supported of Miller and Pilloton, is fired, the intimation is that his prescriptions for change were somehow too radical. (The pair subsequently each forfeit their $40,000 salaries in their entirety, to keep the class afloat). Creadon doesn’t dig down into the politics of the school board, however, and how widely or deeply their efforts might be supported. Early on, this is perhaps for the best; “If You Build It,” after all, is more interested in the elemental bond forged between high school kids and the type of instructor who is willing to move beyond the drill sergeant oversight of rote memorization of facts and embrace the role of mentor. Too much time spent in the weeds, as it were, would be time wasted, and take away from that focus. But in the home stretch, as deadlines loom and Pilloton and Miller’s future in the town becomes a topic of debate, these unaddressed subplots and sidebars seem conspicuous in their absence.

Overall, though, Creadon’s film touches a viewer’s heart, because of the manner in which it so roundly showcases the reality that kids aren’t blind to the social rot around them. They crave answers and opportunity for stability and upward mobility, just like adults. There’s a forlorn quailty to “If You Build It,” but in its small, to-scale triumph there is also a glimpse — and a hope, really — of seeds planted for even greater future change.

NOTE: For more information, visit the film’s website at www.IfYouBuildItMovie.com. 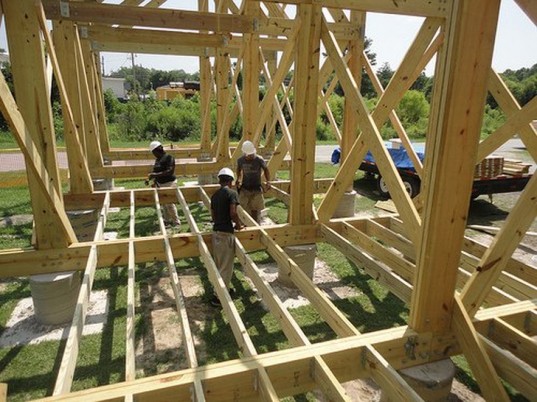