Young adults often struggle to find their true identities as they make the final transformation into accepting full responsibility over their lives, and prove they can live up to the high expectations that have been placed on them. Not only do they have to find a successful career they enjoy and excel in, they also have to find ways to continuously fortify their personal relationships. This continued struggle is the gripping main motivating factor in writer-director Maggie Kiley’s first feature film, the independent comedy-drama, ‘Brightest Star,’ which opens in select theaters and on VOD tomorrow.

‘Brightest Star’ follows the indecisive, 20-something unnamed protagonist (who’s called The Boy in the closing credits and is played by Chris Lowell), as he struggles to find his place in the world after he finishes college. The wavering young adult is determined to find a meaningful career that not only truly satisfies his quest to leave an impact on the world, but also makes him, his family and friends happy. But he becomes hesitant to move past his relationship with his longtime girlfriend, Charlotte (Rose McIver), who he lovingly remembers in flashbacks to when they first met and fell in love in college.

The Boy chooses to remain skeptical about the potential opportunities New York City has to offer him. But he seems to start getting his life back on track as he stays with Ray and Lita (Alex Kaluzhsky and Jessica Szohr, respectively), the couple who move into the apartment he shared with his ex-girlfriend. The struggling protagonist seems to start getting his life back on track after he quits his office job, in which he worked for Charlotte’s father, Mr. Markovic (Clark Gregg), and was miserable. He takes a seemingly menial job as a janitor in the laboratory of an astronomer (Allison Janney). In the process, The Boy discovers how fulfilling his life can be when he seeks out meaningful relationships and a career path that truly makes him happy.

Kiley effortlessly cast the romantic comedy-drama with relatable, complex actors who gave natural performances of their respective characters who are struggling to find a sense of identity and purpose as they enter a new phase in their lives. Despite playing the unnamed main character in the film, who isn’t given as much backstory as the supporting characters, Lowell convincingly portrayed the struggling protagonist with a sense of authenticity.

While The Boy firmly knows he wants to maintain his romantic relationship with Charlotte, even as she becomes less emotionally attached to him as she strives to launch a successful career, Lowell realistically infused his character with a sense of unease when it came time to think about his own professional future. The two greatly differ in opinion on where they should be taking their lives after they finish college, with McIver inspiringly playing Rose as wanting to help her troubled boyfriend find a job he truly loves and fulfills him. The two actors smartly play off of each other throughout the course of the story, and naturally develop a believable rapport that naturally evolves throughout their time together, from holding the same liberal ideals in college to arguing over what type of career to embark on after graduation.

The film’s supporting cast also offered diverse, captivating performances which added both humor and sentimentality to The Boy’s harrowing search for his purpose in life. McIver, in particular, gives a heartfelt performance as Charlotte represents the feelings of many young adults when they first finish school, and they’re on a continuous search to find their own identities. While she’s honestly working on the idea of staying in her relationship with The Boy when her life and career are pulling her elsewhere, her strong desires to broaden her own horizons lead her to the devastating realization they are no longer meant for each other.

‘Brightest Star’ is an intriguing insight into the difficulties and struggles young adults face, both in their careers and personal relationships, after they finish school and are haplessly trying to forge a life plan for themselves. As a first-time feature film filmmaker, Kiley brilliantly found intriguing actors who gave sympathetic performances of their respective characters, who are struggling to find their rightful places in the world. Lowell realistically gave his character a sense of unease when it came time to think about his professional future, while McIver respectively played Rose as being determined to help her troubled boyfriend find a job he truly show his true potential. The romantic comedy-drama is abundantly profuse of the important lesson that even though two people may truly love each other, their feelings alone won’t hold their relationship together if they have different life goals and ideals. 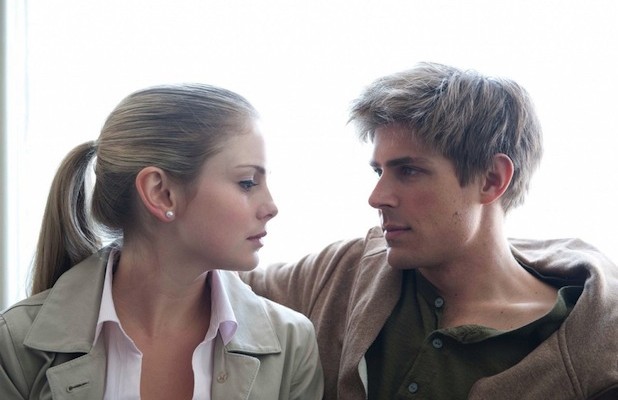