Love Is In the Air Movie Review

Title: Love Is In the Air

From the opening jazzy riffs of musical accompaniment to “Love Is In the Air,” about bluebirds and the spring, it’s clear that director Alexandre Castagnetti’s French import is going to be a cinematic approximation of lives less ordinary. And so it is. Its story treads well-worn ground, certainly, but this robust exercise in romantic comedy formula has such pleasing, engaging performances and such a breezy, deft touch with push-and-pull gender dynamics that it escapes the over-determined nature of its final reel and by and large trumps most like-minded American product.

The film centers around lothario Antoine (Nicolas Bedos), who on a trans-Atlantic flight from New York City to Paris finds himself seated next to sculptress ex-girlfriend Julie (Ludivine Sagnier), to whom he hasn’t spoken in three years. After a panicked phone call to his friend to steel his spine, Antoine makes a play at reconciliation, only to learn that Julie is engaged and set to be married to tax attorney Franck (Arnaud Ducret) in four days. The rest of the film unfolds with intrigued passengers interjecting amused commentary as Antoine and Julie litigate their meet-cute and relationship over flashbacks of the same.

That “Love Is In the Air” winds its way to a pat ending involving characters who, in the real world, might not actually be best suited for one another is never much in doubt. But the ride counts for something in life, and certainly movies as well, and Castagnetti’s film has the benefit of two attractive leads with the ability to communicate shades of grey in their flirtation and sparring. (Its French title is “Amour & Turbulences,” which gives something of a better idea of the jostled tone than the movie’s bland American moniker.) There’s a self-awareness to the project that never tips over into dopey referential absurdity or straight-up satire. Castagnetti and his collaborators are all keenly aware of the power of opposites attracting, and so the movie has Antoine and Julie engage his philandering tendencies and her daddy issues, to net positive effect. If it’s a fantasy viewers are being sold, it’s at least assembled from parts recognizably of the real world.

What makes “Love” sing so are its performances, too — especially Sagnier, who’s perhaps best known to arthouse audiences for her collaborations with François Ozon. She has the ability to inject pathos into Julie that doesn’t weigh down the entire film, and so the thrusts and parries of its flashback sequences feel full-bodied. Lovers of buoyant, improbable love stories will love “Love Is In the Air.” It has vivacity and enough authenticity to make us believe its sweet fabrications. 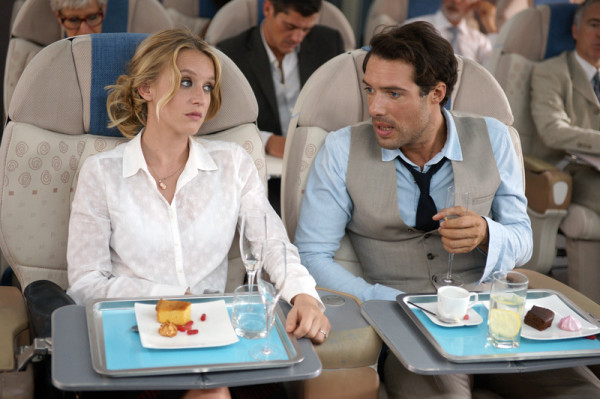