“Winter’s Tale” is not a true story nor a love story, but rather, the comedy of the year.

Based on Mark Helprin’s 1983 novel, “Winter’s Tale” focuses on Colin Farrell’s Peter Lake. We meet Peter when he’s just a baby in 1895. His parents so desperately want to come to the United States, but because they’ve got heart conditions, they’re not allowed in. However, it doesn’t have to be that way for baby Peter. Instead of re-boarding their boat and heading back home together, they plop the infant into a tiny model boat, lower him down from their own and then watch as he presumably sails off to New York City.

That covers just about ten minutes of the movie, but right there you’ve already got two devastating problems. First off, this movie is one of magical realism. You’re not going to get a theater full of people to buy into that unless you establish it right from the start. This odd display of two parents risking their child’s life in an absurd effort to give him a better one does not do that in the least, making it even more difficult to adjust and accept when magic is thrown into the equation a little later on. And that brings us to detrimental issue #2, believability. There are countless scenes in this movie when characters are doing or saying something oh-so seriously that makes little to no sense and that turns out to be a highly successful formula for creating laugh-out-loud-worthy moments.

After this boat baby nonsense the narrative hones in on an older Peter, one who’s fine getting by as a thief. However, one day, he walks into a house ready to rob the place and realizes that someone is actually home. The moment Peter catches sight of Beverly Penn (Jessica Brown Findlay), that’s it; he’s ready to throw away everything he’s ever known to keep her happy and healthy, a near impossible task considering she suffers from a deadly form of consumption. Beverly needs a miracle and Peter soon comes to believe that perhaps if he loves her enough, that will keep her alive.

This is what should define “Winter’s Tale” as a romance movie, but really, there’s no romance in this relationship. Peter and Beverly merely make eye contact and that’s it. There’s no courting, no relationship building, and just one single poorly shot display of intimacy. Both Brown Findlay and Farrell should be easy to root for because they’ve got such warm, natural on screen presences, but in this case, what they’re doing and saying is so ridiculous that the whole situation turns into a bad joke. Beverly’s suffering from a sky-high temperature and on her way to a young death, but you can’t help but to giggle while watching her hang out in her chilly rooftop bungalow.

Even worse is poor Russell Crowe. His character is Pearly Soames, a demon/crime boss hybrid of sorts. His thing is that he doesn’t like Peter very much and is determined to ruin his relationship with Beverly. Why? Apparently Pearly took Peter under his wing at a time and then Peter ditched him, but that’s as far as the explanation goes. Why was Pearly so invested in Peter? Why did Peter leave Pearly? Does Peter know that Pearly is a demon? Without answers to these questions there is no way to understand why Pearly needs to kill and, therefore, no suspense within his threat. Exacerbating the problems with the character further is writer-director Akiva Goldsman’s direction. There’s at least a scene or two when Crowe slips into a pirate-like accent, another where he delivers a hilariously booming “Enter,” and countless moments that’ll simply make you sad that Crowe took all of this so seriously.

And that brings us to Will Smith. Yes, Will Smith is in this movie and he’s playing Lucifer nonetheless. It’s actually quite entertaining watching him go toe-to-toe with Crowe, but only as a standalone sketch, not in the context of the rest of the narrative. There’s only one thing that can pull you out of a story faster than throwing a big name star in a bold role right smack in the middle of a movie and that’s throwing in a big name star in a bold role and then having him wear super sparkly hoop earrings and a Jimi Hendrix t-shirt even though the scene is meant to take place in 1916.

There is a mythology to “Winter’s Tale,” but rather than explain a single drop of it, Goldsman treats the audience like his characters, as though they’re just going to accept bizarre behavior with nonchalance. Peter just happens to come across a horse that can fly over fences; Farrell can play it as though it’s no big deal, but things are not going to fly, no pun intended, with a logical human being. Who doesn’t enjoy a good fairy tale? Suspending disbelief and experiencing a happily-ever-after scenario is undeniably enjoyable, but you’ve still got to earn the right to have a moviegoer have fun with such a scenario by first making him or her believe.

Apparently the crux of the story is a battle between good and evil, but it’s highly problematic that some players aren’t even aware that they’re in the middle of it and also that the ones that are, have a totally ludicrous agenda. Pearly is very clearly established as the bad guy and Lu as his superior, but it’s distractingly odd that the devil has no jurisdiction beyond the five boroughs. Peter Lake is our hero, but considering he seems so unaware of what Pearly is capable of, it’s hard to be sure whether or not he even knows he’s part of this fight. And that also begs the question, what is everyone even fighting for? Peter just wants Beverly; his mission has nothing to do with defeating Pearly, but why is Pearly hell-bent on stopping Peter from finding true love? Do miracles weaken the dark side? Had that simple point been made, it could have fixed a gaping plot hole.

Peter’s mission is clear in the first two acts of the movie, but when the setting changes to modern day, his wants are absolutely decimated by this nonsensical scenario. Peter Lake is literally head-butted forward in time – or so it seems because it’s never made clear whether Peter has been living for a hundred years or if he just comes to when we meet him again as chalk doodle master in the street. Even though he now looks like a homeless person, spends all of his time maniacally scribbling the same woman with red hair and walks around like a thoughtless zombie, he still somehow manages to keep himself relatively healthy and afford an apartment in New York City. Eventually, in comes Jennifer Connelly’s Virginia who strikes a chord with Peter because she “lives on 12th street and [she has] a chicken.” It just so happens that she’s also the key to letting Peter reconnect with Beverly’s younger sister who must be at least 105 at this point yet still looks like Eva Marie Saint and runs a newspaper.

After spending nearly two hours watching horses fly, Crowe growl and a slew of characters come together so that one single life can be saved, the movie literally asks, “Why would so many things conspire to save one girl’s life?” That’s an excellent question, movie. Perhaps you would have been better if you actually answered it.

This is just a really sad situation for Goldsman. He’s an Academy Award winner with solid titles to his name both as a writer and producer yet he seems to have just gotten totally lost in the material. It feels as though he read “Winter’s Tale,” pinpointed the parts that spoke to him and just tossed everything else out the window with no regard to how someone who hasn’t read the book might perceive the story without what he deemed unnecessary. Perhaps it was an issue of becoming too invested and too dedicated, and losing the ability to step back and assess from the standpoint of a “Winter’s Tale” first-timer, but that still doesn’t excuse a number of other flaws in his work like, let’s say, the atrocious dialogue. This is the guy who wrote “A Beautiful Mind.” He’s got to know that making a character say, “I’ve never been kissed on the mouth,” is not a normal way of articulating that particular sentiment.

Goldsman’s visuals are a detrimental issue, too. The visual effects, including a fly horse, are laughably heavy-handed and cartoonish, but the bigger problem is that he can’t seem to figure out when it’s necessary to give the viewer access to a character’s face. There are loads of scenes during which we need a clean shot of the performer to truly connect and understand what they’re feeling about what they’re saying, but instead, we’re looking at the back of their heads.

“Winter’s Tale” is a bad movie, but it’s so bad that it’s worth a booze-fueled communal watch. When I put together my worst films of the year list, it’s typically populated with movies that are so bad that they frustrate me to the point of making me angry. “Winter’s Tale” is different. “Winter’s Tale” has moments like the one during which an enraged Pearly rips a man’s face off, plods his bloody hand on a tablecloth and then holds up a picture that he insists is a drawing of a red-haired woman. Even better, then a henchman takes that picture and uses it to identify Beverly, literally looking at her and then looking at the picture and nodding to affirm that Pearly’s artwork successfully IDed the target. It’s laughable and it’s quite fun to laugh at, so if you’d like a hearty laugh at someone else’s expense, you’re in luck because that’s the one thing “Winter’s Tale” does quite well. 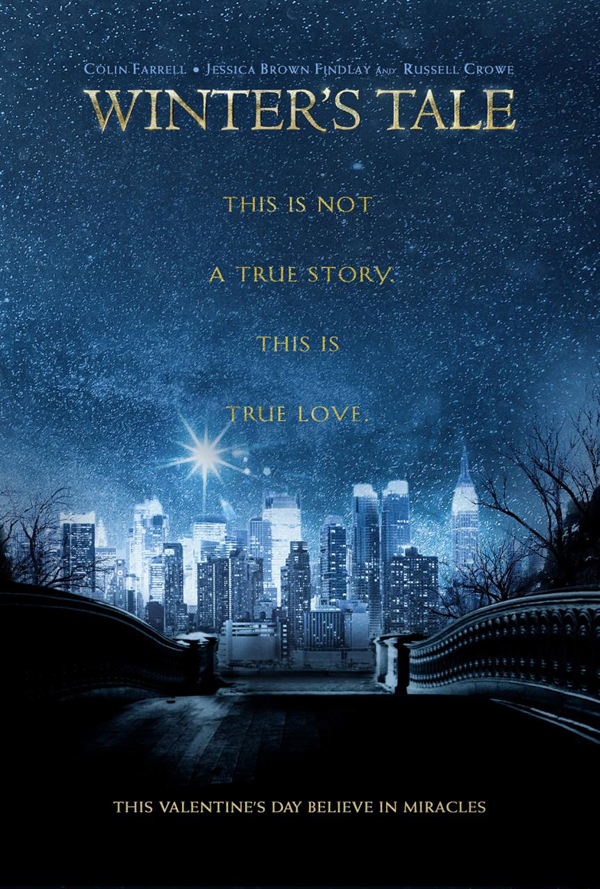