When you see people who have just come back from a vacation, you ask, “How was your trip?” Did you ever hear someone say, “OK, I guess, but there were so many hassles—customs, overcharges, bad weather, generally miserable time come to think of it.” Not a chance. “Great time, fabulous weather, can’t wait to go back.” After seeing Roger Michell’s “Le Weekend,” his fourth collaboration with scripter Hanif Kureishi, you’ll be discussing the weekend holiday taken by Nick Burrows (Jim Broadbent) and his wife Meg (Lindsay Duncan). Did they have a good time, all in all, or should they have stayed home? Nick and Meg, married for thirty years, take one weekend from their home in Birmingham, England to Paris, to rekindle their marriage—and what marriage does not need rekindling after three decades? Mostly a drama about a relationship between an older man and his older mate but with ample comic undertones, “Le Weekend” shows us the look of Paris from the terrace of a five-star hotel and the long, philosophic look taken by a man and a woman, the former facing the anxiety of being left alone while his wife is considering taking off and starting anew in a flat. It doesn’t help that Meg is sick of her teaching job and Nick has been ordered to take early retirement.

Meg may be encouraged in her existential wish when the couple run into Morgan (Jeff Goldblum), a former student of Nick, who is financially successful and enjoying his bond with a new, younger wife as a British expat in Paris. By contrast, Nick, who teaches philosophy at a school that “turns out idiots” and Meg, who is a teacher as well, have to support a son and the son’s family. They are now in an expensive city where they cast money problems aside (she doesn’t like the walk-up hotel they reserved so they switch to an elegant, costly place). They dine well in one of the fine Paris eateries and, without the money to pay an exorbitant bill, they run out—which is pretty funny, I suppose, when you’re dealing with middle-class folks and not with someone like Precious who bolts from a greasy spoon with a bucket of fried chicken.

“Le Week-end” provides a nice soundtrack largely of the kind of music you’d hear from an orchestra in a posh hotel serving as background music which, in the case of Meg and Nick serve only to rub in their lack of cash or a balance in their credit card to pay the bills for this single weekend and, what’s more, are facing the anxiety of a possible rupture in their long-term marriage.

The highlight of the picture is a dinner engagement that Meg and Nick attend at Morgan’s invitation where, on top of all their other woes, they simply do not fit in with a group of intellectuals—a sculptor, some writers, and assorted sophisticates. After a bubbly speech by Morgan’s new, young wife, the crowd is rendered speechless by an intimate confession from Nick, a feeling that he is wasting his life, though Morgan’s strange and neglected son from a first marriage, Michael (Olly Alexander), with whom Nick had enjoyed weed and booze, labels the talk “awesome.”
Needless to say, Jim Broadbent is incredible as he is in any role, whether the husband of Margaret Thatcher in “The Iron Lady” or Lord Kelvin in “Around the World in Eighty Days,” so it’s no wonder that he has five movies coming up in production and pre-production. Lindsay Duncan’s British accent and soft speech can be difficult to understand at times while, by contrast, Jeff Goldblum, the one major American actor in the movie, is loud, clear and amusing. If the drama comes across to some (like one Australian critic) as “not heavy enough to matter,” “Le-Weekend” is the kind of film that mature, intelligent moviegoers would not want to miss. 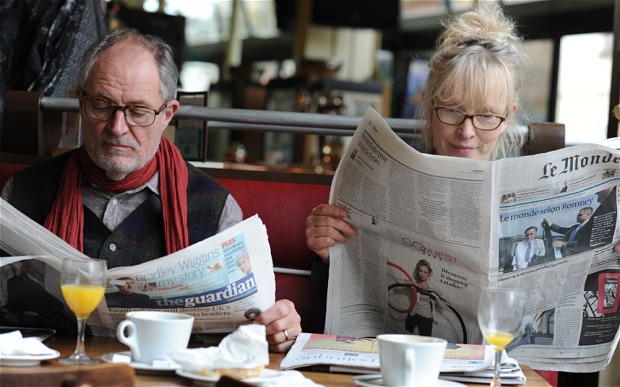