In the inventive low-budget horror thriller “The Den,” Canadian-born actress Melanie Papalia plays Elizabeth Benton, a graduate student who undertakes a study on the eponymous video-chat site, and witnesses a gruesome murder via webcam. Others dismiss it as a viral prank, but Elizabeth isn’t so sure, and finds herself trapped in a twisted game in which she and her loved ones are targeted for the same grisly fate. For ShockYa, Brent Simon recently had a chance to speak with Papalia one-on-one, about the film, bad Skype connections, ChatRoulette nudity, Uwe Boll, and how John Travolta would pronounce her name at the Oscars. The conversation is excerpted below:

ShockYa: You were in another movie centering around a web-chat killer, “Smiley.” Were you concerned about potentially revisiting the same territory with this film?

Melanie Papalia: No, I personally never thought about it. And it’s funny that so many people have commented on that, because I think when they see the movie they’re like night and day, they’re so different. I think once people see “The Den,” “Smiley” won’t be mentioned again. You know, they’re so different that I never worried about it.

ShockYa: You’re on camera for most of the film, and “The Den” has a naturalistic vibe. But there are plenty of films where you would describe the acting as naturalistic within the context of a scene, playing a character with other actors, versus here, and (the notion) of playing this character in a series of private moments. Did you have to do a lot of work to get to that place?

MP: It was definitely a challenge, but it was also like something that was a dream because I always wanted to do a scarier movie that made people feel like they were watching it for real. There were a lot of times where I had to ask myself what Elizabeth would really be thinking — and a lot of the time that might be something like I was making a really ugly face to the camera, because I was thinking or off in my own world. I had to really forget a camera was there and really (get lost) in Elizabeth’s thoughts, and all the little things that we do. I had to be able to show the camera all of that, and that was very interesting. …It was something I’d never done before, and I felt like I had to put a lot of thought into it. There was a lot going on with her at all times.

ShockYa: What were your impressions of Zachary (Donohue) as a director, and did you want to know a lot about the look of the film, since it unfolds with so many graphic overlays, etcetera?

MP: I did, I had a lot of questions for him about that. Because we were making a film that needed to seem super-real, I wanted to be able to visualize it from the outside. So I had tons of questions for them, because a lot of times I was acting to either a blank screen or some pre-recorded stuff with one of the other actors. So I needed to know visually what it was going to look like on the other side, in order to make what I was doing look real. It was challenging. (laughs) It’s also funny, because a lot of the things that you see is me actually acting to nobody. For some of it there were people reading lines off camera… but sometimes it was literally a blank screen. We actually did try and Skype for some of the other conversations, but we had such a bad connection that it didn’t work (laughs), which I know is really ironic. But I really enjoyed working with Zach — he had this definite vision, from the beginning. This was his baby, and so any questions I would go to him with he knew the answers. He knew exactly what he wanted to see but he was also so open to any of my ideas… even though we were working at such a fast pace. He was very supportive, and he knew how to also throw things out and think on the spot and come up with solutions when stuff didn’t work.

ShockYa: Are you a big Skype or web chat person in real life?

MP: Oh my God, no — no, no, no, no, no. I don’t know how to do anything with technology — it’s just not my thing, which I know is really funny. Getting on Twitter was hard enough, but if anything goes wrong on my laptop I don’t know how to fix it. I know how to send my email and maybe download a few things, and I Skype every now and again with my family, but even on my iPhone I don’t think I’ve ever used Facetime. I’ve never even used Siri.

ShockYa: Did you do any web-chat research before filming?

MP: I had never been on ChatR0ulette before I started the movie, and I went on it just to research it, and it creeped me out. I didn’t think I would be as creeped out as I was, because I thought, “Okay, I’m in my apartment and they’re in theirs, at the opposite end of the world, and I’m fully protected,” but some of these people were so weird and creepy.

ShockYa: How much nudity did you see?

MP: Oh, a lot, I saw a lot. But it wasn’t funny, it was gross — the look on these guys’ faces while they were just sitting there touching themselves was so disturbing that it just stayed with me. I remembered it while filming too, but it’s not a site that I ever want to go on again. I didn’t think I would feel as vulnerable as I did, but it was the way they looked at me through my screen.

ShockYa: What was some of the best or your favorite chat footage from within the film?

MP: Some of it was put together beforehand so that I had the videos to act off of — they would film them and then load them up onto the laptop and I would stealthily, secretly press play before we’d start the take, and then react to the videos. But there were a few bits here and there that they didn’t have and so Zach or someone would just try to explain to me what they were going for. I think the long-haired guy in a bikini doing some weird dancing was pretty funny.

ShockYa: But Elizabeth also skips the cute cat footage, which I think is 50 percent of what the Internet was created for.

ShockYa: As an actress, obviously you want your work to be both good and seen, but how hard do you live and die with the eventual release and commercial reception of a film?

MP: It’s hard, you have to let it go a bit, because there are so many things that do not see the light of die. When we were filming “The Den” I was trying to (block) out any thoughts that this could be something special. I always had it in the back of my mind but you never want to glide on that, you have to just say, “Hey, I did every single thing while on this movie that I could to make it the best thing I could,” and then walk away. But it is hard, because a lot of times you do some really good stuff and then can get worried that no one is ever going to see it. And then sometimes you’re like, “Oh God, I never thought that was going to see the light of day and now it is, and I’m going to go run and hide.” (laughs)

ShockYa: Wrapping up is the lightning round, in which I endeavor to ask you silly questions that you haven’t already been asked today — so how do you pronounce your name, and how would John Travolta have pronounced it at the Academy Awards?

MP: It’s Papa-leah, but maybe Travolta would have said Mee-laney Pah-laa-pooh-lu? (laughs) I mean, he couldn’t get away with just the hairplugs — he had to do something else.

ShockYa: You were in “Postal,” which of course begs the question — any good Uwe Boll stories?

MP: Oh God, what a funny guy. He really gets a kick out of himself, he doesn’t take himself too seriously. Okay, one day on set when we were filming I walked over to ask him a question and he has a double screen on his monitor, so the monitor below what we’re actually filming is his last movie, which he’s editing while filming the current one. (laughs) I’d actually never seen that before. That was pretty interesting.

ShockYa: Wow. I’ve interviewed him about six times, Melanie, and I hadn’t heard that before — this explains so much about his filmography, I think.

MP: (laughs) I really like Uwe Boll, I think he’s, umm, a funny guy, and just a really nice man.

ShockYa: I feel like he’s from an alternate universe — a movie character who just happens to have stepped out into the real world.

ShockYa: Finally, what’s next for you — are you working on stuff now, or what’s on deck for you?

MP: Next I’m going to be promoting a movie called “Extraterrestrial,” which is a very wild ride and premieres at the Tribeca Film Festival at the end of April. So I’m going to head to Tribeca and then I have a couple things possibly on the go right now, but all I can really say right now is that I have “Extraterrestrial,” which you should check out.

NOTE: In addition to its theatrical engagements beginning March 14, “The Den” is also available on various VOD platforms. 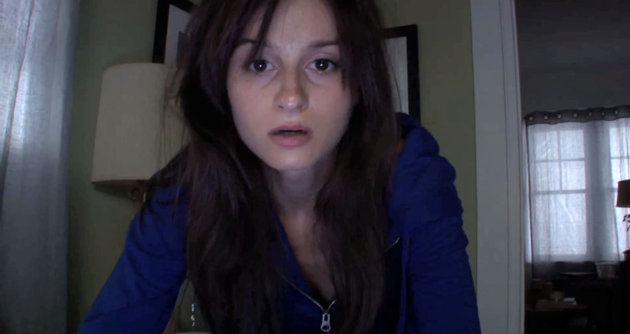