Frank is essentially a character with one sole, lifeless facial expression yet his journey comes with more vivacity, passion and poignancy than the large majority of performances that don’t require the actor to have a gigantic fake head covering his face.

“Frank” focuses on Domhnall Gleeson’s Jon, a cubical dwelling button pusher during the week and an aspiring musician in his free time. Jon’s passionate about his craft and does have ability; he just can’t seem to tap into it enough to produce a decent song. When Jon gets an impromptu opportunity to tag a long with an eccentric budding band called Soronprfbs – yeah, good luck with that one – he decides to take a chance and give it a go so hops in a van with a borderline mute drummer (Carla Azar), a French speaking guitarist (François Civil), a hotheaded theremin player (Maggie Gyllenhaal) and the band’s main man, Frank (Michael Fassbender), a lead singer who dons a giant fake head on stage, off stage, in the shower and quite literally everywhere else.

“Frank” is an odd one and sometimes offputtingly so, but director Lenny Abrahamson does manage to turn this band of extreme and bizarre misfits into a likeable crew because you do become invested in their effort to hit it big.

Gleeson is absolutely vital to the film’s success. Thanks to Daft Punk and the Gorillaz, having a lead singer of a band hide his face behind a mask (or cartoon character) isn’t particularly strange. In fact, it comes with a very marketable appeal. However, when it comes to light that Frank’s head isn’t just some shtick and you discover that he’s really a very troubled man who’s terrified to live without it, that’s when things start to get weird. Tack on the fact that every single other member of the band is moody, mute or totally erratic and you absolutely need an anchor like Jon to maintain a degree of appeal.

From the moment “Frank” begins, Gleeson strikes the perfect balance between selling Jon as your average Joe, but also as someone with a unique yet stifled creativity, too. By the time he comes face to face with the Soronprfbs, you’ve identified Jon as a relatable character, but also as one with this bottled up ability that’s about to explode. One may look at the members of Soronprfbs, think they’re nuts and dub anyone who invests in them equally insane, but thanks to highly effective early character development, it simply makes sense that Jon would be swayed by the opportunity to join this outrageous crew of characters and take the biggest risk of his life.

As for the rest of the gang, it should come as no surprise that the most influential of the bunch is Frank. He’s a fascinating player to track. One minute, he comes off as a genius for giving his band a noteworthy shtick, the next, you think he’s off his mind, but then, all of a sudden, you catch yourself admiring him just as much as his band mates do. In fact, about midway through, there’s a good chance you’ll throw all of your inhibitions out the window and look at Frank as though he’s the sanest member of the bunch. Frank’s arc in this movie is a true rollercoaster. Even though you’re aware that he once was in a mental facility, Abrahamson makes it so easy to believe in Frank’s dream of creating great music that you’ll root for him, but in an instant, Abrahamson has him do a complete turnaround, hitting the viewer with the harsh reality of his situation.

Of the remaining members, Gyllenhaal makes the biggest impression, but it’s only because she’s got far more dialogue than the rest of the bunch. It’s quite clear that Clara isn’t particularly stable herself, but in her case, that comes through via outrage and flat-out mean behavior. It’s not funny, it’s not moving and it’s often disturbing. None of the supporting characters get much backstory, but in Clara’s case, she needed it. Perhaps if we knew why she was so distrusting and vindictive, it would have made her outbursts easier to digest.

There are a number of questions in “Frank” that go unanswered, namely why suicide is such an issue amongst the group, but the stride of the overarching plot is captivating enough to carry you through. Clearly there’s a lot of music in this movie, but not in the way you might expect. The band never actually gets up on stage to perform a complete song. The singing, piano-playing, teremin tones and wealth of bizarre sounds coming from random objects are just all over the place. The music in “Frank” has no organizing principle because the music is just part of the characters’ everyday lives and that gives the experience a really unique and catchy beat. 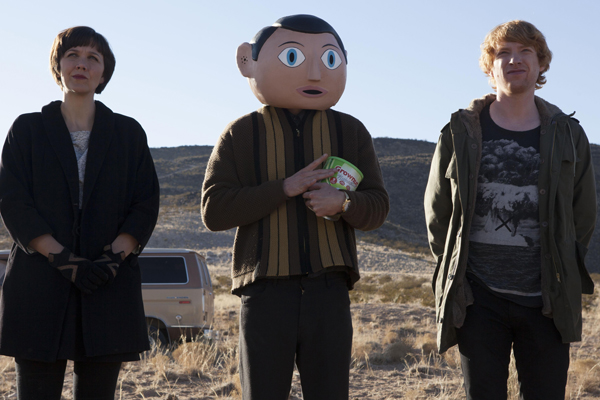