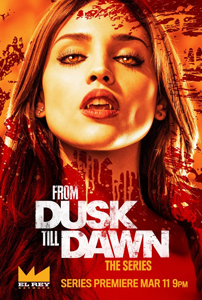 Who’s ready to go back to the Titty Twister? You’ll have to wait a few episodes to get there, but tonight at 9pm on El Rey Network, you can start the journey with the Gecko brothers as they evade the Texas Rangers, and start to make their way down to Mexico in the very first episode of “From Dusk Till Dawn: The Series.” Eighteen years after the release of the original film, Robert Rodriguez is ready to unveil this new rendition featuring D.J. Cotrona in George Clooney’s role, Seth Gecko, and Zane Holtz taking over for Quentin Tarantino to play Seth’s brother, Richie Gecko. We’ve also got Wilmer Valderrama in the mix as a crime lord with some serious bite and Eiza Gonzalez stepping in for Salma Hayek to portray the notorious Santánico Pandemonium.

With “From Dusk Till Dawn” gearing up for its Tuesday, March 11 debut, Cotrona, Holtz, Valderrama and Gonzalez all sat down to discuss what it took to lock in their roles, bring what we love about the 1996 release back again and also ensure the show stands on its on. Hear about the group’s memories of watching the original film, what it’s like with show writer, director and executive producer Robert Rodriguez having eyes on everything – literally, everything – the potential for the story to continue for many season, and more in the video interview below.