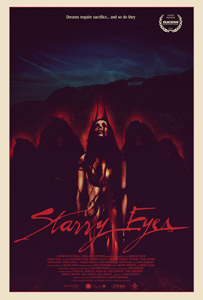 Everyone’s got something to fight for. Whether it’s ensuring the wellbeing of a loved one, being financially sound or furthering one’s career, there’s always something that feels like the be-all, end-all. Now, the question is, what if you’ve taken the noble, go-getter approach for years, aren’t seeing any results and then run into an opportunity where you finally could achieve your dreams, but at the expense of your morals? The SXSW Midnight selection, “Starry Eyes,” may influence your answer to that question.

Alex Essoe leads as Sarah, a budding actress trying to hit it big in Los Angeles. She slaves away at a fast food restaurant all day and goes on as many casting calls as possible in her free time, but she still isn’t getting anywhere. Despite all of her hard work and passion, it seems as though her friends are making more moves than she is and she just can’t take it anymore. When Sarah finally manages to land the lead role in a feature film that could be her big break, she jump at the opportunity even though the gig requires her to make some major moral, mental and even physical changes.

With “Starry Eyes” making its world premiere at SXSW 2014, a portion of the group responsible for creating this nightmarish fight for stardom came down to Austin, Texas to discuss making the film. We got the opportunity to sit down with Essoe, her co-star Pat Healy, producer Travis Stevens, and co-writers and co-directors Dennis Widmyer and Kevin Kolsch. Catch what the gang had to say about the power of the narrative’s metaphor, the ambitious makeup design, their own personal outrageous audition stories, and loads more in the video interview below.