When you’re watching an edge of your seat, racing film like “Need For Speed,” your first impression of the film is molded by the hero. What truly motivates the hero isn’t anything that he did, but what the villain did in order to crush him. It’s easy to figure out who the antagonist is – just look at his all-black wardrobe – but actor Dominic Cooper’s slick interpretation of the character is the kind of villain that’s fun to hate. 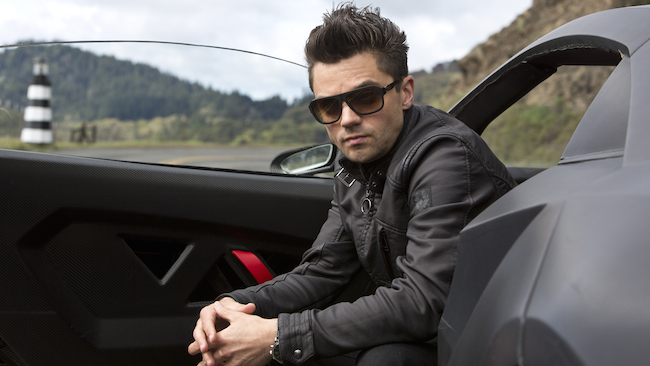 Dominic Cooper didn’t just climb onboard “Need For Speed” because of the character, but a number of other reasons that includes getting behind the wheel of some fantastic sports cars. I recently got the chance to speak with Dominic Cooper about learning how to speed down the freeway in the attractive cars, working with the director and the latest on “Warcraft.”

I heard about the training process, and you’re with the best people and you’re driving these sweet, sweet cars.

Dominic Cooper: The training was really fun, but it became kind of apparent rather quickly that there’s no way they’re going to let a bunch of actors drive at those speeds, racing really. They worked out ways to shoot us so we looked… and it was just scary, actually driving, and some of the scenes we are driving, but a lot of the big races were being driven by a mad ex-stunt man/racing driver from a cage above your head going at those speeds, which is quite possibly one of the most terrifying things that I had to do. But getting to actually drive that mustang around the race track, there’s nothing quite as fun. I loved every bit of it.

Dominic Cooper: it’s just like racing, which is great, cause that’s what you’re doing. That’s what anyone who would be experiencing driving at those speeds. It’s funny when you do, when you do dream of doing it, and you do think that you’re capable of this, it’s a very… they’re on the edge the whole time. They’re on the edge of catastrophe. One move, one false move and it’s all over.

It’s amusing to see that your character is screaming villain, just by the way he dresses. He shows up and he’s wearing black leather coat, black turtleneck, black jeans.

Dominic Cooper: I know, it is a bit like that. I don’t really know… because it’s a different world, I grew up with Formula 1 racing drivers. So Scott [Waugh], our director, knew those guys and knew what kind of a person he was and knew the background in which he came from. It’s that horrible arrogance and that desperate need to win and that envy of anyone being any better, and that’s where the idea of him originated, and the fact that he’s got this business… When you go, when you play a villain like that, you’re aware that they’re there to elevate your hero of the film, to really heighten the revenge aspect. So all you can do, in some way, and you’re also aware, even though you can’t play this and you shouldn’t really think about it, but you’re aware within 15 minutes of the movie, people know that you’re capable of the most outrageous, horrible act any human can do. Therefore there’s no way of clawing yourself back into anyone’s good books. So every single scene you have to try and work out a way, I suppose, to be in some way sympathetic, or at least work out a way or reason why you behave, why that character does what he does and why he’s capable of doing what he does. It makes for really good fun.

So you’re basically trying to convince yourself okay, this is why I still like this character.

Dominic Cooper: You don’t really like him, but there’s always a reason. The reason is he’s sworn to… for example, he’s sworn to his father that he’ll make this company work no matter what, so therefore he’ll go to any lengths to convince a friend to build this machine that he knows he’s capable of, but if anything goes wrong, he’ll take out anyone that could possibly prohibit him from doing that. It doesn’t make for a very nice person but there certainly are people that are capable of that, and much worse. All because I wouldn’t dream of anything like that or I know very few people, I hope, that are capable of doing anything like that. They do exist, and they will get to great lengths, and they’re envious of people who are naturally more talented than them. There’s a heightened aspect to it, because we’re dealing with a video game and we’re dealing with high performance sports cars that are really at the fore front of what this movie is, so we have to embed it in some kind of reality, but at the same heighten it, to equal those huge races and the phenomenal sensation people should be getting from high-octane, massive stunts and crashes. 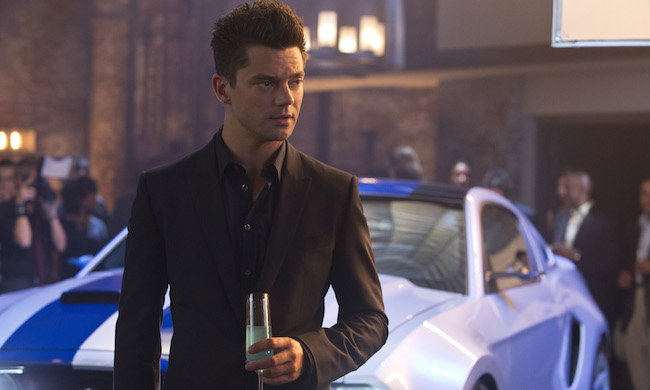 What was it like working on the film with Scott Waugh, a man who does have quite the background in the world of stunt driving?

Dominic Cooper: Yea, he was amazing. I’ve never seen anyone command a set so well in terms of how much support he had from the crew and the other stunt men, because they knew he understood their world really clearly, and he actually, what he always did at the beginning of every day was explain to everyone is what he needed from everyone and what they needed to achieve, which was sometimes really, really complex stunts and set pieces. It can never be re-iterated enough how important that makes people feel, to realize that they’re being acknowledged for what they’re doing. Everyone has a purpose and it can only be, those goals can only be achieved with the help of everyone. Every day he got everyone together and explained what that day was going to involve, and I really admired that. It sounds so simple but I can’t tell you how unbelievably rare that is.

Well it’s nice watching “Need For Speed” and seeing all these real stunts and cars getting torn apart, because you see so much CG out there now and it’s so obviously fake, almost to the point where it’s embarrassing to see.

Dominic Cooper: I know. I get pulled out majority from my enjoyment of the film as soon as I realize that the CG, however wonderful… Films like “Gravity” are just superb because it can work so, so well, and you never are removed, but when something explodes or an actual crash itself, I don’t quite believe it. These cars are really hitting each other at speeds and were really being thrown into the air and spinning around, and it made a difference. The fact that Scott would always talk about going back to the 70s and recreate, or make the stunts and make the racing feel how he remembered it felt when he was growing up, which his dad was also involved in too, so it was exciting to be a part of that. And then you realize as well that you miss that. You grow up and you think there’s something about the way that car moved, or seeing it, you were immersed in it. You really believed in it. You really felt it. The roar of the engine, everything was done so well in this, that you really believe that you’re there amongst those cars.

And wishing you could drive those cars, but probably not at the speeds they do…

Dominic Cooper: No, definitely not. We did get the chance to do it, we got the chance to go off in the Mustangs and take them around the tracks, but it was naive to ever believe that we would be allowed to actually race, three of us in a row, in three 2 million dollar cars. It’s never going to happen. I’d do it the whole time. I was constantly asking to take one of the cars around the track. And I had the opportunity to have an expert race car driver to also take you around the track, it’s completely thrilling.

Now we don’t have way too many epic fantasy films out there nowadays, and the fact that they’re transforming “Warcraft” into a movie is thrilling to see. What’s it like working on that film and is there anything you can tell us about it?

Dominic Cooper: It’s very exciting. I feel very privileged to be a part of it. They don’t want me discussing anything about it. It’s been great being there and watching the creators of the game, who are there overseeing stuff, and who are completely mesmerized seeing the world, that’s been in their brains for the past however many years, to suddenly see it start coming to life. Duncan Jones is incredible and you couldn’t think of anyone you’d want more directing this epic, massive great piece of work. Yes, it’s huge and very exciting.

“Need For Speed” is out in theaters now.