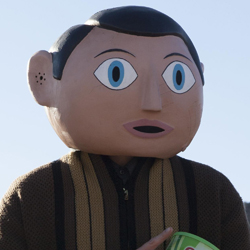 It’s tough enough directing an actor and capturing his or her performance in a traditional sense, but in “Frank,” director Lenny Abrahamson had the challenge of conveying the thoughts and emotions of a character that covers his face with a giant, papier-mâché head from beginning to end.

Domhnall Gleeson leads “Frank” as Jon, a guy who’s stuck in a cubicle on a daily basis, but pursues his dream of becoming a musician every free second he gets. When Jon crosses paths with the Soronprfbs and gets the chance to join the band, he jumps at the opportunity, hops in their van and cozies up next to their lead singer, Frank (Michael Fassbender), a guy who prefers to wear a papier-mâché head on stage, in the shower and even to bed.

Shortly after making its world premiere at Sundance, “Frank” went down to Austin, Texas for a run at SXSW. Abrahamson was in town for the event and took the time to sit down and run through the challenges of making a movie involving a main character donning a fake head. It’s nowhere near as simple as plopping the thing on Fassbender’s head and letting him take it from there. Abrahamson had to find the appropriate design dimensions to best suit his frames, pinpoint just one especially telling facial expression and develop a Frank-specific shot selection, and that’s all before he even hit the set. Hear about all of that, the challenge of accessing the character, ensuring the rest of his cast could connect to Frank and loads more straight from Abrahamson in the video interview below.