Uncover dark forces and unspeakable evil in a new, chilling trailer for the upcoming film, ‘The Quiet Ones.’ Lionsgate and the legendary house of horror, Hammer Films, have unveiled the new trailer, featuring stars Sam Claflin, Jared Harris and Olivia Cooke.

Lionsgate and Hammer Films are set to release ‘The Quiet One’ on April 25 in theaters nationwide. It also stars Erin Richards and Rory Fleck-Bryne.

‘The Quiet Ones,’ which is inspired by actual events, comes from Tobin Armbrust, the producer of ‘Let Me In’ and ‘The Woman in Black.’ ‘Quarantine 2: Terminal’ helmer John Pogue directed ‘The Quiet Ones,’ as well as co-wrote the script with ‘The Uninvited’ scribe Craig Rosenberg and ‘The Messenger’ writer-director Oren Moverman.

The horror moive, which is set in an estate outside of London, follows Professor Coupland (Harris) and a team of university students who are conducting an experiment on Jane Harper (Cooke). She is a disturbed young girl who harbors unspeakable secrets.

The mystery of what’s haunting Jane will take the group on an unnverving journey of a more territying evil than any of them expected. After beginning their experiements, the students and professor soon realize they’ve uncovered powers more astonishing than they’d ever imagined.

For more information on ‘The Quiet Ones,’ visit the horror film’s official website, as well as its Facebook and Twitter pages. Watch the new trailer for the movie below. 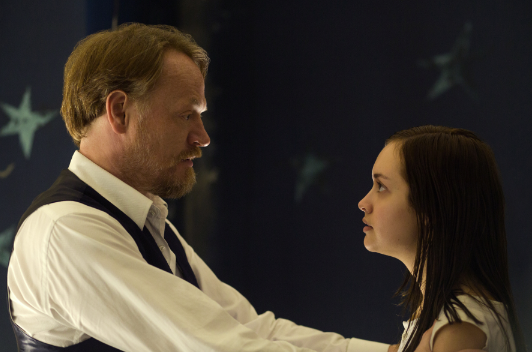