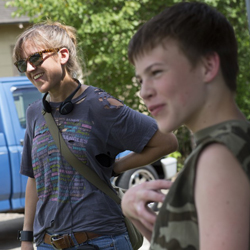 Whereas some filmmakers begin with short films, make their first feature and never turn back, Kat Candler has chosen to maintain a balance between the two formats and for good reason, too. As she explained, “I’ve learned probably the most from doing short films and I’ve developed my voice the most through doing short films, not through features.” And after seeing her latest feature, “Hellion,” you’ll absolutely take her word for it.

The story centers on Jacob (Josh Wiggins), a 13-year-old living in Southeast Texas with his little brother Wes (Deke Garner) and their father Hollis (Aaron Paul). Even though Hollis loves his sons dearly, he’s still feeling the effects of his wife’s passing and has a tendency to drink one too many when he should be looking out for the boys. Jacob has a habit of getting into a fair amount of trouble himself. However, a quick fistfight can’t compare to the lengths he goes to when the authorities decide their situation at home has gotten so out of hand that Wes needs to live with his Aunt Pam (Juliette Lewis) instead. Splitting the family up is not an option and Jacob is determined to do whatever it takes to get his brother back.

Just after a strong world premiere at the Sundance Film Festival, “Hellion” made its way to SXSW and Candler herself was on hand for the event. During the film’s SXSW run, Candler sat down to talk about bringing “Hellion” from short to feature, her experience taking it through the Sundance Creative Producing Lab, directing her young stars in the more emotionally taxing material, how her University of Texas at Austin students lent a hand and so much more. You can catch it all straight from Candler herself in the video interview below and do keep an eye out for “Hellion,” which is expected to hit theaters and VOD later this year via Sundance Selects.