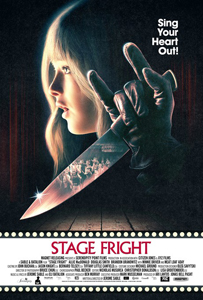 A horror musical? Really? Yes! And if you’re as skeptical as I was about the combination just before walking into my SXSW screening of “Stage Fright,” you better throw all that apprehension out the window because not only is the film quite good, but it was one of the most enjoyable experiences I had the entire festival.

The film stars Allie MacDonald as Camilla Swanson. Back when she was a kid, her mother (Minnie Driver) was murdered while in the midst of a run leading the Broadway show, “Haunting of the Opera.” Years later, Camilla still dreams of following in her mother’s footsteps (minus the untimely demise), but the problem is, she’s stuck working in the kitchen at a musical theater camp. When it’s announced that the big summer production will be a rendition of “Haunting of the Opera,” Camilla sees it as a sign. She sneaks into the audition, lands the lead, and readies herself for her big break. Now if only a deranged killer would stop picking off the cast so Camilla and her co-stars can make it through the production alive.

While at SXSW for “Stage Fright’s” world premiere, writer-director Jerome Sable and composer Eli Batalion sat down to talk about the process of going from their hit short film, “The Legend of Beaver Dam,” to their first feature. The duo touches on finding their leads, locking in younger performers for the supporting roles, housing the large majority of the company right on their camp set, recording most of their audio during production, and much more. You can catch all the details for yourself in the video interview below and be sure to check out “Stage Fright” when it gets a limited release via Magnolia on May 9, 2014.