When you’ve got Darren Aronofsky bringing a Biblical tale to screen, expectations are through the roof. “Noah” may not meet those expectations, but the film does nestle in just a few notches below. It isn’t a mind-blowing epic, but it’s certainly a riveting and worthy retelling of this story.

The film kicks off with a partial recap of creation, specifically what went down with Adam and Eve, and what became of their children, Cain, Abel and Seth. From there we cut to one of Seth’s descendant’s, Noah (Dakota Goyo), who’s just a boy at the time, but watches his father murdered right before his eyes. Years later, Noah (Russell Crowe) has a wife, Naameh (Jennifer Connelly), and three boys of his own, Shem, Ham and Japheth. After having a vision of man’s demise, Noah sets out to save the innocent – the animals – with the help of his family and The Watchers while Tubal-cain (Ray Winstone) and his followers threaten to claim their work, the ark.

As someone with limited knowledge of scripture, Aronofsky had a significant amount of breathing room with this and he didn’t let an inch of it go to waste. Whereas early memories of Noah’s ark involve a lecture or pages in a book, Aronofsky’s take is cinematic through and through. The performances are bold and engaging, most visuals are downright stunning, and they’re both featured within the context of an enthralling narrative. However, even though Aronofsky does deliver a worthy big screen Bible story, by going big in certain respects, he is forced to tiptoe around a number of potential pitfalls.

It’s important to note that these missteps are polarizing. “Noah” is a very good film, but, for example, for those who are well schooled in the Biblical telling of this story, Aronofsky’s deviations may be tough to digest. Even as someone without a thorough understanding of the source material, it’s impossible to overlook the fact that Aronofsky turned The Watchers into giant rock people. Yes, rock people. Initially, these Transformer-like creatures that sound as though they could be voiced by Liam Neeson, or even Peter Cullen himself, feel as though they came from a completely different movie – and genre – but not only does Aronofsky eventually go on to integrate them into the narrative well enough to make them feel like a natural part of this world, but he also adds backstory and character features that make them one of the most curious and enjoyable parts of the film.

Yet another piece of this production that could go one of two ways is the cast. There isn’t a single poor performance in “Noah.” Whereas the first half of the film is about building the ark, the second half focuses on Noah’s belief that they were meant to save the innocents, as in the animals, not themselves. That scenario elicits beautifully disturbing work from Crowe, striking heartfelt pleas from Connelly and also some of Emma Watson’s best work yet. If you’re still stuck in “Harry Potter” mode, there’s no doubt her performance in the second half of this film will pull you out of it and prove she’s one of the best of the best. She steps in as Ila, a young woman who was orphaned as a child, adopted by Noah and Naameh, and ultimately grows up to fall in love with their eldest son, Shem (Douglas Booth). Watson delivers an explosive display of emotion towards the tail end of the film that makes it absolutely impossible not to feel for her character.

Again, every single performance in “Noah” is spot-on, which makes this issue particularly difficult to convey. Even though you believe Crowe as Noah, Connelly as Naameh and so on, it’s still tough to disconnect from the fact that it’s Russell Crowe, Jennifer Connelly and so on, acting out a Biblical tale. It never takes you out of the film completely, but the thought does flicker throughout, catching your attention every so often.

On the technical front, “Noah” boasts a slew of gorgeous frames, many of which are filled with digital effects. However, there is a handful that does not successfully blend the digital with the practical, making certain CGI components of the film stand out in all the wrong ways. Some set extensions bear an out-of-this-world quality, mostly due to unnaturally bright coloring, and then there are a number of creatures that just aren’t quite right – and it’s not even the rock creatures. They get away with their supernatural feel because they really are supernatural, but, when you’re dealing with very real, familiar species, if they don’t look authentic, people will notice. The designs are adequate, but they’re just not quite real enough and when certain animals assume the spotlight, it is distracting.

“Noah” has its glitches, but every single one of them stems from the fact that Aronofsky took a risk and tried to put his own spin on a very familiar, Biblical tale. You will likely be able to spot many of them and some run the risk of pulling you out of the film, but not a single one drags a scene below a certain standard. The large majority of the components of “Noah” reflect highly skillful filmmaking. The problem is, when so many moments are truly breathtaking, the ones that aren’t tend to stand out. They aren’t poorly executed ideas nor do they fall below an average, but, in the company of such high quality moments, it’s impossible not to recognize that they’re there. 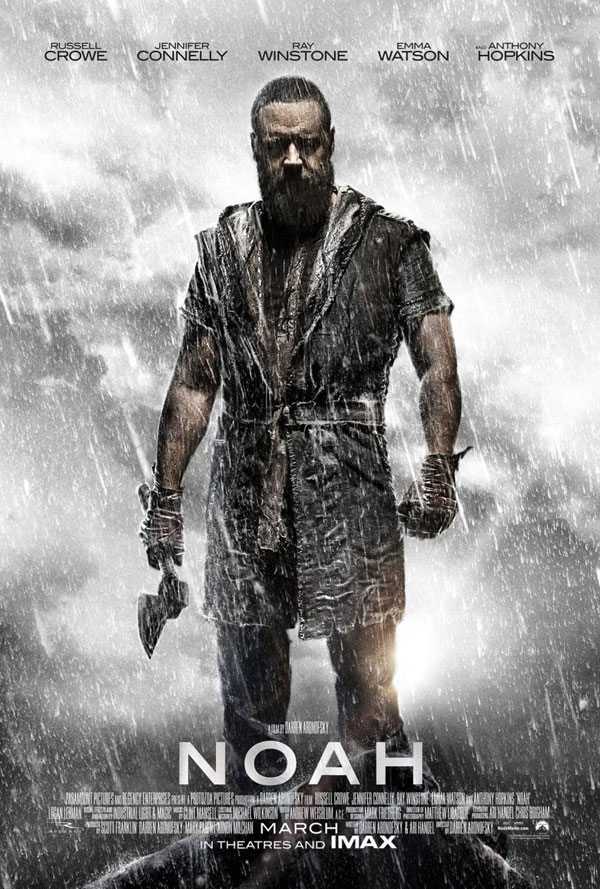