The most frightening and influential moments and inspirations can often come from the most unexpected and surprising places, and once they’re uncovered, they can leave both lasting and positive effects. Not only do the two main characters in the new horror film, ‘Oculus,’ have differing opinions about whether a malevolent spirit drastically altered their lives by causing their parents’ brutal deaths, but director Mike Flanagan also created a career-defining work with the movie. The helmer, who also co-wrote the script with Jeff Howard, smartly focused the story on the emotional havoc the purported spirit had on the siblings, instead of featuring unfulfilling, predictable special effects that are often associated with ghost stories.

‘Oculus’ follows Kaylie Russell (Karen Gillan), a young woman in her early 20s who’s preparing to reunite with her younger brother, Tim (Brenton Thwaites), upon his release from a psychiatric institution. As a teenager, Tim was convicted of the brutal murders of their parents, but the court feels he has repented and can successfully transition back into society. Tim wants to move on with his life, but his older sister doesn’t understand his rationalizations and explanations over what actually happened the night their parents, Marie (Katee Sackhoff) and Alan (Rory Cochrane), were killed.

Kaylie, who works in selling antiques with her fiancé, Michael (James Lafferty), has secured the Lasser Glass, a mirror that Alan hung in the Russells’ home. She’s convinced her parents’ deaths were caused by a malevolent supernatural force that resides in the mirror. So she convinces Tim to return to their childhood home, where she has set up cameras to capture proof that the spirit is indeed in the mirror, for the first time since the murders. Kaylie cites mysterious deaths that have befallen on previous owners of the mirror, in an effort to prove Tim’s innocence. But the two soon lose their grip on reality by experiencing hallucinations and memories of their childhood moments that led to the murders, and realize too late that their adolescent nightmare is beginning again.

Flanagan and Howard crafted a tense, perplexing horror film that powerfully played on Kaylie and Tim’s distinct, but equally terrified, emotions, both as teenagers and adults. Instead of relying on a translucent, unoriginal spirit with a haplessly crafted history and motive to drive the story forward, the two writers smartly infused ‘Oculus’ with a terrifying mystery of not only what the spirit wanted from the siblings, but also if there was even a spirit at all.

Kaylie was captivatingly portrayed by Gillan as a seemingly well-adjusted young woman, who was thriving in her career and relationship with Michael, but was really still tormented by the perplexing murders of her parents. She refused to let go of both her youthful belief that the Lasser Glass was responsible for their deaths, and her determination to destroy the mirror before it could hurt another family. Tim, who spent most of his adolescence in an institution, was the surprisingly rational sibling, who didn’t want to hold someone, or something, else responsible for his actions before his parents’ deaths. Thwaites effectively played the transitioning Tim as the unexpected, but much needed, voice of reason, questioning whether his sister has truly thought her plan of antagonizing the mirror through.

The continuous use of flashbacks to Kaylie and Tim’s childhoods was a chilling, enthralling and much-needed inclusion to ‘Oculus’ storyline. While the continuous use of memories in narratives can often slow down and hinder the full development of both the characters and plot in many films, Flanagan’s creative inclusion of Kaylie and Tim’s memories of the time right before their parents died truly helped progress the plot. The scenes from the siblings’ childhoods emphasized the take-charge attitude Kaylie developed as she struggled to protect herself and her brother from the rapid deterioration of Marie and Alan’s emotions, actions and bodies. Having fully witnessed the complete change in her parents’ attitudes after her father bought the Lasser Glass, Kaylie adamantly maintained her belief the mirror’s spiritual possession completely changed them.

Tim, meanwhile, had 10 years to ponder and reflect on what really happened in the days before his parents’ deaths while he was institutionalized, and became the unexpected voice of reason of the film. The flashbacks cleverly chronicled how Kaylie often protected her brother from witnessing their parents’ arguments and unhinged behavior. That shield guarded Tim from seeing their mother’s descent into launching increasingly feral, savage attacks on her husband, who became increasingly hostile and brutal to anyone who got in his way of defending himself. So Tim understandably accepted the fact that he shot their father during Alan’s momentary lapse of judgment towards his family, as opposed to being possessed by the mirror’s spirit.

Flanagan smartly rejected filling ‘Oculus’ with a menial, unoriginal CGI-created spirit and predictable effects to frighten audiences. While the writer created a somewhat simplistic story about the physical and emotional effects an unseen spirit has on a family, the filmmaker imaginatively infused the film with innovative emotional scares that come with the subtle infusion of such a spirit, in the vein of ‘The Exorcist.’ With the aid of the properly used and beneficial flashbacks that actually aided in the characters’ development and differing opinions of what really caused Marie and Alan’s deaths, and the surprising role reversal of the two siblings’ thoughts on the Lasser Glass’ influence on them, ‘Oculus’ is a smartly crafted and unique horror film that values emotional shocks over physical scares. 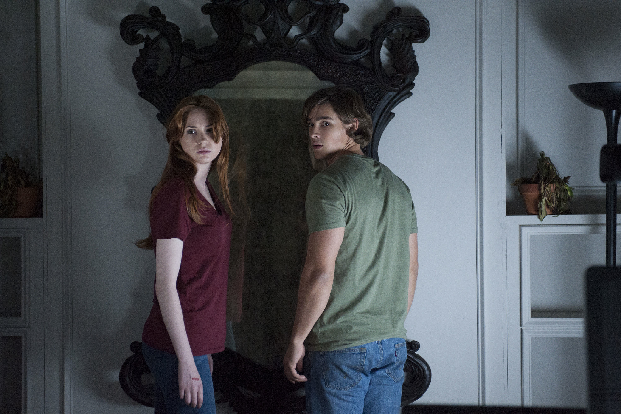