In the Blood Movie Review

Title: In the Blood

If we’re keeping tabs on the evolving filmography of ex-mixed martial arts fighter and future “The Expendabelles” centerpiece Gina Carano, “In the Blood,” from director John Stockwell, slots considerably below “Haywire,” her at once lithe and bruising collaboration with Stephen Soderbergh. And yet there’s still a certain ramshackle appeal to the film, a starchy, “Taken”-meets-“Turistas” revenge picture which could just as easily be titled “Woman on Fire.”

“In the Blood” centers around Ava (Carano) and Derek Grant (Cam Gigandet), a newly married couple who head to the Caribbean on their honeymoon. There, they’re befriended by a local hustler, Manny (Ismael Cruz Cordova), who talks them into going to a dance club and, later, zip-lining. After an awful accident during the latter excursion, Derek is taken by ambulance to the hospital. Ava, however, isn’t permitted to ride with him, and when she shows up looking for her husband, he’s not only nowhere to be found, but hospital administrators claim he was never admitted. Manny seemingly can’t be found either.

Understandably bewildered, Ava presses the issue with authorities, which puts her at odds with squirrelly police chief Ramon Garza (Luis Guzman), who at first implies and then outright accuses Ava of having something to do herself with her husband’s appearance. Ava’s knotty search for the truth, despite increasingly dim prospects, finds her crossing paths with any number of unsavory characters, including but not limited to Silvio Lugo (Amaury Nolasco) and Big Biz (Danny Trejo).

Despite its eventual twist or explanation (there’s a double entendre of sorts in the title), “In the Blood” is less a true mystery than a kind of stalking horse conspiratorial knuckle-duster in which Ava makes use of a remorseful henchman, spurious coincidence, brute force and some dumb luck to bleed nuggets of information out of various folks until there’s a climax. The script, by James Robert Johnston and Bennett Yellin, makes the awkward and unusual choice of having Derek and Ava bound together by rehab (because we know that always works), but then compounds that by not having any flashbacks to their first meeting, or any pivot point(s) in their relationship. We see scenes of Ava’s hard-knock childhood (Stephen Lang plays her father, who apparently taught her all her physical combat), but there’s nothing to buoy and bolster the Ava-Derek relationship, which is problematic, given that the movie invests so much time in reunification and vengeance. There’s also the matter of a batshit-crazy ending, which manages to summon forth an unexpected and uncomfortable queasiness that stands separate and distinct from anything much having to do with the narrative proper.

Carano remains a work in progress as an actress, but has an undeniable screen presence. She’s obviously gifted with the physical stuff in action scenes, but also has a charm that works well in reactive situations. Soderbergh knew how to harness this in “Haywire,” for scenes of coiled danger, and there’s a sequence in “In the Blood” where a handcuffed Ava coaxes a police officer into escorting her to the bathroom, which we know won’t end well for him. Other times, however, since the film is so much in service of her as a proactive dispenser of pain unto others, “In the Blood” struggles to maintain a connection amidst its forward-leaning momentum.

Throughout it all, Stockwell works feverishly, cycling through a grab-bag collection of camera angles and styles (security camera footage… really?), especially in the movie’s fight scenes. One wishes he and his collaborators took more time to take a couple deep breaths, however, and maybe jettison a couple inessential supporting characters. A tighter focus and more of a sustained boil and lingering menace would serve this loopy tropical potboiler more than its violence.

NOTE: “In the Blood” opens in Los Angeles at the Burbank AMC 8, and in top markets across the nation. Additionally, the film is available across VOD platforms. 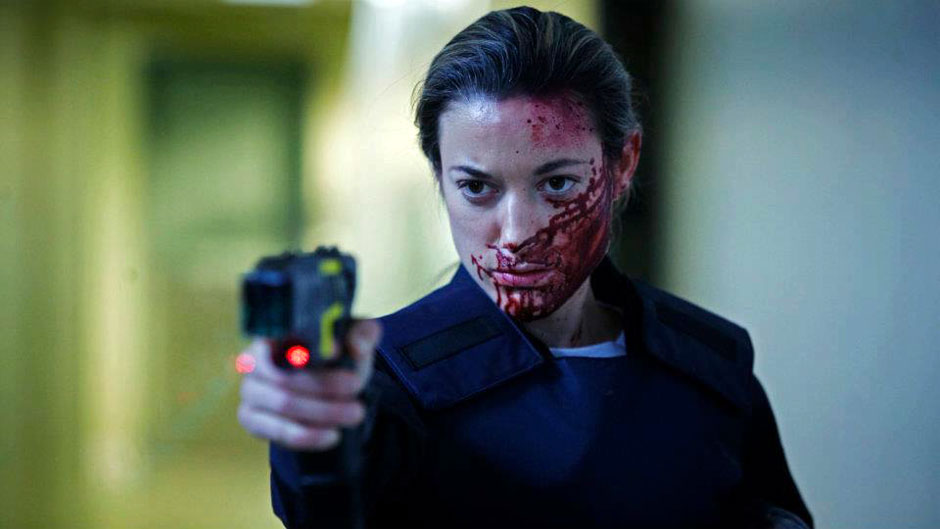