A Tony- and Oscar-nominated actress, Amy Ryan has played tough, tender, damagingly self-involved and everything in between. In real life, though, her persona runs closer to Holly Flax, the lovably good-natured if somewhat dorky romantic interest to Steve Carell’s Michael Scott on “The Office.” Ryan is self-effacing and peppers a conversation with laughter, but also all sorts of jokey tangential asides. In her latest film, writer-director Drake Doremus’ “Breathe In,” she plays Megan Reynolds, the wife of frustrated music instructor Keith (Guy Pearce), the latter of whom develops a slow crush on Sophie (Felicity Jones), an exchange student the couple takes into their upstate New York home. Brent Simon recently had a chance to speak to Ryan one-on-one for ShockYa, about the movie and Doremus’ unusual collaborative process, what sort of gifts she likes, and one of her fall projects, Alejandro Iñárritu’s “Birdman.” The conversation is excerpted below:

ShockYa: I’ve interviewed Drake a couple times before, but how familiar were you with his improvisational workshopping process prior to getting involved?

Amy Ryan: When I was involved the script was complete, at least in Drake’s way, in terms of it being a very strong outline, but we did the same thing that they did on “Like Crazy,” which was that before we started on set there was a big email campaign where every department was involved. So for example the costume designer would email me and ask, “Do you think your character has clothes that get dry-cleaned once a week?” And at first you’re like, “Huh? I don’t know.” (laughs) But then you take a minute and you start making stuff up, the story starts to evolve — like, she used to, but money got tight and now she hand-washes. You start building this world that at first feels like a lot of nothing information, but on the day when you’re improvising you have all that in the back of your mind. And the prop department was like, “The cake for Lauren’s birthday — did you bake it or buy it?” And I’m like, “Yes, I made it, her favorite is chocolate and has been since she was a little girl.” (laughs) It’s like school essays, and at first it’s all bullshit but then it pays off. And Guy and I emailed each other, too. At first I was like, “Dear Guy — I’m very excited to work with you, I think you’re a very talented actor. Yours, Amy” And then the third email back is like, “Love, Wifey-Poo” (laughs) Then Guy and I, we started Photoshopping each other into old photographs from 10 years ago, when our characters would have known each other. So we started having fun with it. And in some ways, that’s what you try to do with every film, to just flesh it out. But when you’re in a group conversation about it, it’s really full and fun.

ShockYa: I’m more familiar with that sort of homework in the world of theater, of building a character through writing assignments and the like. Had you anything comparable to that on a film?

AR: No, the most that I was involved where someone asked my opinion would be the costume department, like, “Are you allergic to wool?” Or just sharing what colors work well on you, or what your sizes are. But I’ve never been involved with an art or props department before, pre-production. (laughs) It was fun because it helped to really get to know the crew quite well.

ShockYa: There’s a slow-burning ambiguity to “Breathe In,” because Keith and Sophie’s chemistry is not immediately or even predominantly described as sexual, it’s more of an artistic vibe they share. Did Drake talk with the cast at all about creative longing that can serve as a libidinal trigger?

AR: He might have with Felicity and Guy, in their process, but what he spoke about with me, and what we wanted to convey — or at least Drake did in the beginning, until he got to the editing room, because… unfortunately some scenes were cut from the film — was that [Megan and Keith] had a pretty good relationship. They’re happy. It’s not just a horrible marriage where the wife is a badger and drives him into the arms of this beautiful young girl. We filmed scenes where they were fun and lighthearted and loving, giggling with one another in bed, listening to the girls. And a lot of that stuff got cut. But that intention was still there — that they do like each other, but they’ve kind of just grown apart a little bit. As they say, their kid came early and they moved out of the city and lost a little bit of their fight. But I don’t know if that comes across — you might be a better judge of that, having watched the film. …Someone I know, I forget who, but a friend who’s not in the film world, said, “Oh, you’re crazy — I took one look at that girl and I would have sent her right back on that plane.” (laughs) I know Drake wanted to make a tone poem and love story, and sometimes I think it’s also a poem about what happens when you don’t keep the lines of communication open. You’re just going through (the motions) and it’s kind of fine — you don’t fight — but these people don’t follow through on what makes them happy in a day.

ShockYa: We get a sense of Megan as an arts-and-crafts type. She collects cookie jars. Do you collect anything?

AR: No, I’m the complete opposite, I can’t wait to get rid of stuff! I always say if you want to buy me a present make sure I can read it, wear it or eat it. I think they even asked me at the end of the shoot if I wanted to take one of the cookie jars and I was like no. (laughs) I felt bad, because I broke some pretty valuable ones (in a scene). And that was fun, but I still felt bad.

ShockYa: What were your impressions of Guy and Felicity, and how did they jibe with what your might have thought of them going into the film?

AR: I’d never met either of them. I’d just known their work from films. They’re both so easygoing and such fun and easy people to work with. Felicity is so sweet and down-to-earth that it was actually hard to be disappointed in her, in her character. I’d love to work with them again, because they’re both the kind of actors that are there for the story.

ShockYa: You mentioned the phrase tone poem previously, which I think is an appropriate description. And it’s interesting, because [since] there isn’t a big scene of carnal consummation, I’ve talked with people who disagree about how far any affair has gone.

AR: My sense of it was that it didn’t go very far, but it’s crazy that Guy’s character would pack up and leave his daughter, who he has a really good relationship with — I think that’s probably the biggest stretch or question in the film, not that they didn’t consummate the physical relationship yet.

ShockYa: The film also makes passing mention of divorce parties, which are apparently an actual thing. Have you been to one in real life?

AR: Yeah, I actually told that story right before we started rolling! And Alex(andra Wentworth) was like, “That’s great!” and she threw it into the improv. I haven’t gone to one, but I had a friend who had, well, not really a divorce party, per se, but had a divorce where they gathered their best man and maid of honor and separated with love, and I thought that was like the coolest thing I’d ever heard of. It was a mutual separation, obviously — and they wanted to just send each other off and wish each other well.

ShockYa: How evolved — that’s like the “Star Trek” version of humanity’s future! You have a couple more interesting films coming up, including this fall’s “Birdman.” The premise sounds interesting enough as it is, but given that Alejandro Iñárritu is the director I’m even more fascinated. What is it like, tonally?

AR: Yeah, “Birdman” is wild. I think it’s very different from all his other films — it’s a dark comedy about a man (Michael Keaton) on the verge of a nervous breakdown. He’s having a mid-life crisis and re-evaluating life. He had great success as a film actor, and is trying to heal his soul. And then the unusual thing about the film, just in terms of the making of it, is that each scene would go in one take. So it was very, very choreographed, because on action you, the boom, the cameraman, the focus-puller, you’re all in it together and if the boom gets in the shot on the last line you all have to start over. Or if you bump into the camera like I did, you’re back at (square) one. So it’s pretty intense, but if definitely gives the movie a feeling of live theater. Most of the movie takes place in the theater (world), and it certainly captures the urgency of all of them together.

ShockYa: You came from that theater world as well. Not necessarily your career arc, but just your process — in the broadest sense, in terms of grounding or mooring — would it be the same if you had worked exclusively in film and television?

AR: I don’t think I would be. I think I really needed to learn that discipline, I needed to learn what it meant to be able to fill in the blanks about my character, or have an emotional arc or what an intention is — just learning about human behavior [since] I’ve sometimes come across directors who don’t have that vocabulary, who are maybe more technical directors. No matter what the techniques of the film are, you have to still convey being a human person with a storyline and wants and needs, and not just moods. So at least the training that I had in theater, and then the experiences I’ve had on stage where after that democratic rehearsal process, where you’re with the group and pushing forward the story together, and then you’re left on your own once the play opens, to continue that — I think if I didn’t have that I think it would just be piecemeal, cut-copy-and-paste a scene here and there. Not that other people in film don’t do that, but for me it’s just a great set of tools to have. 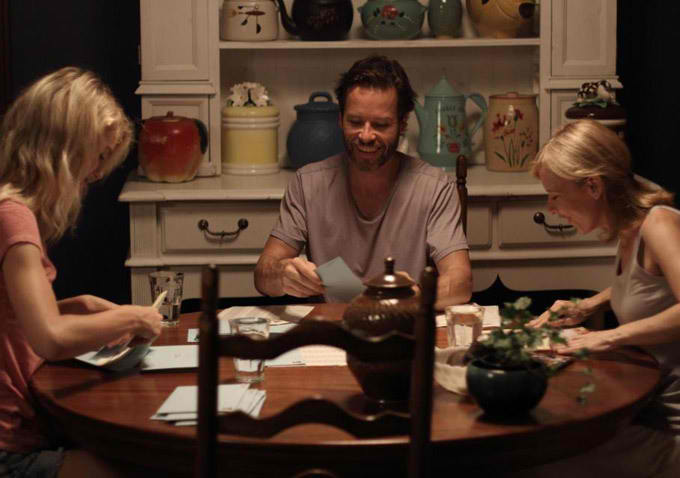