He’s not yet 40, but director David Gordon Green has successfully juggled an interesting collection of studio comedies like “Pineapple Express,” “The Sitter” and “Your Highness” with more esoteric and independent fare like “All the Real Girls” and “Prince Avalanche.” His 10th feature film, “Joe,” is an adaptation of Larry Brown’s novel of the same name, and stars 17-year-old Tye Sheridan as Gary Jones, an impressionable kid who, desperate for some adult guidance and attention, kinds an unlikely mentor in the form of Nicolas Cage’s ex-con title character. Brent Simon, for ShockYa, recently had a chance to speak to Green one-on-one, about the film, casting and working with non-professional actors, the keys to a good Terrence Malick impersonation and his next film, “Manglehorn.” The conversation is excerpted below:

ShockYa: This film gave you the opportunity to work with one of your film school professors from the North Carolina School of the Arts, Gary Hawkins, who adapted Larry Brown’s novel. How bizarre was that experience?

David Gordon Green: It was very comfortable, actually. He’d been a very inspiring professor of mine and introduced me to a lot of the filmmakers that I love, including Charles Burnett and Roman Polanski and Terrence Malick. Watching films with him in my very formative years was always a real enlightenment, and then I worked as a production assistant on a documentary he made about Larry Brown. That was awesome, watching him work, and then he introduced me to Larry and Larry’s work, so it really felt like a comfortable, full-circle family experience.

ShockYa: There are a lot of films, even some that are quite well regarded that may be characterized as Southern Gothic, that revel in their sense of apartness, and “Joe” doesn’t do that, to me — it tells a story about a distinct place, but doesn’t indulge in the separateness of that place.

DGG: Yeah, the novel takes place in Mississippi and I wanted to personalize it so I brought it to Texas, and I brought it to locations that were speaking to me in terms having a timeless, placeless, classical quality to [them]. I always looked at this movie as contemporary western, in a lot of ways, and I wanted to fuse the genre into it. It was part location selection and part art direction, just making it feel like it could be appropriate anywhere.

ShockYa: Do you feel it stands in tandem or concert with any other of your works? Portions of it certainly reminded me of “George Washington,” and then your last film, “Prince Avalanche” was also about a pair of men finding their way, broadly speaking.

DGG: Well, it fell into line with my discovery of Austin, Texas, really. When I was location scouting for “Avalanche” is when Nicolas came to town and we started digging around and talking about this. He was actually helping me look for locations for that movie, and that’s when we said, “Well, what’s down this way, around this corner? And look at this forest from the other side of the highway from the burnt forest.” We were kind of unconsciously putting “Joe” together. And then I went straight from “Joe” into “Manglehorn” (starring Al Pacino and Holly Hunter), which is another Austin-based film. So it was about getting to know the community, but also just the momentum of creativity in a place that I’d recently relocated.

ShockYa: Joe has an inner boil, and seems to turn all judgments against himself. What sort of suggestions and insights did Nicolas Cage have about the character?

DGG: There would be great things, like a scene from the novel that actually wasn’t in the script of Joe picking buckshot out of his shoulder. And Nicolas’ justification of putting that in the movie, which I thought was pretty brilliant, was, “Let’s see what that face of physical pain is like so we have it to reference when we see the face of emotional pain later in the movie.” He thought in those parallels and I thought that was brilliant. He also included a prop, this little Dupont lighter that made a very specific sound that he would sing to the props master. He said, “Let’s find this lighter,” and then in a scene in the movie he gifts it to the character of Gary Jones. And the scene where they’re looking for the dog, walking around? All that banter is just improvised, where he’s talking about how to make a cool face — he brought these elements of humanity and connection to the fore, somewhat humorous, of two guys getting to know each other.

ShockYa: “Big Bad Love” is the only adaptation of Larry Brown’s work. Given his stature in a certain creative community, why do you think there haven’t been more films made from his novels and stories?

DGG: A lot of it’s been optioned, and from time to time I’ve even read some stabs at adaptation of “Father and Son” and “Fay,” so he floats around. But a lot of it I think deals with difficult subject matter and isn’t necessarily driven or conducive to a movie star performance, or various other reasons that it becomes difficult to logistically produce a creative work. “Joe” falls into the category of if you have a movie star and a director at the right point in their careers, you can make a modest version of it. A lot of it is beautiful literature and will remain so, and I’m sure other people will take creative stabs at adaptations.

ShockYa: There’s a scene with Gary on the bridge where we see he’s not afraid to stand his ground. Why do you think he hasn’t yet done that, and stood up to his father (physically), especially since he has a younger sister he cares for — or is the movie basically about him arriving at that point?

DGG: I look to it as that — we actually amplified that scene somewhat from the novel, when he beats up the character of Willie Russell on the bridge, and that was to show that physicality, (to show) that he could do harm to a man significantly older and larger than him. We wanted to make sure that the audience knew Gary wasn’t some meek little kid, he’s a kid who has an emotional barrier between him and the biggest problem in his family. The reality of those situations is that’s very often difficult to stand up to his father in that light. And then by the end of the movie the kid is ready to take on that challenge, he’s prepared to do that emotionally. And once Joe recognizes that, the question becomes, at the climax of the movie, how does he respond?

ShockYa: Brown’s book was written, or published, I guess, in 1991, but it feels in part like an economic metaphor, tapping into the desperation of the unemployed or under-employed. Was that something you consciously increased, or is that just a reading that’s there in the novel if one wishes to see it that way?

DGG: I think both. It’s a matter of how you look at it politically or creatively. We’re not setting up these characters for judgment, necessarily — we’re trying to layer them with complications and conflict and things. We wanted to find an authenticity there but at the same time make a compelling narrative that does have certain genre elements. And whenever you turn a camera on a difficult situation you’re bringing conversation to the table. I like a movie like “Joe” because it does stir up conversation about poverty, it does about the human spirit and work ethic and alcoholism and domestic abuse — all those things. We [tried] to make a movie that would invite an audience into these stories and deal with brutality in a tender way, and unexpected ways as well.

ShockYa: You’ve worked with non-professional actors dating back to your earliest films, and blending them into a film with seasoned actors who have technique to fall back on is no easy task. Is there a special gift to casting non-professionals. Is it role-dependent?

DGG: Exactly — with a role that requires a sensitivity of, let’s say the Willie Russell character, who gets into a very sensitive situation with a young girl character, I would want a disciplined and skilled, trained actor to deal with that role. I would insist on that. Other times you just want to let it breathe and feel alive, and you’re ready to take the curious journey of where a certain character will lead you. I’m always looking for a performer that’s full of confidence or charisma, or is just a little bit crazy, and is ready to play in front of a camera — those are just things that invite me into their stories. I like to use filmmaking as a stage for that.

ShockYa: Tye Sheridan gives a very good performance in “Joe,” and his first film was “The Tree of Life.” I know Terrence Malick has had a big impact on you creatively, and Tye said that on the set of “Joe” you guys would sometimes trade in Malick impressions. And it struck me that that’s probably not a game that can be played on that many other movie sets.

DGG: (laughs, then affects a drawl) “Well, I do pretty good one!”

ShockYa: What’s the key to a good Malick impression, then — is it pure accent or tone, is it a specific niche academia?

DGG: “It’s a lightness in your Southern accent, and just a beautiful and supportive, reassuring voice.”

ShockYa: Nice. Now I desperately want to just break out a MP3 of that, and append it to this interview. Wrapping up, what’s the status of “Manglehorn”?

DGG: I’m just finishing up the edit on that right now, and I’m gonna shine that up and will hopefully have it ready later this year. I’m juggling a lot of things right now, so the beauty of making lower-budgeted movies is that there’s not the expectation of timing and release that a lot of those bigger-budget movies can have on their shoulders. So we’ll see, but I’m hopeful that we’ll have it in good shape before too long.

NOTE: “Joe” opens in theaters on April 11, and expands nationally throughout the month. It is also available across VOD platforms. 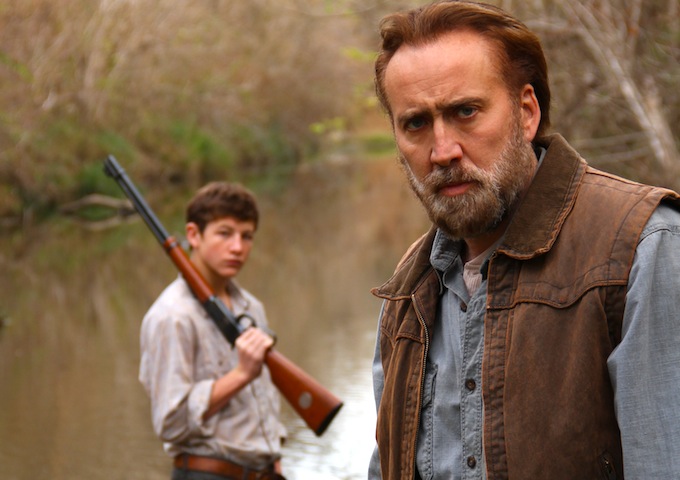