In her strikingly humane and thought-provoking debut feature, “Return,” writer-director Liza Johnson showed the ability to locate illuminating character details in all sorts of quiet moments. With her second film, “Hateship Loveship,” starring Kristen Wiig, Johnson again proves herself an astute chronicler of human frailty, even if the low-wattage hum of her lightly romantic drama eventually peters out, leaving the hull — more intriguing than emotionally satisfying — of an ensemble character piece.

Adapted by Mark Poirier from a 2001 short story by the late Alice Munro, the film centers on Johanna Parry (Wiig), an exceedingly mild-mannered live-in caregiver who in the wake of the death of her client, moves to a new town to work as a housekeeper for Bill McCauley (Nick Nolte). Bill’s granddaughter Sabitha (Hailee Steinfeld) lives with him, and has ever since his son-in-law, Ken Gaudette (Guy Pearce), went to prison following a tragic accident that claimed the life of Bill’s daughter and Sabitha’s mother.

After Ken pens Johanna a harmless thank-you note and Johanna responds in kind, Sabitha and her friend Edith (Sami Gayle) take advantage of Johanna’s naivete by posing in correspondence as Ken, fostering a pseudo-relationship between the pair. Ken is still in the grips of addiction, and has a casual girlfriend, Chloe (Jennifer Jason Leigh), who isn’t much good for him, but when Johanna makes a bold leap and acts on what she believes to be a signal from Ken, it elicits greater change for everyone involved.

Though there’s plenty of absorption herein, viewer interest in Wiig’s performance is the main selling point, obviously. Like fellow “Saturday Night Live” mate Will Ferrell before her, Wiig has a bit of a pensive streak that brings an interesting quality to downbeat characters. As Johanna, she’s a bit frumpy but not overly so. Her quiet mutterings may summon momentary knee-jerk recollections of her “SNL” character Penelope, the serial one-upper, but those dissipate quickly. Johanna, as rendered by Wiig in a fascinating bit of wallflower portraiture, is a woman who’s simply pressed “pause,” developmentally, in her life, and is surprised to learn she’s in possession of her own remote control.

If its set-up is evocative, where “Hateship Loveship” comes undone a bit is in its home stretch. The gender politics of the movie, in which Johanna happily dotes on Ken — and seemingly curbs if not quite outright cures his addiction issues simply by cleaning up after him, making him some home-cooked meals and not calling actively bullshit on what she knows to be his lies — will strike some as bizarre, or certainly retrograde. There are some nice scenes that tap into the aforementioned awoken-from-slumber quality (the movie plugs into Johanna’s burgeoning sexuality and appreciation of same in a simple and straightforward but altogether refreshing manner) yet “Hateship Loveship” also betrays Johnson’s gift with showing rather than telling. The more it tries to resolve, the less satisfying Johnson’s film becomes. I’d rather it ended sooner, from a narrative standpoint, or push forward even further to catharsis and wrapped-up loose ends, but the film feels like it settles in an uncomfortable middle ground, neither resolved or nor rewardingly ambiguous. 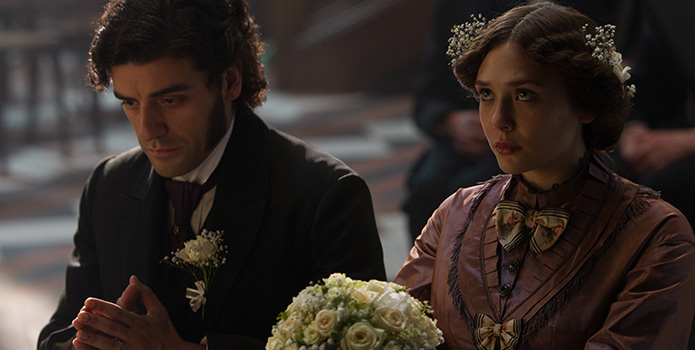