“Tasting Menu” might be compared by some to “Babette’s Feast,” Gabriel Axel’s film about a remote, 19th Century Danish community whose religious views forbid them to eat more than gruel but who are upended by a fantastic meal prepared by their French housekeeper. But Roger Gual’s movie does not center on food. That’s too bad. The menu of the title is from the best restaurant in Spain, a Barcelona eatery whose chef is holding court at a final dinner before she goes on to do something else with her life. One may wonder why people at the peaks of their careers would suddenly want to do something different and quit their old lives, but such is not explored by director Gual, using his own screenplay co-written by Javier Calvo. In fact, nothing much is being decided by a group of thirty diners who have had reservations—some made one year previously. You might have reservations yourself if you’re looking for a story that focuses on food (this does not, and in fact the shaky camera acts as though it’s ashamed of the output of the chefs). You might have reservations yourself if you think you’re in for a treat, a fly on the wall listening to at least some sentences that rise above the banal. There are none.

The characters who gather for the last supper, as it were, are representatives of personality quirks rather than fleshed out individuals. The leading couple, Marc (Jan Corner) and Rachel (Claudia Bassols) are a pediatrician and writer respectively, now divorced and showing up only because they reserved places at the table a year back while married. Rachel is being pursued by Daniel (Timothy Gibbs), a handsome but “Ugly American” who insults his waiter and is confident that Rachel will accept his ring. Walter (Stephen Rea) sits glum and alone, suspected of being a feared restaurant critic, while flibbertigibbet Mina (Marta Torne) plays host to a pair of inscrutable Japanese (Togo Igawa and Akihiko Serikawa), earning their contempt when she blows her nose at the table—not at all kosher in parts of the Far East.

The most irritating of all is the Countess (Fionnulla Flanagan), who takes an urn with her husband’s ashes to accompany her at the table and plays the hackneyed role of worldly-wise elderly woman, instructing Marc and Rachel that life is short and passing off what she considered the bon mots allegedly earned only by people in her age range.

Max (Andrew Tarbet), plays overall host, an actor who was born in America, is living in Barcelona, and speaks Spanish and English with absolute fluency, while Vicenta N’dongo (Mar Vidal) uses her skills as the best chef in Spain and one of the best in the world. Too bad Emilio Guirao, the cinematographer, does not have enough respect for the food to do more than shake his camera at the dishes. 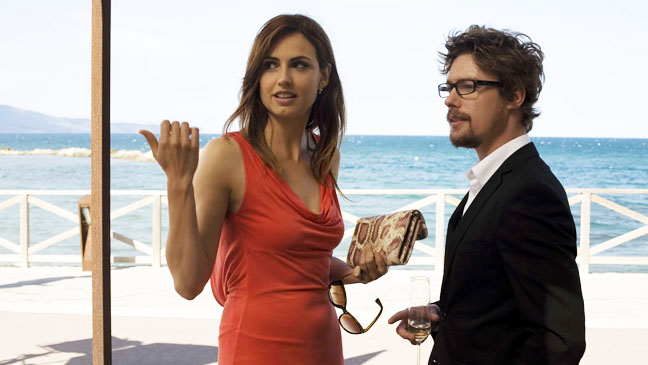