ShockYa had the pleasure of sitting down recently with Jonas Armstrong, star of the upcoming film Walking with the Enemy. The Irish actor portrays Elek Cohen, a Jew in Hungary during the Holocaust who steals a Nazi uniform so that he can try to save his fellow Jews. The film is based on the true story of Pinchas Rosenberg, and opens Friday, April 25th.

Q: What initially attracted you to this film and this role?

A: It’s a great story, first and foremost, and a fantastic character to play. It’s not often that you get to play a character portraying another character on top of that, so that’s what drew me towards it. Also the subject matter, having to do with the Holocaust and the war. It was a sort of no-brainer.

Q: What appealed to you about the Holocaust as a subject matter?

A: It’s still very recent in our history. There are still survivors. Everyone has connections to it, knows somebody who knows somebody who was in the camps. I didn’t really look at other films and watch them and say that I wanted to do be like them. It’s all there in the script.

Q: Where you familiar with Pinchas’ story at all?

A: I didn’t have a bloody clue about anyone dressing up as a Nazi and putting on this façade and this alter ego to save his people. It’s amazing, really, what the guy did!

Q: How is this film different from other films about the Holocaust?

A: Every film has its own story about the Holocaust. I’m not going to say that this is better or more true to life. Every film about that period is borne out of something that actually happened.

Q: There’s obviously an element of this film that’s lighter in some ways. Was there anything that was enjoyable to shoot in this film?

A: We liked doing the opening scene with the dancing. That took about three days to film. We had rigorous period dancing lessons, which you don’t see any of apart from me and Anna doing a little dancing. That was fun because there’s still a youthful energy to them, they’re young, at university, looking for love and drinking. The war hasn’t affected them the way that it has the rest of Europe. To have that and not have a heavy shadow cast over you, it’s like the light relief of the film.

Q: What was most difficult scene to shoot?

A: The scene where I come back to my house and realize that my family isn’t there. We had different takes where I came back and I cried, and other scenes where I’m just sitting there still. It’s so hard to try to imagine the enormity of the situation, not knowing where they are, if they’re alive, what has happened. We did it a couple different ways and we thought it would be stronger if this character is just strong. There a couple of other scenes where you see him break down, but we wanted him to be stoical and strong. But hopefully the not knowing still comes across.

Q: Do you have any memorable stories of working with the other actors, including Ben Kingsley?

A: It’s great to have an award winner like that. I know Ben’s two sons, they’re both actors. I trained with one of them in England. It’s nice to have that connection. We had a fantastic time filming and it was a bonding experience. We were shooting for three months abroad, and when you do film abroad where you don’t go home at the end of the day, you all go back to the hotel and keep each other company. You go for dinner, and have drinks. It was an enjoyable experience.

Q: Was there anywhere you especially liked filming?

A: Transylvania. We filmed there when we did the scene where we were working in a labor camp. That was very rural, like stepping back 150 years.

Q: What was the reaction of the local population?

A: They’d never seen a film crew before. They were really excited, all of the kids were hanging around all the time. It was just turning into spring over there, and the weather was beautiful. It’s a very picturesque place.

Q: Was this a departure from past roles for you?

A: You have to try to be as varied as possible. You try to go from one to the other.

Q: Was there anything about this film that surprised you?

A: No. You take what they give you.

A: I have a film coming out with Mr. Tom Cruise in June called Edge of Tomorrow. I play a character called Skinner, who, funnily enough, I based him on a British football hooligan. Some of these people have a Nazi air to them. That was very different from Alec.

Q: What are some of your favorite films and TV shows?

A: My favorite film is Gladiator. I’m a big fan of Daniel Day-Lewis though, in There Will Be Blood and In the Name of the Father. I’m loving True Detective, I’m watching that as well. That’s big over here? It’s brilliant.

Q: Is there any role you would love to play?

A: I really want to play Iago on stage, or if it’s on film. Whatever interpretation. It’s something I’ve always wanted to do. 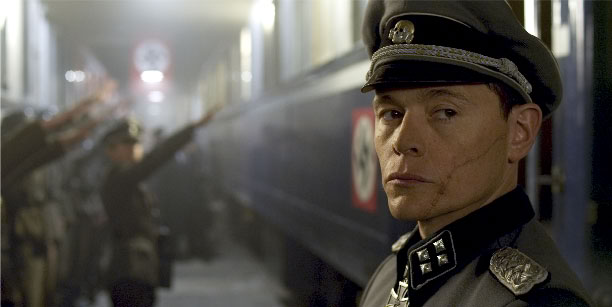