The most emotionally gripping and captivating coming-of-age stories chronicle the relatable struggles young adults are forced to contend with and overcome as they try to make the jarring transition into adulthood. Seeing older relatives and friends easily make that shift into being a responsible adult often leads people to imagine their own future selves achieving their goals and dreams. But when a person is also striving to cope with a mental illness, their idea of growing up can become fundamentally unrealistic. That skewed perception of the world, and what it truly means to mature, fuels the passionately tense independent thriller, ‘Gabriel.’ Rory Culkin gave a powerful performance as the title character in the drama, which was written and directed by Lou Howe, showing Gabriel’s constantly shifting perspective to drive the story’s suspense with an unsettling unpredictability.

‘Gabriel,’ which marks the feature film writing and directorial debuts of Lou Howe, follows the title character (Culkin), a vulnerable and confused teenager who’s searching for happiness and stability. He yearns for his freedom, as he was just cautiously released from the asylum where he spent the past several years. His family, including his mother, Meredith (Deirdre O’Connell) and older brother, Matthew (David Call), continuously emphasize to him that this will be his last chance to demonstrate that he’s capable of functioning outside the facility. However, Gabriel finds it difficult to assume the adult responsibilities expected of him, as his ideas about achieving normality differ significantly from that of his family.

While Meredith and Matthew want Gabriel to take his medication, but he’s more intent on finding and marrying Alice (Emily Meade), a girl with whom he had a childhood romance, but hasn’t had contact with since. What follows is a running clash between his family members, who want him to remain safely home, and Gabriel, who is more interested in sneaking away to pursue his quest.

Culkin and Howe generously took the time to sit down recently for a roundtable interview at the Carlton Hotel in New York City during the 2014 Tribeca Film Festival to talk about filming ‘Gabriel.’ Among other things, the actor and writer-director discussed how Howe wanted to play with film audiences’ misconception of mentally ill characters in movies, so that viewers are never sure what Gabriel’s thinking or capable of doing; how Culkin also liked that the film is constantly catching up with his character and what he’s up to, in order to keep audiences guessing on what he plans on doing next; and how Gabriel chooses to be either responsible or immature when it’s beneficial to him.

Question (Q): You made a film about a young man with mental illness, but wasn’t suicidal. Was it your choice to make a film like that?

Lou Howe (LH): I think people have pre-conceived notions of mentally ill characters in movies, and I was definitely aware of that. I think the movie plays with that misconception, particularly how you’re never sure what the character’s planning, thinking or capable of doing. I think that unpredictability really drives the story. That gave the story a sense of suspense and authenticity to someone trying to manage mental illness.

Q: Did you decide that you didn’t want to reveal how dangerous he really was?

LH: I didn’t want it be clear how dangerous he really was. The idea that he had been dangerous and could be again, either to himself or others, is a question I hope viewers ask themselves.

Q: Rory, was it hard to separate yourself from the character when the shooting wrapped?

Rory Culkin (RC): Yeah, it definitely was. I thought I’d left the character back in Long Island, but I totally brought him home. I was incredibly sensitive for a good while. It took time to shake him off. After seeing the film’s premiere, I was wondering, oh no, am I back where I was?

Q: How did audiences receive the film at the Tribeca premiere?

LH: I think the reception was wonderful. People reacted very positively opening night. It was definitely hard to watch for me; I hadn’t seen it in a while, so it was fresher throughout the year of making it. I still see all the cheats, mistakes and regrets. During the premiere, it was the first time that I actually allowed myself to watch it by the last third, and engage emotionally in the story.

Q: Rory, is it difficult to manage moods when you’re playing such an intense character?

RC: Being depressed or angry was essential to certain scenes, and it all seemed justified to me (as Gabriel). People around me were being ridiculous and I was the only one that made sense in my mind, and that made sense to me.

Q: What were your first impressions after reading the script?

RC: I like that we’re constantly catching up with Gabriel, what he’s up to and what he’s doing next. It’s just a couple of days in his life. It doesn’t start at birth and there’s no narration or anything. We’re just seeing a glimpse into his life. That’s what really attracted me to it.

Q: Do you think his mother was a positive or negative presence for Gabriel?

RC: I think she had a negative effect. Everyone in the world is negative to Gabriel, except for Alice, the one person who understands him. He knows that his mother is not evil and she’s not trying to hurt him, so she must be just stupid. He’s wondering, why are you so stupid?

Deep down, he knows that he has a problem and they (his mother and brother) are probably justified. At the same time he’s thinking, I have this problem because you gave it to me. It’s all a constant circle and goes back to not trusting anyone. I’m the only one that matters.

Q: Do you hope audiences react the same way his mother does?

Q: The grandmother said to Gabriel, “You’re no longer a child. You’re responsible for your own actions.” Do you think he is responsible?

RC: He is responsible when it’s beneficial to him. He’s a child when it works. When you’re trying to tell him what to do, then he’s an adult. He is whatever works for him at the time.

LH: I think Gabriel likes to be considered an adult, but I also agree with what Rory just said. He uses his childishness for his own gain at times. I think that line is especially poignant, because he had already been claiming to be an adult, but his grandmother is calling him out on his immaturity. I think that definitely hits home for him.

Q: Did you ever know anybody like Gabriel, who had that tough relationship with their family?

Q: How much did you stick to the script or improvise?

RC: There wasn’t too much straying away from the script. What was on the paper was so perfect it didn’t need to be touched.

Q: Do you ever get acting advice from your brothers (Macaulay and Kieran)?

RC: We share advice less and less as we get older. We’re all doing our own thing. We’re adults now. (laughs)

Q: Do you prefer independent movies versus big studio films?

RC: It’s never about the money. It’s about the character and whether or not the people in charge are into me. It’s not totally in my control what I do and don’t do.

Q: Do you think that when Gabriel decides to go see Alice it seems like a rational choice?

RC: Yes, it definitely felt rational to him, even if he doesn’t fully grasp why. But Alice does, and she decides she has to let him down. She has to tell him he can’t be following this idea that doesn’t exist. He thought it was rational for a different reason than what it truly was.

Q: Was there something freeing about playing a mentally ill character?

RC: Yes. I liked being able to do anything I wanted and removing my filter. If I felt self-conscious about a decision I made, I would just act on it. If it was too much, we’d try again.

Q: Did you find logic in Gabriel’s disturbed mind?

LH: That, to me, was the best part of our collaboration. We were able to have everything make sense to Gabriel, and really develop this entire interior world. What’s so incredible about Rory is that he can go so deep, and I could trust whatever comes out. You can see the depth, without actually seeing what’s down there. 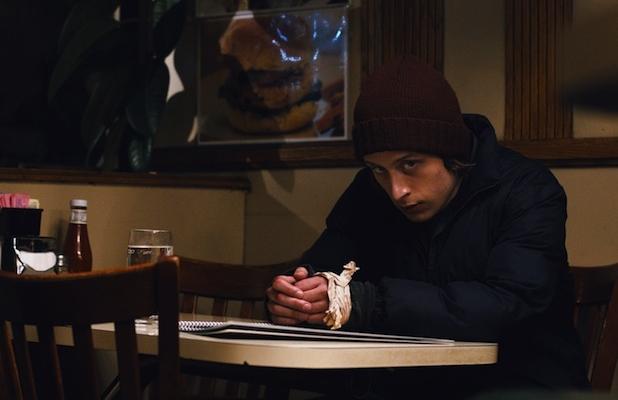