Kids whose parents have the money to send them to sleep-away camp are lucky indeed, assuming that no killers are prowling on the baseball diamond, the swimming pool or the bunks.  That last scenario encompasses the situation found in Jerome Sable’s freshman feature, “Stage Fright,” a revenge fantasy photographed by Bruce Chun in rural parts of Ontario and featuring a cast that includes only two people who could classified as adults.  “Stage Fright” is “Glee” with knives and kabuki masks, with a story that follows the oft-used subgenre of campy (it takes place in camp, after all) but has enough serious action to be taken as straight-out horror.  Think “The Little Shop of Horrors” (a clumsy young man must feed a carnivorous plant by giving it fresh kills), “The Phantom of the Paradise” (a disfigured composer sells his soul for the woman he loves), “Cannibal” (the sole survivor of a mining expedition discovers a taste for human flesh) and of course “The Phantom of the Opera” (a disfigured genius living in the basement of a Paris opera house has a taste for a beautiful singer), “Stage Fright” is a musical.

Sable, who together with long-term partner Eli Batalion composed the all-original lyrics and music, appears to both pay homage to the youthful excitement of Broadway musical theater and mock the conventions at the same time, put together a youthful cast of the types of people that I, as a former, high-school teacher would have loved in my classes.  The entire, wildly enthusiastic patrons of summer camp are expertly choreographed by Paul Becker and, particularly the kabuki phases of the movie, nicely costumed by Michael Ground.

At the center of the action is Camilla Swanson (Allie MacDonald), a 17-year-old with an exquisite voice (think of any principals in a Lloyd Webber musical such as Sarah Brighman), but has been traumatized ten years earlier to hear that her mother, musical star Kylie Swanson (Minnie Driver), was stabbed to death in her dressing room for reasons that we learn as the story unfolds.  When producer Roger McCall (Meat Loaf) decides to air the play “The Haunting of the Opera” after that decade, the director considers Camilla, now working with her brother Buddy (Douglas Smith) as a cook.  Buddy, similarly traumatized by his mother’s murder, urges Camilla not to mix in with the types of people that musical theater draws, but the lovely lass has stars in her eyes and who can blame her?

The music is typical of Lloyd Webber’s style with a mix of Stephen Sondheim, each song sounding much like the others, but we all know that since the passing of Lerner and Loewe, Rogers and Hammerstein, and others, Broadway has never been the same.  Allie MacDonald, who may or not be synched, has a lovely voice and is well cast as a woman often subservient to her brother.  Once the knives flash, the gore is what horror fans go to movies for: multiple stab wounds by a guy or gal hiding behind a kabuki mask and, in one homage to “Carrie,” a can of bright red paint splashes down on Camilla.

For fans of horror and/or music. Is there anyone else? 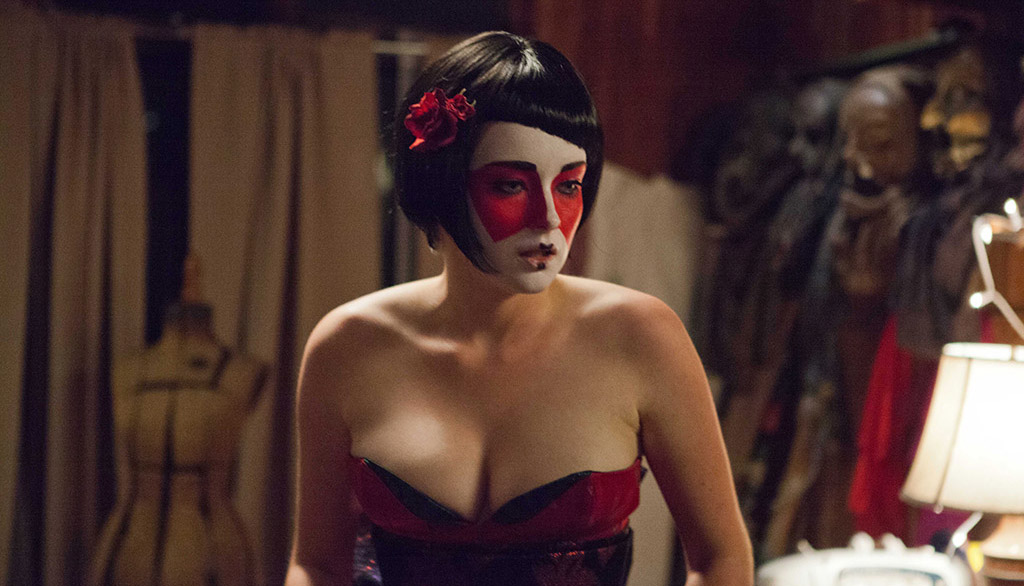