In her book “Quiet,” author Susan Cain argues that introverts prefer listening to speaking; that they innovate and create but dislike self-promotion; and that they favor working on their own over working in teams. It is to introverts—Rosa Parks, Chopin, Dr. Seuss, Steve Wozniak—that we owe many of the great contributions to society.  This may be true, but ask around and you’ll find people believe that extroverts have more fun.  Who wants to be Chopin when you can be Donald Trump?  And if you don’t believe that introverts can be miserable, join the special audience for Richard Ayoade’s “The Double,” a movie even more quirky that his “Submarine,” which was about a fifteen-year-old who has the hots for a pyromaniac and who forges letters from his mom to his dad.

The most exceptional thing about “The Double” is not the story but the cinematic tools that Ayoade brings to this imaginative project.  Filmed in London, an ideal location for capturing dark, dank, foggy and depressing nocturnal scenes, “The Double” borrows from authors and filmmakers considered for their classic style, particularly the expressionists—who distort reality in order to evoke moods and ideas better than physical reality. Expressionists get under the skin of their subjects, theatrically with such plays as Elmer Rice’s “The Adding Machine” (which features a Mr. Zero who is tried, executed, and goes into the afterlife) and Sophie Treadwell’s “Machinal” (about the trial and execution of Ruth Snyder).

Though Rice and Treadwell are familiar only to small number of theater fans, moviegoers will see parallels between “The Double” and Franz Kafka’s “The Trial” (a man is arrested for a crime of which he knows nothing), Jean-Luc Godard’s “Alphaville” (a society of mindless drones), Billy Wilder’s “The Apartment” (an office drudge hands his apartment key over to his supervisors for their trysts), Alfred Hitchcock’s “Rear Window” (a professional photographer in a wheelchair spies on people in adjacent apartments, and Finland’s Aki Kaurismaki’s “Take Care of Your Skarf, Titiana (two shy men run away from their mothers and take off on the road).  You’ll find quite a few other sources, but this does not mean in any way that Ayoade is simply cutting and pasting. The comedy-drama he brings forth has considerable originality and a vivid imagination.

Cinematically, the picture is a triumph, photographer Erik Alexander Wilson contrasting the murky, nourish atmosphere with splashes of brilliant yellows, blues and reds.  The story takes place in an undisclosed location more likely in the recent past than in some sci-fi future, as nobody has an iPhone (land phones are used prominently) and a TV set that the principal character turns in to buy a present for the woman he adores looks some thirty years old.

Eisenberg performs in the role of Simon James, an introvert’s introvert who is painfully shy, tongue-tied, and given to apologize to every person who exploits him, beginning with the guy on an otherwise empty subway car who tells him to relinquish his seat.  He is for the most part invisible.  Even the again mother he cares for has contempt for the man and Mr. Papadopoulos (Wallace Shawn), his boss in a Kafkaesque bureaucratic office, ignores his suggestions for adding efficiency to the company.  He desires Hannah (Mia Wasikowska), a pretty co-worker, but rather than speak up and create a bond, he settles for spying with his telescope on her doings in an adjacent apartment.  His life changes even for the worse when James (also Jesse Eisenberg) a doppelgänger who looks exactly like him, is hired, a fellow who is Simon’s opposite in other ways.  Where Simon is shy, James is outspoken.  Simon is invisible, even to the extent of having a security guard (Kobna Holdbrook-Smith) daily demand that he sign for visitor’s pass though Simon has worked for seven years at the same place.

At first James gives advice to Simon, from simple, hackneyed “You have to go out and get what you want,” but soon exploits the poor guy by demanding a key to his apartment for his trysts, affairs he carries on with the coffee shop waitress (Cathy Moriarty) and the boss’ niece.  He steals Simon’s report to the boss, claiming it for his own, and is promoted promptly to senior executive.  At this point Simon is not taking crap lying down.

What we in the audience wonder is the extent to which James is a real ghostly double of Simon or a product of Simon’s Walter Mitty-esque personality.  In fact, the entire story could be a dream. But whatever your interpretation, you may find “The Double” to be a treat cinematically, an excursion into the joys of expressionist filmmaking.

The principal flaw is that even at its brief ninety-two minutes, the one-joke, or rather the one-dramatic theme, becomes repetitious, running out of steam about three-quarters of the way into the tale.  You may be encouraged to pick up a copy of Dostoevky’s novella, which deals with a hallucinatory nightmare foreshadowing Kafka and Sartre, as a man who is an unimportant official is confronted by a doppelgänger who assumes his life. 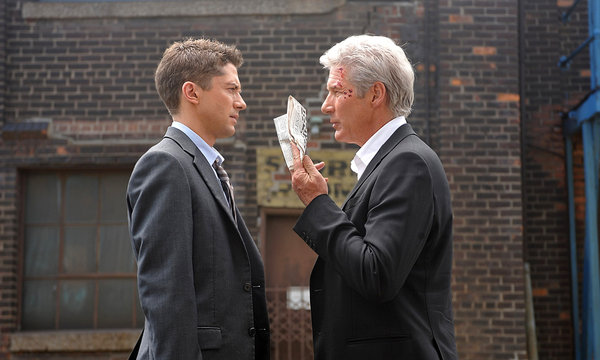