It’s never too late to fall in love again and fix a broken marriage. This seems to be the jolly moral you may bring back with you after seeing this flick.

‘The Love Punch’ predictably brings back together Richard (Pierce Brosnan) and Kate (Emma Thompson), a divorced couple who, after their pension is stolen by an unscrupulous business man, reunite to steal it back.

Director Joel Hopkins creates a whirlwind of mishaps for the two protagonists; it keeps them busy, entertains audiences and most importantly has the background allure of la vie en rose, alas la douche France!

As in his two previous movies (‘Jump Tomorrow’ and ‘Last Chance Harvey’), Hopkins combines romance with humour, this time through a romantic caper about embezzlement, bankrupt employees’ pension funds and re-discovering old love. The general mood that perspires is that of a very amiable midlife comedy and the story in general is – quoting one of the film’s redundant lines – “Stupid. Daft. Crazy. But Brilliant.” The movie works because Emma Thompson and Pierce Brosnan elevate it with their talent, and it is blatant to see how they enjoyed Pink Panthering on the French Riviera. The cast is also enriched by the presence of Mike Leigh’s darling, Timothy Stoll, and the successful actress Celia Imrie, whom we previously saw in ‘NannyMcPhee,’ ‘Calendar Girls,’ ‘Wimbledon’ and ‘Bridget Jone’s Diary.’ The chemistry between the two comedic actors gives off sparks. The cherry on top comes with the glamorous diva, Marisa Berenson, who embodies the quirky-chic owner of the auberge where Richard and Kate lodge, and acts as their Cupid-pronubus.

‘The Love Punch’ could somehow evoke ‘How To Steal A Million Dollars’ thirty years later…not in reference to the date of William Wyler’s 1966 film, starring Audrey Hepburn and Peter O’Toole, but to the age of the new love-dove-burglars: the elderly Thompson-Brosnan, are outstandingly remarkable in this contemporary feel-good movie. 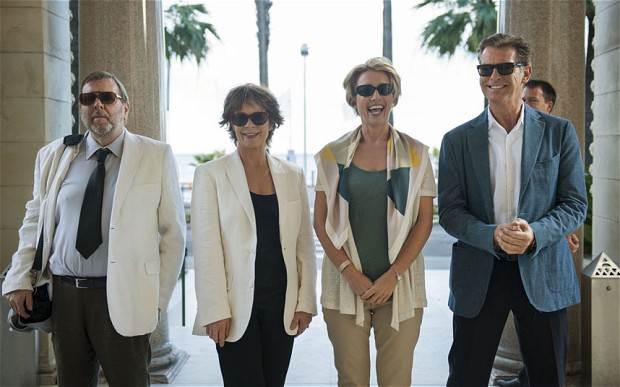