THE ANGRIEST MAN IN BROOKLYN

A sentence of death from your doctor is so difficult to face that according to the Swiss psychiatrist Elisabeth Kübler-
Ross, the unfortunate individual goes through five stages: Denial, Anger, Bargaining, Depression, and Acceptance.  There’s another way to deal with the anxiety, and that’s with humor, with joke telling, as readers of The New Yorker cartoons are familiar.  Take this dialogue:

Doctor: Here is a copy of your lab report.  “There’s good news and bad news.  The good news is that you have 24 hours to live.”

Doctor: “The bad news is that the report came to me yesterday.”

Funny thing about this gag: here it is graphically illustrated in a current movie directed by Phil Alden Robinson, using Daniel Taplitz’s script adapted from Assi Dayan’s 1997 Israeli film, “Mar Baum,” or, “The 92 Minutes of Mr. Baum.”  The difference is that the victim did not have 24 hours to live: he is told by a doctor that he has 90 minutes left, an obvious error brought on by the tension felt by doctor and patient during a hostile consultation.

This concept could be a good one eliciting both dark comedy and serious tragic input, but in Robinson’s hands, “The Angriest Man in Brooklyn” has almost nothing going for it.  Here’s why:

The most serious fault is the director’s apparent insistence that most principal actors are over the top with anger; relentless, pointless, melodrama with just a few attempts to find personality quirks that could redeem these irritating people.  Further, the story has a predictable, sappy ending, one which anyone in the audience could see coming an hour before its depiction—and this movie is only a brief but hard-to-take eighty-three minutes in length.  In addition, we’re asked to believe that the patient accepts the doctor’s absurd prognosis, even counting down to his expected demise at 6:22 p.m.  And what is the patient’s brother Aaron Altmann ( Peter Dinklate) doing wearing a kippah in his Court Street, Brooklyn office, an orthodox Jew, while the patient is apparently secular.  What is this supposed to prove?  And don’t even try to wonder about a verbal clash with an Uzbeki cab driver.

In short the humor lacks the slightest hint of subtlety and the melodrama soon becomes painful to the ears.

The tale revolves around a group of flawed people.  Henry Altmann (Robin Williams), complaining of headaches, visits the hospital where he is seen by Dr. Sharon Gill (Mila Kunis), an internist covering for the neurologist (with whom she is having an affair that looks robotic on the screen).  After being insulted loudly by Henry, who wants only to see his regular doctor, she gets rid of him by telling him he has an hour and a half to live.  When Henry storms out of the office, this pill-popping internist feels guilty, chasing after him, but Henry is determined to live his final moments to reconcile with his son Tommy (Hamish Linklater), who rebuffs his dad’s wish to set him up in his law office because he wants to be a dancer.  To his credit, Tommy does give us a demonstration of a modified tango with his girlfriend and fellow dancer, Adela (Sutton Foster).  In the movie’s most embarrassing segment, James Earl Jones, a towering figure on stage and screen, is reduced to playing a camera salesman with a profound stutter, shtick that goes on and on until Henry takes out his anger on this man as well.  And Henry’s wife Bette (Melissa Leo), shows that she can shout as loudly, confessing to a long affair with a speechless neighbor played by Bob Dishy—whose last appearance on the screen in “The Wackness” took place in 2008.

Robin Williams should leave Brooklyn and go back to Moscow on the Hudson, the one grace that this film offers is some nice shots of my Borough Hall neighborhood, including Junior’s Restaurant, where only one friend, Bix (Richard Kind), shows up for Henry’s party, eating an entire cheesecake;  the famous Court Street of a thousand lawyers; and the bridge, now crowded with tourists but seen here with just two characters, the doctor and the patient. 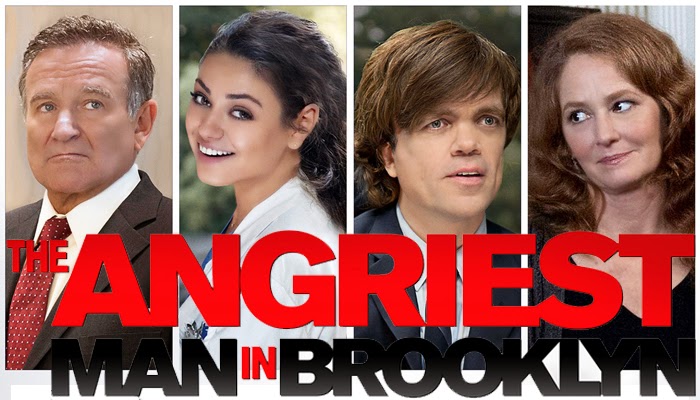