There are Words (Shakespeare, Marlowe, Faulkner, Hemingway), and there are words (teen texts, teen phone talk).  Similarly there are Pictures (Picasso, Rembrandt, Monet, Renoir) and there are pictures (snapshots on Facebook).  An educated person should know the difference: that’s what teachers are for.  Fred Schepsisi, a seventy-three-year-old Australian born director, has contributed Films like “Six Degrees of Separation” (a New York couple find their lives intruded upon by a black man who is not who he says he is) and movies like “It Runs in the Family” (a dysfunctional bunch of New Yorkers who attempt to reconcile).  This time around, he contributes a movie (not a Film), “Words and Pictures,” which takes place in an upscale prep New England prep school (think Choate) filmed in Vancouver city, giving human life to the two abstractions, words and pictures.  Where words and pictures can obviously complement each other, in this case they are at war.  The battlefield consists of Jack Marcus (Clive Owen), an English teacher with a scruffy beard and disheveled appearance, and Dina Delsanto (Juliette Binoche), an art teacher with rheumatoid arthritis which makes it difficult for her to paint or even open a child-safe bottle of prescription pills.  Marcus, or Mr. Marc as the teen students call him, believes that words are superior to pictures, while Dina holds with the cliché that a picture is worth a thousand words.  The battle between these two human representations of words and pictures fires up the honors classes that the two teach leading to an all-out, staged battle complete with slides and poems, each side trying to convince the other about their strongly held positions.

Though Clive Owen plays out of character, a man noted more for action roles, the closest he comes to a similar literary character is in the HBO film “Hemingway and Gellhorn,” about a romance between the American writer and a World War II correspondent.  “Words and Pictures” is a romance as well following the usual format wherein the two principals are kept apart for most of the story but come together at the conclusion.  This is an entertaining picture though overlong, particularly irritating in Owen’s its repetitions of word etymologies as though to one-up his female opponent.

The unreality of the entire tale is not unlike several other stories about teachers such as Mike Akel’s 2006 movie “Chalk,” an improvisational take on the high-school experience as told from the points of view of the educators.  In both cases, each teacher appears to have only one class, the one in which they spend all their energy.  Given the efforts made by Dina Delsanto and Jack Marcus, who give themselves over to their honors group, there is no way they could have anything left to spend on the less brainy youngsters, which means that we have to suspend disbelief and pretend that they each spend an hour a day leading discussions and the rest of the time to, well, in the case of Marcus, to vodka and for Delsanto, to paint.

To the credit of the Juliette Binoche, a French-born actress completely fluent in English, all the paintings on display in this film are her real-life own.  Her character uses the canvases as the needed prop to try to convince the faculty and students that pictures are worth thousands of words, while for his part, Jack Marcus quotes from the great authors with a special emphasis on John Updike, to paint metaphoric pictures.  Never mind that he is apparently facing so much writers’ block that he has to steal a poem of his twenty-something son to pass off as his own, all in the service of keeping his literary magazine alive and to retain his job despite some awkward moments of drunkenness.

For their part, the students in this rom-com run the gamut of brainy and ordinary, wise-ass and naïve, one of them, Swint (Adam DiMarco) making the serious mistake of posting an embarrassing picture of Emily (Valerie Tian), the woman he regularly harasses, on Facebook.  “Words and Pictures” has its moments, but given the irritating nature of the principal character and at least one of the teens destined to be expelled and the overused concept of class warfare, so to speak, the picture outlives its otherwise warm welcome. 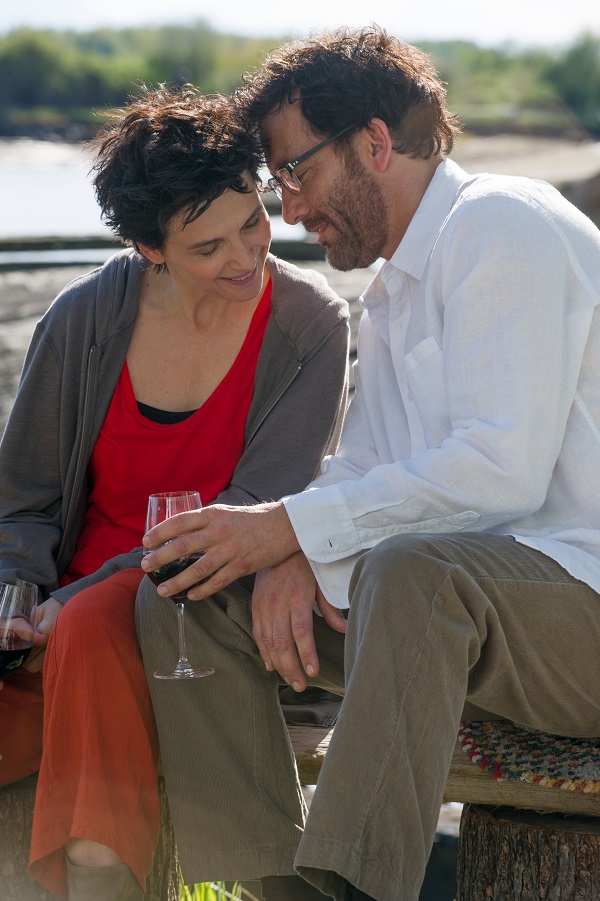