Title: The Gun, the Cake and the Butterfly

Indulgence and inanity collide in the bewildering vanity project “The Gun, the Cake and the Butterfly,” a punch-drunk mixture of “Tarnation,” “The Room” and some lost, axed-in-run-through “Saturday Night Live” sketch of skewered, oblivious privilege. A kaleidoscopic memoir of and by director Amanda Eliasch — a socialite and part-time photographer who exists seemingly to be seen — this navel-gazing non-starter offers zero of interest to anyone not immediately connected to its maker (and even then that might be a stretch).

Eschewing any sort of introduction to who its subject might actually be, “The Gun, the Cake and the Butterfly” immediately back-flip cannonballs into the (infinity) pool’s deep end, with the Lebanese-born Eliasch — who co-stars as herself alongside a variety of performers playing alter egos — announcing in coy fashion that although she’s “approaching a certain age,” that “in a certain light” she still doesn’t look more than 28. The rest of the movie — which blends gauzy recreations, home video footage, unhinged monologues, what may or may not be interview segments with one of the actresses playing her, and other extant footage — finds Eliasch reminiscing about failed marriages, drama school and her penchant for always wearing black. Scattered along the way, along with twinkly recollections of molestation by a 76-year-old gardener as a child, set to jewelry box music, are various non sequiturs like, “By the way, when a woman offers you pudding, beware — they want to steal your husband” and, “I’m not going to be some old blonde strolling down Sunset Boulevard with my makeup hanging down. No, I’m going to be like Marilyn Monroe — I’m going to fuck the president and die.”

If there’s any redeeming element at all to “The Gun, the Cake and the Butterfly,” it lies in the stabs at inventiveness found in the movie’s visual construction and editing. Employing a variety of film stocks, and sometimes bleeding color into black-and-white frames, the film never stops trying to win one over by way of tony audio-visual flirtation. It collapses into utter nonsense, of course, given the utter lack of consequence or interest in its subject, but there’s that, at least.

NOTE: For more information on “The Gun, the Cake and the Butterfly,” visit its website at http://thegunthecakeandthebutterfly.blogspot.com/. 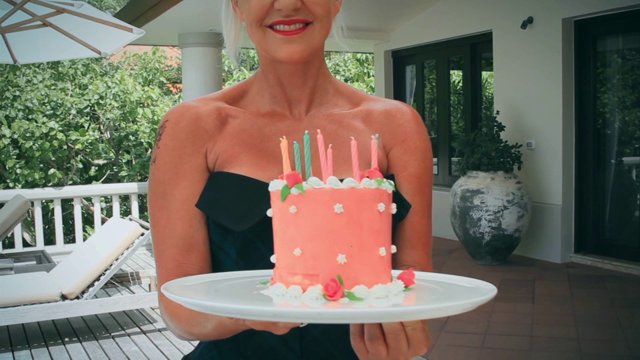